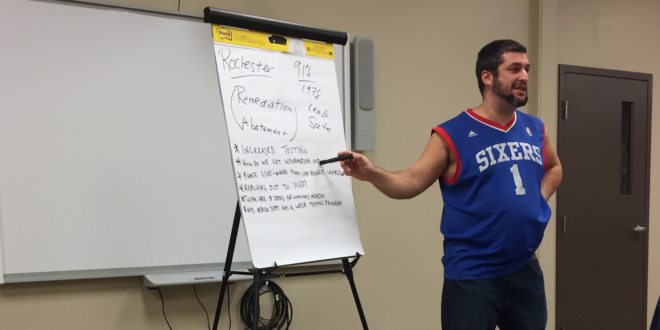 It’s in the soil. It’s on the walls. Dust helps it travel from chipped paint on the door to the air, to hands and eventually the mouth. It is a poison — one that was banned in 1978. But it lingers, often undetected, in the homes of Syracuse renters.

Uplift Syracuse, a progressive advocacy group founded in 2016, has taken up the cause of reducing lead exposure in the city. On Monday, Dec. 11, the group hosted an open meeting to expand its coalition and generate ideas to confront the crises.

The organization found that in Syracuse 91 percent of homes predate 1978, when the manufacturing of lead-based paint was prohibited in the U.S. Legally, anyone selling a home built before 1978 must inform potential buyers of their knowledge concerning the presence of lead-based hazards. 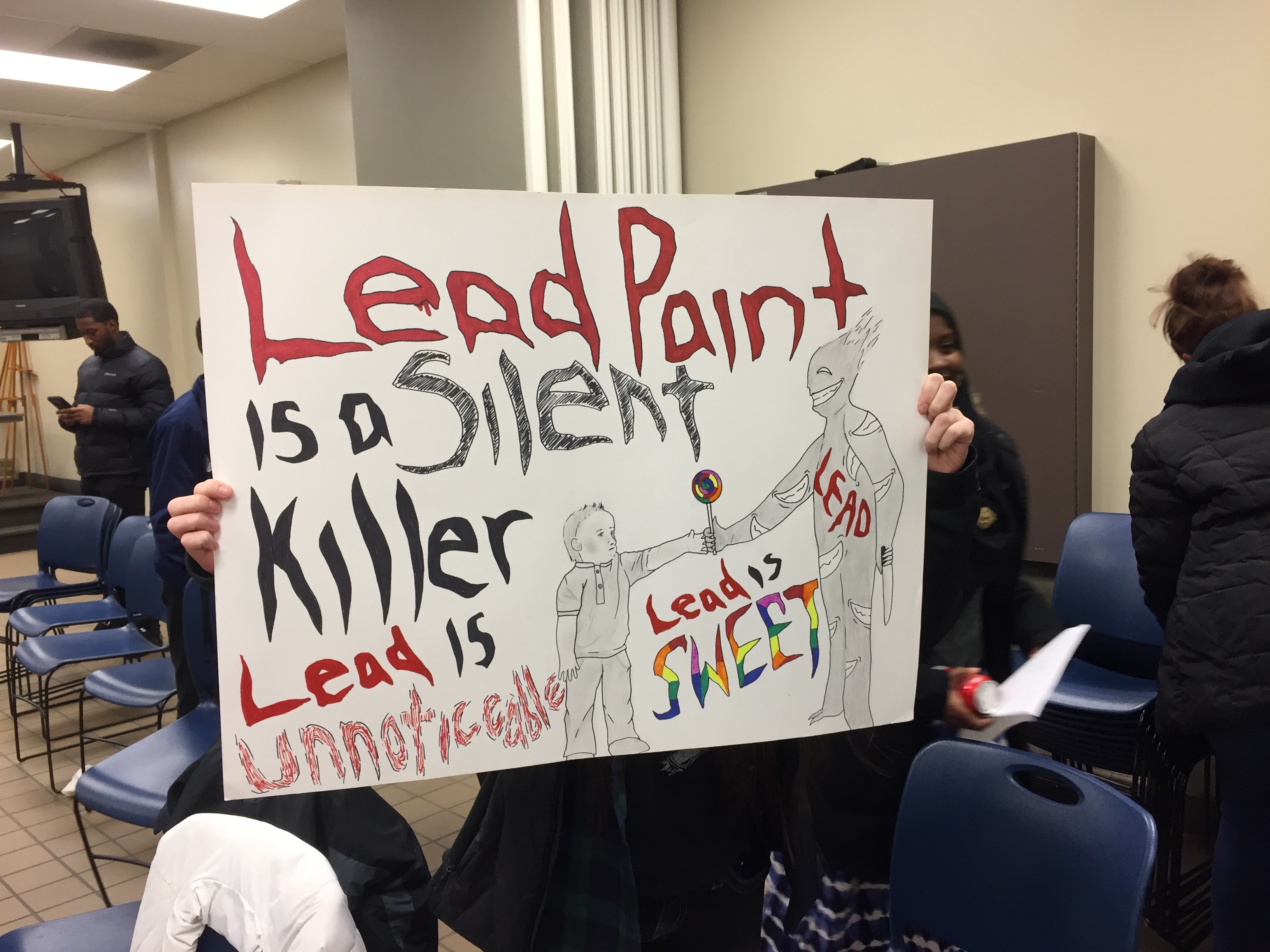 Sign made by student Tien Phao who also wants to create pamphlets in multiple languages to warn all Syracuse residents about the dangers of lead poisoning.

Lead poison dust, however, is slipping through the cracks of local jurisdiction and falling on renters. New York state law does not require landlords to test for lead, nor mandate that landlords allow potential renters to have the dwelling tested.

In Syracuse, the consequences of lead-based paint going untested and untreated are evident. A study, conducted by Quest Diagnostics measuring from 2009-2015, found that 40 percent of children under the age of 6 have high lead levels in their blood. According to the Centers for Disease Control and Prevention, lead exposure can affect brain development and fertility. It can cause kidney damage, high blood-pressure, or in extreme cases, death. In the short term, individuals with lead poisoning may feel weak, tired, irritable, and may experience abdominal pain, a loss of appetite and memory loss.

The city of Rochester has already proven lead exposure reduction is possible. Since its grass-roots coalition formed in 2005, the number of children tested with lead levels over 10 micrograms per deciliter of blood (5 is considered dangerous) decreased by 90 percent.

Uplift Syracuse founder and newly elected Common Council representative for District 5, Joseph Driscoll, spoke to Rochester community organizers to understand their strategy. Two key initiatives helped the city get to where it is today, said Driscoll: passing legislation that allows inspectors to enter rental homes and test the interior for lead and getting elected officials on board with the cause.

The major difference between Syracuse and Rochester today is the provisions of each city’s rental registry ordinances. Rochester’s coalition succeeded in changing city legislation; since 2014, in order for landlords to obtain a Certificate of Occupancy (which must be renewed every three to six years), their rental units must be inspected. Interior inspections are allowed, and “any code violations found on the inspection are captured in a Notice and Order, including whether or not a lead dust wipe test is necessary,” according to the city government’s home website. In Syracuse, inspectors cannot enter the interior of a rental property, and base their reports on only exterior, structural features, said Samantha Linnett, an Uplift Syracuse member and program coordinator for the city’s Office of Innovation.

Last year, a bill to change this legislation went through the Syracuse Common Council but was defeated in a 5-4 ruling. Members of the council feared such a law may violate the constitutional rights of landlords, or lead landlords to file a lawsuit against the city, Driscoll said. 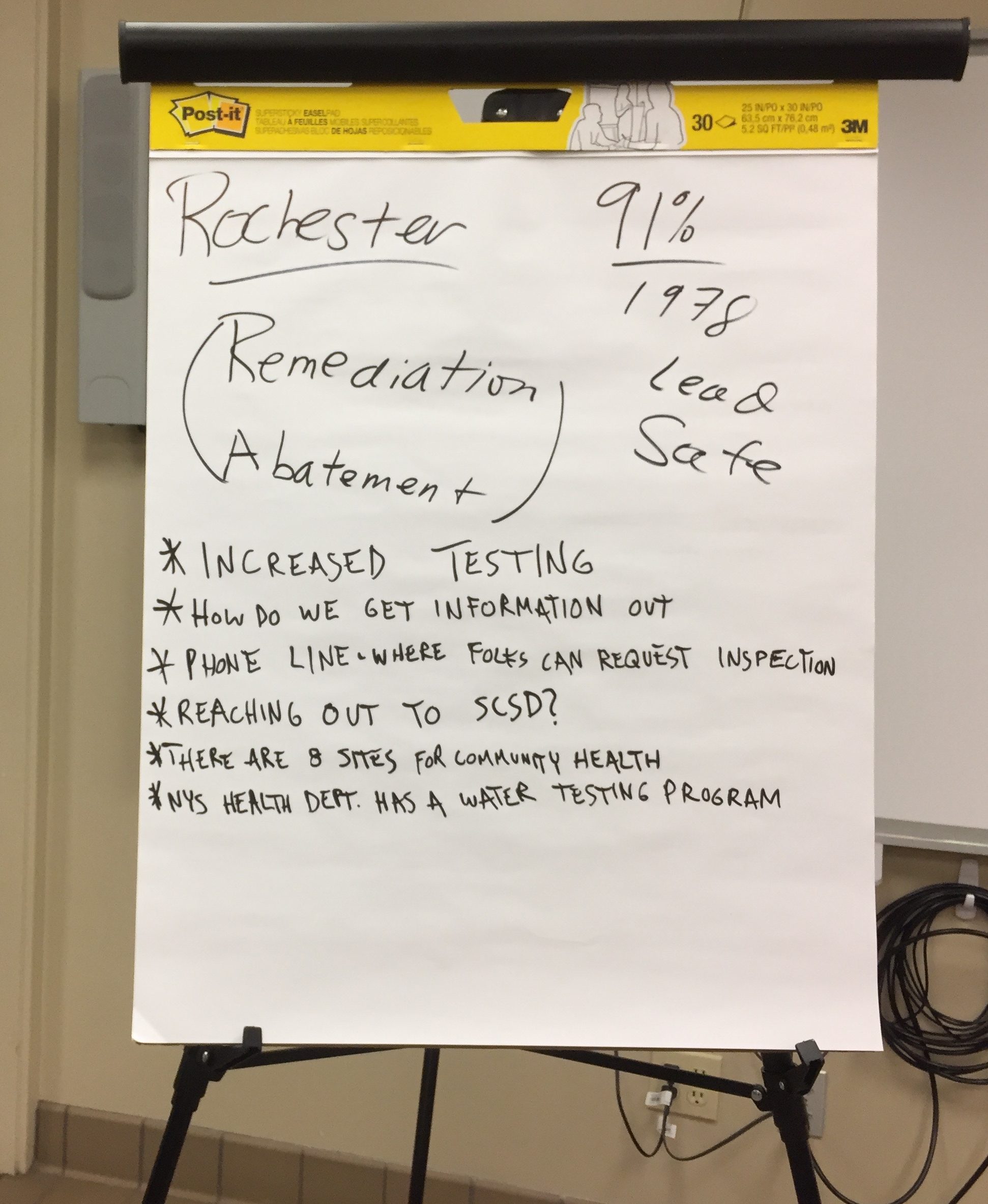 The lead poisoning problem in Syracuse is an intersection of the city’s most pressing issues, Driscoll believes. Community members at the meeting, including an educator for youth with behavioral problems and a South Side criminal defense lawyer, discussed how lead poisoning may be correlated to crime rates since the parts of the city with the highest concentration of lead exposure also experience the most crime.

“I hate reading in the paper studies that show Syracuse has some of the worst rates of segregated poverty in the country,” Driscoll said. “I think this [the lead issue] plays into that, and how we reverse the trends of racial and economic segregation in the city of Syracuse.”

At Monday’s meeting, led by Driscoll, roughly 30 people gathered to develop a plan of action. The community members decided on a few key areas to work on. To reach renters, especially immigrant and refugee parents who learn most community information from their English-speaking children, education programs concerning lead exposure should be implemented at the Syracuse City School District. To increase testing of children of all ages, Uplift Syracuse also plans to ramp up community awareness by spreading informational flyers and going door-to-door to share about the risk of lead exposure and how to get tested. The organization wants to operate a lead exposure hotline, which concerned community members could call to get connected to health services, legal services or inspectors authorized to test for lead exposure within the home.

For further planning, the Uplift Syracuse coalition will meet again a 6 p.m. Monday, Jan. 8, at 500 W. Genesee St. All people of Syracuse, especially those facing lead-exposure themselves, are encouraged to attend.

Paul Ciavarri, a community organizer for the Legal Services of Central New York who attended Monday’s meeting, said that the lead exposure crisis is an equity issue. It’s about bringing into the picture the voices that have been ignored.

As Driscoll said, “This is an issue of providing quality housing for everybody no matter what part of town you live in. Everyone has the right to a decent house.”

— Article and photos by Lindsey McClafferty, The Stand Staff reporter