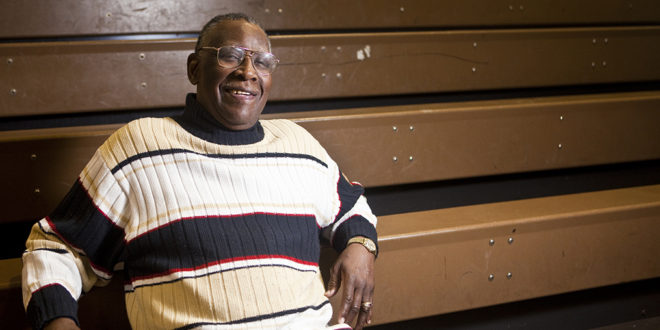 Emmanuel “Manny” Breland served as an educator for over 31 years. He still influences the students he taught over those many years at Central Tech High School. | File Photo

Alumni will gather June 15 for a special tribute

Emmanuel “Manny” Breland, educator for over 31 years, still influences the students he taught back in 1969 at Central Tech High School.

Breland is seen at every community event, says alumnus Barbara Chestnut-Rohadfox. From funerals to jazz concerts to school meetings, he is there.

But too often, it was funerals that brought alumni and Breland together, Central Tech alum Johnny Elliot said. So now, members of the Central Tech class of 1971 to 1973 have organized a celebration honoring Breland’s friendship and kindness.

Alumni have wanted to put together a celebration for a long time. Elliot proposed the idea after a funeral for alum William Stroman’s father. Elliot contacted another alum, Chestnut-Rohadfox, and he put together a mini class reunion.

“The small people, they don’t get recognized,” Chestnut-Rohadfox said. “Not that Mr. Breland needs to be put in the front. With his personality, he doesn’t need a pat on his back. But I ran into so many people who were so appreciative of Mr. Breland. So that is one of the reasons I thought it was imperative that we do this.”

On June 15, the Bethany Baptist Church is expected to host Breland’s family and members of local organizations such as the Dunbar Center, 100 Black Men of Syracuse, the Boys and Girls Club, church congregants, former co-workers and other alumni. Billy McBride, assistant athletic director at Amherst College, is giving the keynote address. Other speakers will also touch on the impact Breland has made in their lives and the community.

“I’m continually thinking about how fantastic it is,” Breland said about the special event. “It is just overwhelming and humbling … for something like this to be contemplated is just beyond anyone’s wildest dreams.”
Breland says he is looking forward to seeing his former students and reminiscing with them.

“I call them kids, but some of them are 50 and 60 years old,” he joked. “They come up to me and they remind me of something that went on.”

Breland says he is also looking forward to tease his “kids” about having to deal with their children now, calling it “karma.”

“(Many former students) gave me so much hell and that’s why now they’re getting that from their kids,” he said, adding they all laugh about that now.

It’s the small gestures and care Breland shows that makes him an “unsung hero” to Central Tech’s alumni, Chestnut-Rohadfox said. Breland’s accomplishments are historic. He is the first African American to receive a basketball scholarship to Syracuse University, and he was also inducted to the Syracuse Sports Hall of Fame in 1992. To Central Tech students, he is more than a principal, vice principal or a basketball coach.

“A lot of times we talk so much about Martin Luther King Jr. What happened to the unsung heroes? And to me Mr. Breland is a hero in our community,” Chestnut-Rohadfox said. “In his 80s, if he was in this room right now, you would never even know he’s a hall of famer.”

Chestnut-Rohadfox knew she could always reach out to Breland when she needed to. In 1971, she was suspended for smoking in the girl’s bathroom, something she claims she didn’t do. Breland got her back into school.

“He had a listening ear, you know, and it didn’t matter whether you went to class or not; it didn’t matter,” she said. “Whatever the scenario was, he wasn’t just a principal. I think he was a person who was touchable, and you really don’t find that today.”

Breland’s mere presence is empowering, Chestnut-Rohadfox said. For alum Earl Scruggs, seeing an African American teacher and vice principal was eye-opening. It’s not common in the South, where he is from.

“He was quiet,” Scruggs said. “Very quiet. But, in our time, a powerful individual that we needed.”

Breland was always there for students who were going through rough times, missing classes and not doing their work.

Elliot remembers Breland asked him if he was OK, sitting by a window in the hallway during class time. Elliot’s mother was in the hospital at the time. Breland didn’t question Elliot for not being in class. Instead, he looked after a student.

“To me that was like, wow,” Elliot recalled. “He’s looking at me as a father figure, you know a father wondering what’s wrong with his son.”

Elliot isn’t the only alum who thought of him this way. Max Jones, now a pastor in Syracuse, gets a surprise visit from Breland at the Apostolic Church of Jesus Christ every once in a while.

“He will just show up without any invitation to show his support for one of his former students,” Jones said. “That has meant so much to me every time that he would come saying ‘I’m so proud of you.’ That’s something an uncle would do.”

Breland kept Jones’ father involved in his academic and athletic career. They’d work together, deciding what kind of discipline Jones would get as a kid. Jones says he was admitted to Cornell University thanks to the guidance.

“A large degree of my success as a man, as a person, as an adult, is due to Mr. Breland,” he said.

Much of Breland’s work remains behind-the-scenes but doesn’t go unnoticed by his former students.

“I would have to say he probably saved a lot of lives,” Scruggs said. “Yes, trust me on that one.”