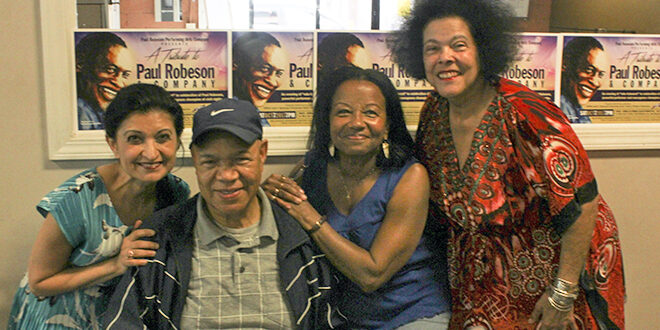 When asked from where she got her Ph.D., poet, playwright and activist Jackie Warren-Moore responded with “I Ph didn’t.”

Rachel Guido deVries, also a poet and longtime friend of Warren-Moore, with whom she performed many shows, explained that that was exactly who Warren-Moore was.

“That was her response,” Guido deVries said. “She wasn’t defined by anything other than her work and her heart.”

Jackie Warren-Moore left this world Aug. 20, 2021. The beloved artist was 71 at the time she died. Her memorial service was Sunday, Aug. 29.

Warren-Moore, who was born in Elmira and who grew up in Syracuse, barely finished high school to next enroll in college at SUNY Oswego, but she never graduated. She was missing three credits.

Her friend, Anne Margaret Childress, who is a professor at Syracuse University in the Department of African American Studies, had always joked over the years that Warren-Moore should take her class for her remaining credits to obtain her degree.

Warren-Moore did achieve big things in life; she had a number of poetry books to her name including “Where I Come From,” published in 2016. She was also an activist who often spoke out against brutality and oppression, and attended protests and Black Lives Matter marches. In addition, Warren-Moore wrote for newspapers in Syracuse and she was a teacher of poetry at the Community Art Folk Center at Syracuse University as well at area prisons.

She was also a mother and a wife: Warren-Moore left her husband Andy and her children SonCeria Warren, Andrea Moore, Joi Moore and Mia Moore on Aug. 20. She was 71 years old.

Andrea Moore, the second eldest, wanted us to remember her mother as a great welcoming soul.

“My mother literally made everyone feel welcome. Wherever she was, whatever she did,” Moore said.

Her daughters, Andrea and Joi, remember their mother frequently speaking out against things that mattered but also as someone who cherished the good.

She also encourage others to be vocal as well.

Warren-Moore loved to spend time with Syracuse’s youth and went to many schools to teach and inspire them to share their voices.

Nancy Rhodes, a dear friend of Warren-Moore, said that in her death, the community has lost the value she brought to children.

“They would send her the toughest kids that were getting in trouble, snapping out, breaking things and having outbursts,” Rhodes said. “And Jackie would get these kids in poetry workshops, and they would stay with her. They would be able to put some things into words.”

Rhodes said that Warren-Moore always wanted to get involved with the community and use art to fight oppression, racism, sexism — any issue she cared about. The poet would also go to prisons and do readings, even if it was in the middle of a blizzard.

Bob Herz, her publisher, also recalled a time Warren-Moore wanted to buy coffee for two police officers, who ultimately refused, but who were so impressed and shocked by the offer.

Warren-Moore would go above and beyond to change people’s lives.

Two years ago, Warren-Moore suffered a stroke and took a long time to recover. In the midst of that, Warren-Moore had a knee replacement, but complications ensued, and the doctors ultimately amputated her leg. She was in recovery once again and hoping to get better.

Charles Jackson, a music producer, who knew Warren-Moore for a long time said he was in shock when he found out that she had died.

“I’m definitely gonna miss her. She was like a second mother to me,” Jackson said.

Childress said that the news broke her heart. The Syracuse University professor would call Warren-Moore often to ask for her opinion on theater projects. She’d also ask for referrals for singers and other artists she could get for shows from Warren-Moore.