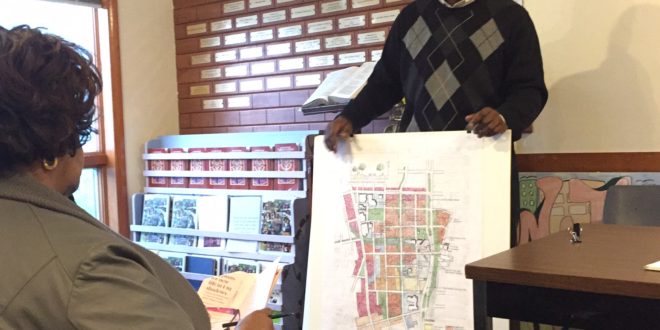 Bill Simmons, executive director of Syracuse Housing Authority, served as the special guest during a joint meeting of the Syracuse United Neighbors Southside Coalition and Southwest Action Council on Tuesday, May 9. He spoke about SHA’s own comprehensive plan in preparation for future work on the elevated portion of I-81.

While the New York State Department of Transportation works to decide on a final plan – now said to be narrowed to three: do nothing, keep and expand the overpass or tear down and replace with a street grid – Simmons said SHA developed its own preferred concept in an effort to improve the East Adams Street neighborhood and deconcentrate the area’s poverty. Because SHA owns nearly 55% of property beneath or surrounding the aging overpass, he believes this gives the housing authority significant leverage on the future revitalization of this area.

“We still don’t know what is going to happen – will they rebuild to federal standards, which means the overpass must be widened,” he began, “or will they build the street grid or tunnel, which is unlikely.”

Yusuf Abdul-Qadir, director of the Central New York Chapter of the New York Civil Liberties Union, posed several questions and shared concerns that limited information has been shared on how the construction process will impact residents.

Simmons said there is no intent by the DOT to take SHA property, but there will be immeasurable disruptions, greatly impacting SHA neighbors.

Simmons said SHA is working to negotiate once a plan of action has been announced to help protect the health and quality of life for residents. For example: replace existing windows in Toomey Abbott Towers with soundproof ones to keep out the construction noise, install air-conditioning and even possibly partnering with Upstate Medical University to do pre-respiratory testing of residents to establish a baseline of their health in case concerns arise from construction dust. 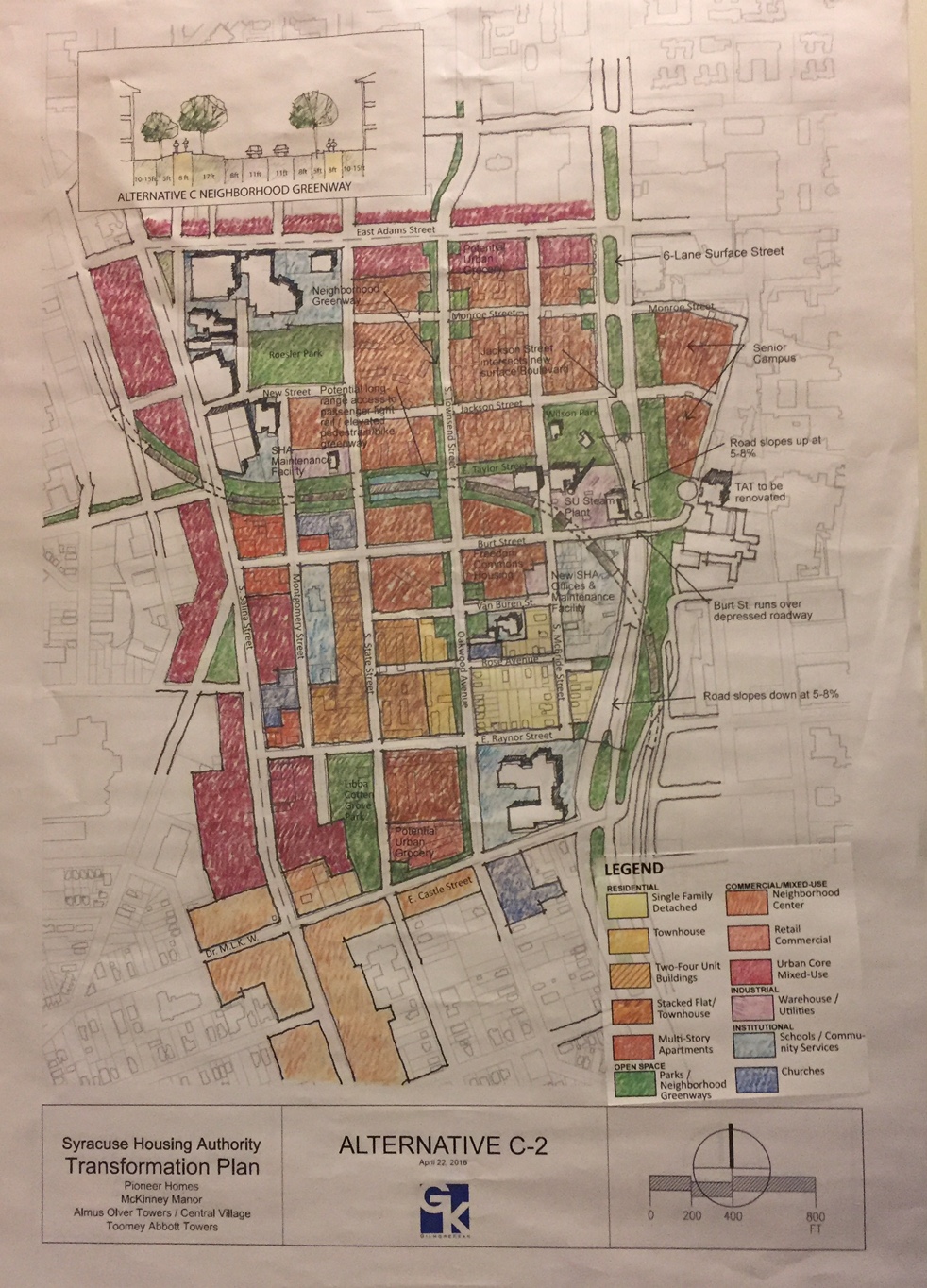 The SHA board decided to support the street grid alternative, with its plan calling for mixed-use, mixed-income housing; additions of commercial development to bring in banks, daycares and a grocery store, along with market-rate family units and a combination of low-income housing. “Because this location can attract a wide variety of people, a combination of units is needed,” Simmons told the crowd of nearly 35 residents who had gathered at the Brady Faith Center.

SHA’s master plan examined a 27-block area from East Adams Street on the north to Dr. Martin Luther King Street on the south, and from South Salina Street on the west to the I-81 corridor on the east. Currently Simmons said SHA offers 1,400 units in this area. “Our plan will take it from 1,400 to 2,100 units,” he said.

The report states one goal is to: “Facilitate the development of mixed-income housing and neighborhoods in order to create a real ‘Neighborhoods of Choice.’” He noted that redevelopment will create greater accessibility to the many adjacent assets to the neighborhood such as downtown, hospitals, social service agencies and schools.

Another question many asked was which residents would be the first to relocate. Simmons shared that the SHA plan calls for development to be done in stages and tenant protection would be provided through relocation vouchers. These would allow current residents to move elsewhere – within Syracuse to even New York City, Atlanta or any other city – while construction takes place and then return to new units once development is complete. “This plan will create new housing opportunities for residents to move into.” Announced in January, Freedom Commons is a proposed 54-unit, three-story building to be built on Burt Street. Additionally, 16 acres of vacant land, much owned by SHA, can provide further opportunities to build new housing and provide additional local relocation options for existing residents.

For its comprehensive plan, SHA hired and worked with Gilmore Kean, LCC, a consulting firm out of Washington, DC. In 2016, Simmons told Syracuse.com that SHA paid the consultants $227,000 to develop four plans.

Tuesday evening, Simmons shared that SHA worked with the firm for 18 months, which included eight neighborhood meetings with SHA residents, special meetings with refugee residents, the mayor, state delegates and leaders at Syracuse University and Upstate Medical University in order to get everyone’s input into the final designs. “We’ve also surveyed families in the area to see what their needs are,” he added, noting that SHA worked to include a wide variety of perspectives.

South Side advocate Aggie Lane asked about a unique alternative plan proposed by Jacob Alan Roberts, who recently circulated his idea via an open email to various stakeholders. Roberts runs Crystal City 315, which the website states serves as an artist advocacy organization, as well as an eco-sensitive property developer, with a mission of creating and preserving affordable live/work space for the creative class. His proposed idea would resemble the New York City High Line, a re-purposed piece of aging infrastructure that was transformed into an elevated community green space.

He writes: “… instead of demolition, we ‘recycle’ that monstrosity of an elevated eyesore and confront it as a daily reminder of our long-standing traumas surrounding its construction, our displeasure with its appearance …”