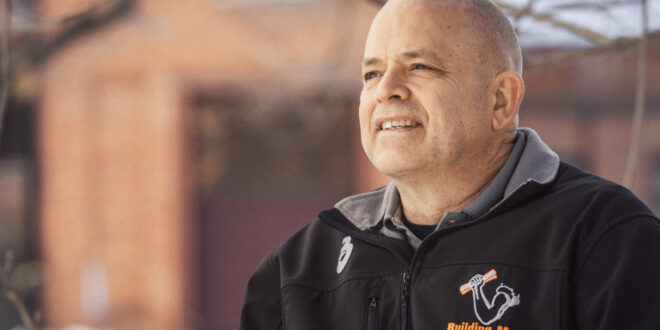 Joe Horan is the director of The Building Men Program in Syracuse. | Provided Photo

Director stresses importance of building relationships, challenges the concept of what it means to ‘be a man’

Joe Horan was doing everything right — by society’s standards. He got married. He bought a house. He successfully coached the middle school basketball team. He had it all figured out.

But when his relationship with his wife fell apart, Horan had to take a step back and reassess who he was as a man.

Horan, who was working as a physical education teacher at the time, was in pain and needed a change. Society’s expectations of manhood had let him down. Now he felt determined to teach his students another way through The Building Men Program.

In 2006, Horan scanned the gym at Levy Middle School watching the boys playing basketball when he had an epiphany: someone had to teach them that society’s message of what it means to be a man was wrong — before it was too late.

A Syracuse native, Horan grew up on the West Side and attended Fowler High School. After attending Herkimer County Community College, he went to SUNY Cortland and then returned to teach in Syracuse, starting as a middle school gym teacher.

He launched The Building Men Program 13 years into his teaching career. The seeds were first planted after Horan read the book “Seasons of Life” by Jeffrey Marx which tells the story of Joe Ehrmann, a former NFL star. It taught Horan about being a healthy man and instilled values within him that he still emphasizes in The Building Men Program to this day.

His effort started as an intramural basketball team and then shifted to an after-school program that has grown to offerings in seven middle schools in the Syracuse City School District.

Sean Drake, a sociology professor at Syracuse University, says programs like Building Men “teach students the pathways to education.” Middle school is a pivotal age to target; students tend to fall off when they no longer think they’ll succeed, Drake says. These programs, he adds, can help fill in the gaps that occur in lower-income communities.

“Often we see this slippage between student aspiration and expectations,” Drake said. “They have really high aspirations. They know what success looks like to them and their families, but their expectations are lower because of stereotypes, because their school doesn’t have the resources they need and because they’re worried about safety in their neighborhoods.”

Through The Building Men Program, Horan aims to teach these young men that there is a bigger world than the one that is throwing them aside. Participants include young males from the city of Syracuse, many of whom are minorities. Horan makes sure to bring in speakers that serve as positive role models.

“I think it’s important for young people to see others who look like them and come from where they come. Those who can understand their situation and show them the way,” Drake said.

Horan incorporates the outdoors into his lessons by having students take field trips to the Orenda Springs Experiential Learning Center where they go through the “Rite of Passage.”

At the center, they take part in physical activities that force them to work together and take on leadership roles, Horan explained. The participants of Building Men learn of future career paths that may relate to their interests in nature and the outdoors.

“Our education system doesn’t do a great job in getting to the kids who are not good at math and reading,” Powers said. “When they come out here, they learn how to use [other] skill sets, and we turn them into leaders. Kids who have a tough time leading at school become leaders out here because we give them opportunities that they’re good at.”

Horan agrees and pushes his mentees to be guided by significance, integrity and values and one who builds relationships (S.I.R.). He defines a man as a “sir,” thus reiterating these virtues.

He says it’s about living for a cause greater than your own and “following your truth north.” He wants his students to be “a man, not the man.”