How Community, SU Partner to Help Rejuvenate South Side

Syracuse University kept these benefits in mind when it attempted to engage the South Side residents of Syracuse in 2005. The geographic target area was a three-block radius using the corner of South Salina and Colvin streets as the hub.

SU knew that to facilitate a successful relationship, both SU faculty and students and South Side residents had to be actively involved in decision making, goal formation, planning and implementation.

Out of numerous meetings between SU and South Side residents came the beginning of The Southside Community Coalition, or the SCC. The University worked with residents to identify community needs and possible partnership projects. These projects were then reviewed by SU faculty and officially presented to approximately 50 University faculty and senior administrators on Sept. 22, 2005. The Syracuse University South Side Initiative officially began Oct. 1, 2005. The South Side Initiative is a community-university partnership program involving the SCC and SU schools, colleges and departments. The mission of the partnership is to restore, revitalize and rejuvenate the South Side. 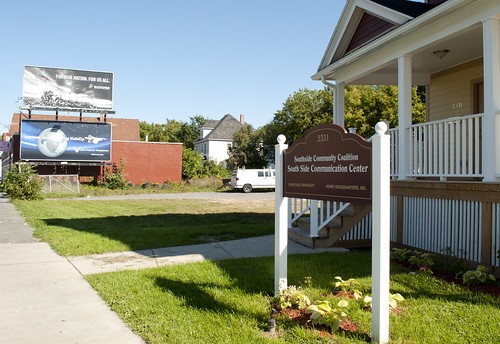 The Southside Community Coalition is planning to build a food co-op in the empty lot next to the South Side Communication Center located on the corner of South Salina and McKinley streets. -- Photo by Lena Budd

Some of the potential partnership programs identified in 2005 include: a summer music festival, a cultural arts center, a community newspaper, a technology center, an Internet café/jazz supper club and a food cooperative.

Some of the projects have already come to fruition. The summer music and art festival took place in 2006 and 2007 at the corner of South Salina and Colvin streets. The cultural arts concept began as The Kuumba Project. The program was conceived, implemented and managed by the partnership in its first two years. It provides artistically gifted Syracuse city school children with opportunities to unlock their creative potential through free instruction in visual art, music, dance, theater and the literary arts.

In keeping with the original intent, it now is managed by the Community Folk Art Center under the new name Creative Arts Academy.

The community-operated newspaper, “The Stand,” successfully launched its online edition in 2009 and its print edition in March 2010. The newspaper provides clear and balanced reporting of news and information for the South Side community and reasonably priced advertisement options.

The SCC and SU partnership sponsors an annual South Side Film Festival. Family-oriented films are shown in the parking lot of Key Bank, located at the corner of South Salina and East Colvin streets, during July.

The partnership is responsible for the South Side Communication Center, located at 2331 S. Salina St. The center serves as an open-access computer cluster providing residents with free public access to computers with Internet connection and on-site assistance. Hours of operation are 3 to 7 p.m. Monday through Friday.

Syracuse community businesses and organizations are able to reserve meeting and workshop space in the South Side Communication Center.

The partnership is in the final stages of developing a food cooperative dedicated to bringing high-quality, reasonably priced foods and products to South Side residents while also creating entrepreneurial opportunities.

All of the programs developed by the SCC-SU partnership happened with the support and assistance of community businesses, agencies and organizations.

Thank you for your dedication.

— Column by Shante Harris El, vice president of The Southside Community Coalition and a member of the board of directors for The Stand