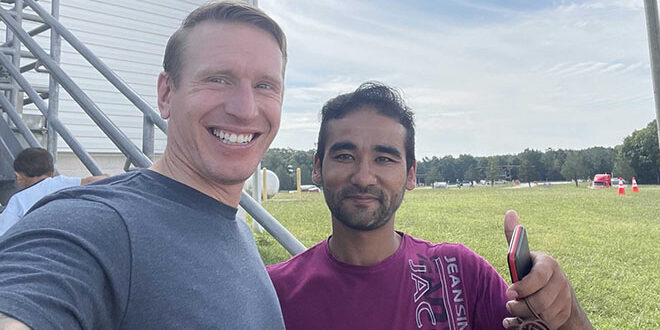 Mohammad Raziq and his family were safely aboard a flight from Kabul to Qatar when a suicide bomber struck the airport they’d left behind three hours earlier, killing 170 Afghan civilians and 13 U.S. troops. Six months later, Raziq, a father of four who served as an interpreter attached to U.S. Special Forces in Kandahar, works at a convenience mart in East Syracuse.

“We are all OK,” Raziq emphasizes. “We are all safe. We know the meaning of life now. Before, all the time we were in danger.”

Similar expressions of relief and gratitude echo through the population of roughly 400 Afghans resettled in Syracuse after the fall of Kabul last August. But while genuine, those sentiments don’t  tell the full story.

Their journey here was chaotic, perilous and heart-wrenching. Careers and dreams were abandoned in the span of a week. Key documents were destroyed in the panic to avoid detection by the Taliban. Because they are considered “humanitarian parolees” versus UN-sanctioned refugees, their immigration status is muddled — except for the looming deadline.

Then there’s the biggest worry of all — friends and relatives left behind in a Taliban hellscape. In a cruel twist of technology, many escapees need only pick up their cell phones to hear the anguish of loved ones suffering from insufficient food, medicine and freedom of movement.

Sharifeh Mohammadi, a caseworker at the refugee resettlement agency Interfaith Works, said her uncle, Chopan Ali Qambari, escaped to Iran but his wife and children never got out. Yet he is still able to communicate with them and with Mohammadi. The updates are excruciating. Sharifeh knows in terrible detail how her young cousins can no longer go to school or play outside but don’t understand why. And that her Uncle Ali is shattered.

”He is always crying — a grown man crying on the phone,” Mohammadi said, near tears herself.

Not surprisingly, mental health issues are cropping up among the 76,000 Afghan newcomers to the United States since August.

Andrea Shaw, an Upstate Medical University physician who heads its Refugee Health team, noted in a hospital podcast that Afghans who worked with the U.S. Army might have envisioned immigrating here one day, but others “did not expect their whole lives to turn upside down” — in many cases with husbands separated from wives and parents from children.

“That’s been the most jarring thing for those who are here, without a clear path forward as to how they’re going to reunite their families,” she said.

Arsalan Sultani, 25, a new resident of Syracuse’s North Side, served as a military guard in the deposed regime. Now he’s being treated at Upstate for depression. He said he worries constantly about his brothers, Hares and Arian, who are in grave danger of retribution from the Taliban. Hares worked in national security; Arian was a TV journalist.

“There is no hope they can get out,” Arsalan said forlornly during a recent interview at Interfaith.

Due to so many stressors, local advocates say this population is different from previous waves of refugees — more likely to experience depression, survivor’s guilt and disorientation. Unlike refugees who arrive via more conventional pipelines, these newcomers have not had years in refugee camps to process their losses and contemplate a new life. As the adrenaline of August has subsided, observers have increasingly seen the mental health consequences of so much trauma in so little time.

“You left behind Mom, Dad, home, your job — this  is a big deal, a bigger deal than we first thought when they first started to come,” said Interfaith Works President and CEO Beth Broadway. “This is going to take people years to sort out emotionally.”

Financial pressures, which include inflation and an eviction moratorium that has driven up rents, aren’t helping. Interfaith was recently awarded a $65,000 grant from the Central New York Community Foundation to help defray basic living expenses. Initially the federal government provided no transition funds for Afghan arrivals, placing the burden solely on local relief agencies. Although that has changed, Broadway said many families are getting a crash course in what it means to be poor in America — in a harsh Central New York winter no less.

“We have snow two or three times a year (in Afghanistan),” Raziq said. “But here there is snow every day.”

Some breadwinners aren’t just cold — they’re beset by feelings of uselessness  because they can’t legally work as their immigration cases languish. Even if they can work, like Raziq, there’s the complication of telling prospective employers you might not be living in the United States after September 2023 if the door to permanent residency slams shut. Refugees have less than two years to apply for asylum. Their outcomes are far from certain as each case will be adjudicated individually.

A call has gone out for pro bono legal assistance.

“No Prior Immigration Law Experience Required, We Will Train and Support You,” blares an e-flyer from Hiscock Legal Aid Society and Volunteer Lawyers Project of CNY, partnering with Interfaith and Catholic Charities/Northside CYO.

During a recent Zoom meeting, local immigration law experts urged prospective volunteers to answer an online survey about their skills and interests. The survey can be found at https://www.surveymonkey.com/r/SC9PLG2.

Another way to help, advocates say, is to phone Congressional representatives to urge passage of the Afghan Adjustment Act, which would allow Afghan parolees an opportunity to seek lawful permanent residence. The measure appears to have bipartisan support

As byzantine, intimidating and urgent as the legal drama has become, its source is simple. The usual vetting that takes place long before refugees can immigrate to the United States didn’t happen here because Afghanistan’s government unexpectedly collapsed within days. People arrived, but their paperwork did not. Add to that the life-or-death decision to destroy personal documents, and it’s easy to see why Syracuse’s newest refugee population faces unprecedented uncertainty.

Sultani, who lives on the North Side with his wife Fatima and their three-month-old, Rahel, said he was one semester shy of a political science degree from Esteghlal Institute of Higher Education in Kabul. His transcript never made it onto the military transport out of Kabul.  Now there’s no way to prove he even took a course there. Fortunately he, too, is authorized to work. Expressing a sentiment common among his displaced compatriots, he said he is open to “any kind of job.”

Despite his melancholy, Sultani made a point of repeatedly stressing that American military and civilians have been kind and helpful through the ordeal and that he has “no problems” in Syracuse.

“My only worry is about my family there,” he said.

Tragically, time and hope is ebbing away for those left behind. Anyone with ties to the U.S. war effort isn’t safe in their own homes — merely having a relative who fled to the United States puts people at risk — so they’re hiding elsewhere in Afghanistan.

“It’s not safe for them to be where they were,” said Holmes, of Catholic Charities. Family separations are tragically endemic. Syracuse is seeing fathers with wives, children left behind and the reverse. And there’s almost no hope of a reunion.

“They’re essentially Anne Frank right now,” he said of the thousands in hiding. Lois is a member of Task Force Pineapple, the post-evacuation generation of Pineapple Express, the all-volunteer Afghan War veterans group that pulled people out of the country. One of the comrades he got out was Raziq, his translator, although he says that title does not do justice to the brave allies who assisted Special Forces far beyond translation duties. Many translators also performed recon and logistics support without which U.S. troops would have been effectively blind.

Lois is still working to liberate many former Afghan soldiers who were trained by the U.S. and fought the Taliban until the end. One is Mohammad “Taqi” Ibraham — a Special Forces Command Sergeant major — who stayed behind to provide intelligence critical to the evacuation. The hope was there’d be a way to extract him later. It’s starting to look like a long shot at best.

“All the intelligence he brought back helped build the Pineapple Express, and then he himself did not get out,” Lois said.

Jeff Kramer is a reporter and columnist for The Stand. He has contributed to newspapers for many, many years in Syracuse and elsewhere. To contact him with story ideas, call (315) 420-2619 or email jeffmkramer@gmail.com