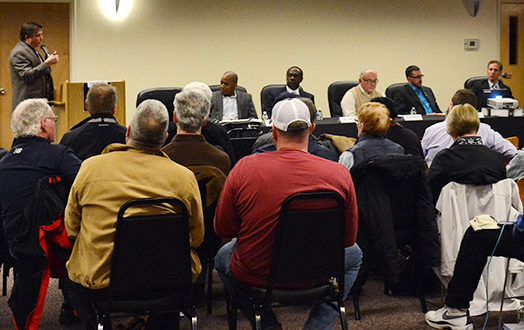 I-81 Viaduct Project Director Mark Frechette discusses potential options for highway construction during a meeting April 6 at the South Side Innovation Center.

Panelists explain their viewpoints on options for changes to highway

Any question about how deeply South Side residents are interested in the future of Interstate 81 ought to have been laid to rest in April when a crowd of residents met with state and local officials offering an update over what to do with the aging roadway.

“We’re here tonight to weigh the pros and the cons, and to be open-minded — to really see for yourself,” said Angela Wright, executive director for the Syracuse Model Neighborhood Corporation, to the crowd at the South Side Innovation Center. “You know, hopefully your questions will be answered.” 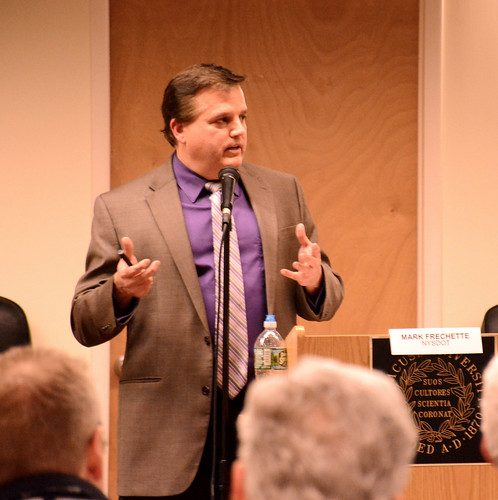 Mark Frechette, the I-81 Viaduct Project director for the New York State Department of Transportation, said the two plans the state is considering call for either a completely new bridge to be built through downtown Syracuse, or to re-route I-81 outside of the city using the existing roadways of I-481. Both would require substantial financial investment, and would take four and six years to complete, respectively. The projects are estimated to cost $1.7 billion and $1.3 billion, according to the Department of Transportation’s website.

The new viaduct plan would make no changes to the actual highway, but would simply replace the current viaduct with a wider bridge with a better design, Frechette said. The community grid plan would increase access to the South Side with the “creation of a new access point” at Martin Luther King East, according to the department’s website.

Some among those present came to advocate for a particular plan.

“Seventeen years ago, I was the first elected official to be interviewed at Adams and the viaduct. I said then, 17 years ago, ‘Tear this wall down,’” said Van Robinson, Common Council president. “And I’m gratified to see the large number of people out here tonight. I’ve said it time and time again. If you don’t speak up, if you don’t stand up, if you do not show your preference, then you are going to be left with the remains or the scraps. Another viaduct, maybe worse than this one, may be put up.”

A six-person panel moderated by Wright debated the two plans put forth by the Department of Transportation. The panel featured Jim Bright, president and owner of Dunk & Bright Furniture; Mark Nicotra, Town of Salina supervisor and representative of SAVE I-81; Peter Sarver, convener for Moving People Transportation Coalition; Bill Simmons, executive director for Syracuse Housing Authority; and Lemir Teron, assistant professor at the State University of New York’s College of Environmental Science and Forestry.

Bright and Nicotra favored plans to keep the highway in its current footprint, arguing that there would be economic consequences to changing the way the highway works. Every other panel member except Teron supported the community grid because it would remove the physical barrier that the highway viaduct represents.

Teron did not state a preference for either plan. 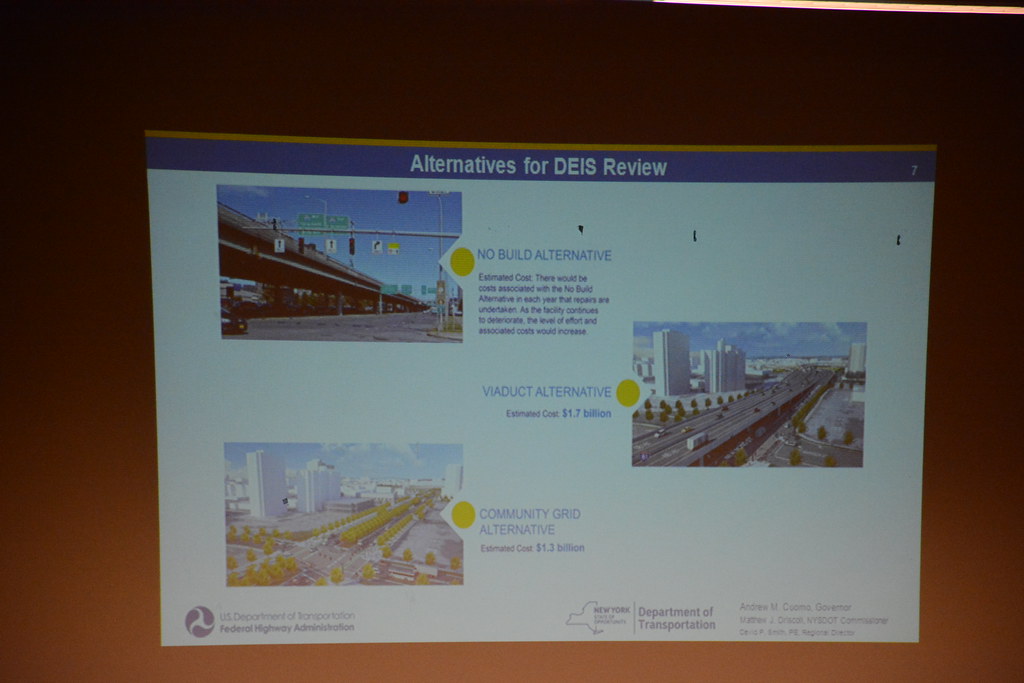 Residents took advantage of the question-and-answer periods built into the session to question Frechette and the panel members on various issues. The questions ranged from topics like how the department planned to improve public transport to an estimated date for the public to review steps of the process.

So far, officials have not announced an estimated date for a Draft Environmental Impact Statement. Once the statement is released, there will be 45 days of public review. The Federal Highway Administration and the Department of Transportation then will issue a record of decision, thus ending the National Environmental Policy Act process.