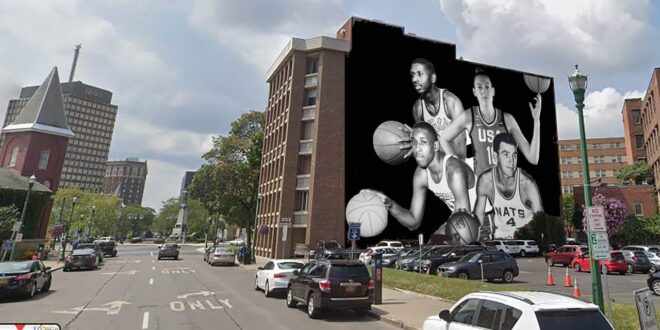 Frank Malfitano is seeing things. He sees the south east wall of a six-story building at 333 E. Onondaga St. in Syracuse as a huge mural, and he wants us to see it, too.

The mural, he says, will pay homage to four Syracuse residents who through their achievements in basketball “helped to put Syracuse on the map.” They are Earl Lloyd, Manny Breland, Breanna Stewart and Dolph Schayes.

Frank has manifested things before and brought them into being, so don’t discount this. He once saw Syracuse as a city deprived and deserving of the best free summertime-entertainment available, so he went to work and built one of the largest free jazz festivals in the Northeast. He saw the need for the talents of many of our local music artists to be recognized, so he created the SAMMYS (Syracuse Area Music Awards). He also saw that many of the stars that brighten the skies of our nightlife were ignited from a spark against the pavement right here in Syracuse, so he created the Syracuse Walk of Stars.

When Frank sees something inspirational, he runs with it. “I had seen some of the great murals in other cities,” he said. “I thought, we could use great art like that here.”

He selected Los Angeles based muralist Jonas Never to do the work because of his expertise in memorializing sports figures and pop culture icons.

“His work speaks for itself, and there’s no question that it’s great,” Frank said. “Never was rated by the BBC to be one of the top muralists worldwide.”

“Syracuse is a basketball town,” he began. “These athletes were pioneers in the sport. Manny Breland was the first Black scholarship player on the men’s  basketball team at SU and Earl Lloyd the first African American in the NBA. Dolph Schayes, a Jewish athlete, is rated as one of the top 50 basketball players of all time; and at 26 years of age, a white woman, Breanna Stewart, holds multiple championships at the collegiate and professional levels and an Olympic gold medal. She is also an outspoken advocate for social justice.”

Frank sees the project as a way of bringing people together around art to help bridge the social divide that is currently happening in our country and in our city.

“It bridges the boundaries of race, gender and generation,” he said. “It reflects our make-up as a community.”

So, when is this all going down?

“The work is planned to begin sometime in July or August, when the weather permits. There’s still a lot of coordination and planning involved — permits, travel, lodging, lifts, materials supplies —  and then there is the issue of paying for it all,” he said.

So far, there are some major sponsors on board including Price Chopper and National Grid, but he still needs to raise about $75,000 to complete the project.

If more money can be raised, he plans to do even more murals. To contribute, email info@syracusejazzfest.com.

Reggie Seigler is a South Side resident and regularly writes the
“A Friendly Five” music column. If you have story suggestion, contact
Reggie at reggie@softspokenband.com or (315) 479-9620