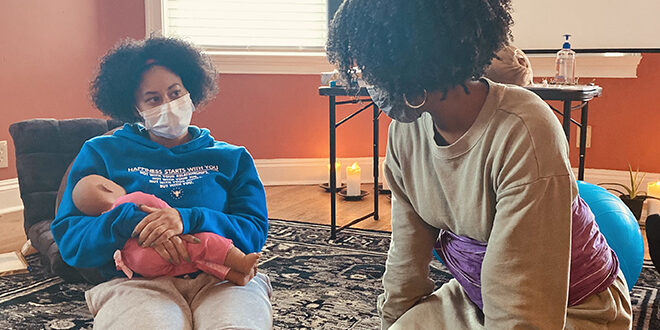 When she was 14 years old, SeQuoia Kemp was diagnosed with ovarian cysts and was told she would undergo surgery that week. She became hyper-aware of her reproductive organs and the constant pain. In preparation for her surgery, she refrained from eating and drinking. The repeated cancellations and rescheduling of her surgery took a toll on Kemp, who was starving.

By the age of 16, Kemp had lost one of her ovaries due to delayed care.

For three months, she walked around with a 10-centimeter cyst. Her mother pleaded with doctors to expedite the surgery and ease her pain.

“My mom did not really know what to do and just felt like the doctors were not listening to her,” Kemp said.

Kemp was experiencing medical racism and medical neglect, a fact she didn’t realize until years later. This was 12 years ago; however, Kemp explained that the same issues are still present. Providers are not listening enough, not advocating, being neglectful or being downright racist.

Black women have pregnancy-related mortality rates over three times higher than the rate for white women, according to the Kaiser Family Foundation. The disparities increase with age and persist across education levels.

With 30% of Syracuse’s population being Black, this issue is prevalent in the downtown and South Side communities where economic apartheid still prevails.

Kemp’s own experience of medical neglect and racism as a teenager inspired her to become a doula, found Doula 4 a Queen, and eventually co-founded the center. Doulas provide emotional support, childbirth and advocacy education, physical support during birth, and postpartum care such as breastfeeding or mental health guidance.

Kemp has witnessed the drastic disparities between the treatment of Black moms and white moms for the past eight years.

“My Black clients are seen as just combative or difficult,” Kemp said. “Whereas my white client was viewed as somebody who just knew her body.”

During the Sankofa Community Give Back, the center provided 85 families with diapers, wipes, car seats, clothes, breast pumps, feminine hygiene products and fresh food, according to the 2021 annual report.

But the team does more than just support mothers and families.

“We not only care for our community, but we also care for each other,” said Kemp, speaking of her connection with the other Sankofa doulas like Leeandra Torrance and Taylor John.

Torrance, a Sankofa community-based doula and mother, admitted that she goes to Kemp for everything and sees her as a mentor.

“I’ll ask her how should I say this email or what do I do with this meeting because she has been doing this for years,” Torrance said. “She knows it like the back of her hand.”

Torrance also revealed that she wished she had a doula when she was pregnant.

“Being a first-time mom, you don’t know a lot,” she said. “I didn’t have a bad pregnancy, but to have that extra support and to get the information about my rights makes me wish I had one.”

When one doula assists with a difficult birth and needs time to rest and recuperate, one of the other doulas steps in to meet with the client.

John, a Sankofa community-based doula and a senior at Syracuse University, explained how important it is for the client always to feel supported.

“We have backup doulas for a reason,” she said. “You never want to leave your client by themself or feeling alone.”

Torrance has been a backup doula for John. If John were not available, she would step in, which required Torrance to have already built a relationship with the client. The emphasis is on ensuring the client is comfortable.

This means delving into their home life which can be eye-opening and sometimes alarming. One of John’s clients was experiencing domestic violence, which provoked John, as she is a survivor of intimate partner abuse.

“I not only took on my client’s emotions, but it also triggered my own healing,” she said.

John felt like she wasn’t doing her job — she was talking to her but was that enough? She reached out to other doulas for advice.

“It really took my mentor to be like: what you are doing here — providing a space for your client to talk, to share, to tell her truth — is enough,” she said.

John had never thought of it like that. She realized that it is not always about teaching, but it’s also about discussing real issues going on in the client’s day-to-day life.

In Syracuse, community care requires patience. It is about holding space for mothers to vent and connect and providing emotional support for those experiencing financial or safety barriers.

“Many people want doula care but can’t afford it, so you have to be patient with yourself and your service,” John said. “Community doula care is not about getting a check.”

Sankofa employed three local interns last summer, including Hawa Farah. Farah, originally from Somalia, has lived in Syracuse for 15 years. She confessed that as someone who grew up here, she wanted to become a doctor and move away.

But Kemp changed that. She opened her mind to coming back to the community.

“SeQuoia always told us that whatever we do, to try to bring it back to the community, to home,” Farah said. “Syracuse brought you up, so why not come back and help it.”

Lizzy Reardon is a student journalist at Syracuse University