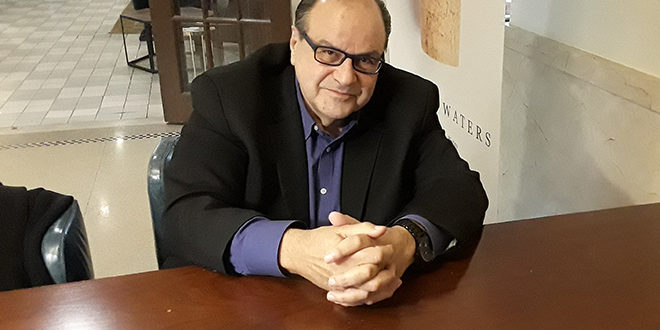 For the past 35 summers except for maybe a few, the folks around Syracuse have been treated to a weekend of free top-quality entertainment. We’ve grown to anticipate it every year and await it like students waiting for the last day of school. It marks the season and indicates to us that the music gods have gotten the word: “The snow is gone in Syracuse.”

After our usually long and grueling winters and sometimes nerve-racking seasons of watching Syracuse University’s basketball team, the public is always ready for it. The event pokes through the dreariness of “nothing to do” like a ray of sunshine through a broken blind. Thousands of spectators flock to soak up the vibe and listen to the music.

It has presented us with many of the biggest stars in entertainment, such as vocalists Natalie Cole, Lou Rawls and Al Jarreau and vocal/instrumentalists like B.B. King and Ray Charles, aka Brother Ray. These artists are all deceased now, and their faces have been added to that ever-expanding portrait of artists we love and miss so much. But our community was fortunate that they performed for us and all our friends, right in our own front yard.

I think by now most of you know that I’ve been talking about the Syracuse Jazz Fest.

The event began humbly at Song Mountain back in 1983. Then, it featured a combination of a few regional and national artists: the Heath Brothers, Cabo Frio, Nancy Kelly and a very young Kevin Eubanks, who later went on to become the smiling leader of the Tonight Show Band from 1992-2010. From there it grew and changed locations a few times. It spent a little time at Long Branch Park and Clinton Square. Finally, in 2001, it moved to Onondaga Community College. It seemed to have found its home there, where it has remained since — except for one year when it had to move to Jamesville Beach because of campus construction. The Jazz Fest even survived a push from the county in 2017 to have it moved to the Lakeview Amphitheater. 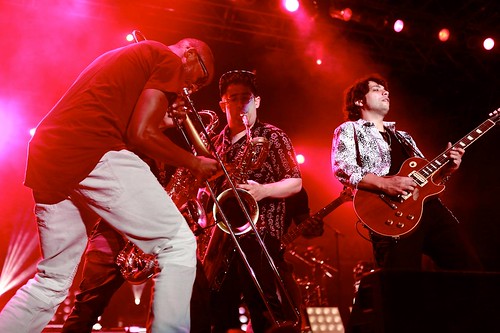 Trombone Shorty gettin’ down during a past Jazz Fest. | Photo Provided

The OCC location is roomy enough for the Jazz Fest to continue growing and has all the amenities needed to bring in some of music’s biggest stars. The event welcomed Smokey Robinson, Roberta Flack, Dionne Warwick, Chaka Khan and Nancy Wilson, and the list goes on and on. It even laid out the red carpet for the Queen of Soul, none other than Aretha Franklin.

Then came the news. We might not be having the Jazz Fest this year due to wonk-wonk-wonk and blah-blah-blah. In my head I was thinking, What? Wait a minute! We don’t want to hear that. As Bill Withers would say, “Dadgum-it.”

Weren’t we faithful through this long, cold and snowy winter to believe that the Jazz Fest would again be the highlight of our summer? Haven’t we stayed put waiting? I mean, we didn’t call the realtors when it was looking like one of our other favorite things to come together for, Syracuse’s basketball team, was playing like it would be ending its third season in the past five with fewer than 20 wins. And although one has absolutely nothing to do with the other, they both have a common secondary purpose. They act as our markers for the seasons. Basketball helps us get through the winter, and the Jazz Fest reminds us that summer does come in Syracuse.

Is there not going to be a Jazz Fest to look forward to?

We got to talk about this.

The founder of the festival and executive director, Frank Malfitano, posted a story from Spectrum News on his Facebook page. The headline said, “Future of Jazz Fest remains in question and needs corporate sponsor.” The Spectrum report focused upon the facts that the event’s major sponsor, M&T Bank, had “reached the end of their agreement after many successful years.” County Executive Joanie Mahoney mentioned that Onondaga County has poured a lot of money into helping the festival in previous years and said, “I think it all comes down to the private money that Frank has been able to raise in past years, and so far, this year I think he’s struggling, but maybe somebody will see this on the news and come through, and we’ll have Jazz Fest after all.”

I met with Frank after that. I knew that he wouldn’t go too deep into details. At 71, he’s been around, and his countenance is cool. Frank’s too slick of a player to show his hand, so I just asked, “What’s up?”

We talked about his childhood and his introduction to jazz. “I started out playing the clarinet in fourth grade and was introduced to jazz in high school,” he said. Frank had skipped a couple of grades in primary school, so he was a little younger than most students by the time he got to high school. “I made all city and county and went to SUNY Fredonia. I was 15 years old when I started college, man. I came home after my first year when my father passed. He died on the day of my final exam.” Frank went on to graduate from OCC and later from SU.

“Back in those days, I used to go to the 800 Club for lunch every day,” he said. “I liked to go where all the ‘Brothers’ hung out because I liked the music. OCC used to be at the old Midtown Plaza back then.”

One day, one of the bartenders asked him if he wanted to come back later that night to hear some real music. “When I walked in, they had a little table reserved for me with my name on it. It was handwritten on one of those homemade table tents. When I sat down, I was blown away.”

Playing that night was none other than John Coltrane, McCoy Tyner, Jimmy Garrison and Elvin Jones. “I’ve always felt that if I am going to do something I have to be able to be the best at it. I saw the best that night; I witnessed greatness,” he said. “I knew that I would never be able to play like that. So, I went home and wrapped my horn in plastic, dug a hole in the back yard and buried it.”

The man certainly has a feel for greatness and has had plenty of opportunity to present it. A visit to his website at syracusejazzfest.com will prove it. You’ll see the biggest names in jazz: Ramsey Lewis, Stanley Clarke, Wynton Marsalis, Dizzy Gillespie … it just keeps going. And these only represent who he’s presented at the Syracuse Jazz Fest. Beyond that, he’s lived and worked with big names all over the country. He has written for a jazz magazine in Washington, D.C., booked big names as an agent in New York City and has run the Detroit Jazz Fest, where he befriended Aretha Franklin.

“I believe each of the experiences I’ve had in life have helped to prepare me for my next endeavors,” he said.

We are all wondering what that next move will be. Since he didn’t talk about it in our conversation, I guess we’ll all have to wait. Whatever it is, though, he doesn’t have anything to prove.

He’s the man behind the creations of Syracuse Area Music Awards: The SAMMYS, the Syracuse Walk of Stars and OCC’s Arts Across Campus.

The following is a direct quote from his Facebook page. It’s probably our best source of knowing what’s on his mind at this time.

“Our primary goal is to make sure we can continue to present a high-quality festival in 2018, — and have it continue on for the next two decades and beyond for our children’s children, — and we want to make absolutely certain we can present the kind of Big Name talent at Syracuse Jazz Fest that the community and audiences have come to expect from us the last 35 years. Thanks for your patience.”

Have A Friendly Five suggestion?
Contact Reggie at
reggie@softspokenband.com or (315) 479-9620