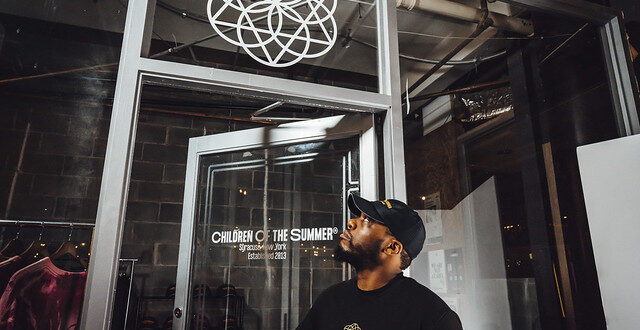 Seth Colton crouched on the ground as he fidgeted with a jammed VCR player. It was a few days after launching his business — Children of the Summer at a new location in the McCarthy Mercantile — and he couldn’t get the relic to work.

The vivid, blue TV screen illuminated a row of cased CDs, a pile of old “Barney & Friends” tapes, lines of freshly shelved hats and a collection of empty cardboard boxes. Colton had a vision for the shop, one that would establish a community who’re drawn to rare cassette tapes and locally made garments.

He started and founded Children of the Summer, a Syracuse-based lifestyle, management and retail agency, in 2013. His multi-platform business works with artists and creatives who are passionate about hip-hop and R&B music.

Unlike the other shops in the McCarthy basement, Children of the Summer is not a typical retail space. Local shoppers and out-of-town visitors may enter the shop and find themselves there for hours.

Like most conventional shopping experiences, some patrons sift through the racks of clothes and try on a hat. But what stands behind the glass-paned storefront isn’t about transactions or items  that can be carried out in a bag.

Fixed in the middle of the shop is a long black couch where visitors can sit in front of old box TVs.

When he pictured the flagship opening, Colton brought in the keepsake cassette tapes and a vintage SEGA console for customers and Children of the Summer regulars to bond over and pass time. Kids can drift into the shop and spend time playing video games or watch old videos while their parents browse other storefronts. As word spreads, its growing number of “fans” can congregate in the back corner of the McCarthy basement and chat while listening to music playing off Colton’s laptop. Some will walk out with a receipt. Yet, most will leave with an industry contact and a lasting memory of engaging with a local creator.

Children of the Summer consists of local musicians, such as Leekindacut and Colton himself, commonly known as Seth Dollar. The team also includes a handful of graphic designers, video directors, producers and web managers.

The team operated out of a downtown office space on James Street before moving into the mercantile space at 217 S. Salina St.

At the previous office, Children of the Summer created and sold merchandise, produced music and video content. To grow followers, the brand appeared at local venues and shared content through music streaming platforms. But Colton felt something was missing –– a center where the group could connect and meet with fans, advertise and display their work, and establish a communal space among other young digital creatives in Syracuse.

“I’m very protective of my brand,” Colton said. “If I’m to do something … it has to make sense.”

After bringing in and displaying more merchandise, moving around furniture and even getting the ancient VCR player to work, Colton soon saw the hub for Children of the Summer come together in a way he and the group envisioned.

Since its late summer launch, the store has sold out of much of its original merchandise and has had to replenish its stock of T-shirts and hats and create new retail items.

Every season, a new item will launch, Colton said. As fall brings colder temperatures, a new line of women’s wear is available and soon children and infant clothing will be on sale.

On Nov. 1, Children of the Summer will begin its partnership with CNY Works to employ at least six city youth between the ages of 16 to 24.

Colton himself was hired by iHeartRadio through the CNY Works program when he was 16. He worked roughly 20 hours a week in the marketing department and had his own show called “Step it Up,” he recalled.

“The overall goal for the CNY Works is that I want people to leave with something,” Colton said. “I know there’s other kids out there that probably want to do these things but have no idea that there’s outlets already in Syracuse.”

When Colton first visited the McCarthy Mercantile, he said he thought the place felt sustainable for Children of the Summer.

“We didn’t open this spot because we thought that there would be good traffic down there,” Colton began. “It was (because it’s) a great space to enable our fans to be.”

Michael John Heagerty, the owner and founder of the McCarthy Mercantile, said the space brought something new and unique to the underground shopping scene.

“We’re happy to have a new shop there that helps unlock another piece of the mercantile,” Heagerty said. “Our hope would be any day of the week, you walk down there and there’s something different happening, to the point where whenever you come back, it’s a new experience.”

Since the opening, Colton said he’s noticed that more long-time supporters are eager to buy Children of the Summer products than they were in the past.

“Buying the clothing is kind of like being a part of it for them,” said Trigg the Ruler, a longtime creator for Children of the Summer.

While sales and visits are consistent at the shop, Children of the Summer has undergone a lot of structural changes, whether that be shifting creators to different roles or bringing on new team members.

Trigg the Ruler has been a member of Colton’s team since 2013. He’s contributed his own music, produced music videos and content and now helps at the shop and is learning more about digital marketing.

Last July, he created and filmed a music video for local Syracuse rapper Scorey. The song and video “Guardian Angel” has already surpassed one million views on YouTube in its first two months of being posted.

Since Children of the Summer was founded, the local group has seen more than one million new impressions on its social media pages, whether that be views, likes or mentions of the company and the individual artists it works with.

Olivia DePietto is a sophomore at Syracuse University’s Bandier Program –– a curriculum for students who are interested in the media, marketing and business of the music industry. When she first started the program, DePietto was searching for new ways to be involved with Syracuse’s local music scene. She found herself following and interested in Children of the Summer and the artists it represented, specifically LeekIndaCut and Colton himself.

While Children of the Summer has already created and produced new content for LeekIndaCut, a bigger project of his will be released later this year.

On Oct. 8, Children of the Summer will host a private performance by LeekIndaCut near Syracuse University’s campus.

In just over a year of working with Children of the Summer, LeekIndaCut has seen more than 34,000 plays of his music on Apple Music and has gained listeners not only locally but in New York City, Buffalo and Columbus.

“Growth wise, they have just opened up more for me that I didn’t know,” Leek said. “Before it was just me, Seth and Trigg … and now there’s a lot more people behind them that want to work with me, too.”

Whether it comes to restocking the shelves in the shop, producing new video and artistic content and adding more people to its team, Children of the Summer works to involve the Syracuse community and create a spot where others, too, have an artistic outlet.

“Children of the Summer is not a label. It’s really not a corporate entity,” Colton said. “It’s a family-run brand … it has its own base.”