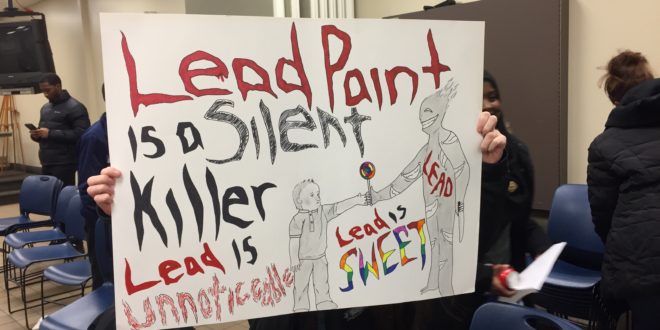 Sign made by student Tien Phao who also wants to create pamphlets in multiple languages to warn all Syracuse residents about the dangers of lead poisoning. | File Photo

In a city where 91 percent of homes were built before lead-based paint was outlawed, community members have come together to combat a crisis that local and state government has yet to resolve.

These laws would require and enforce proper lead testing for rental dwellings, and keep landlords accountable to their tenants. Driscoll compared the home rental business to owning and operating a restaurant. If health inspectors found open pots of hot mercury in a restaurant kitchen, there would be consequences, he said. The presence of lead should be met with the same urgency.

“At the end of the day, you can’t poison people in their homes and use it as a business model,” he said. 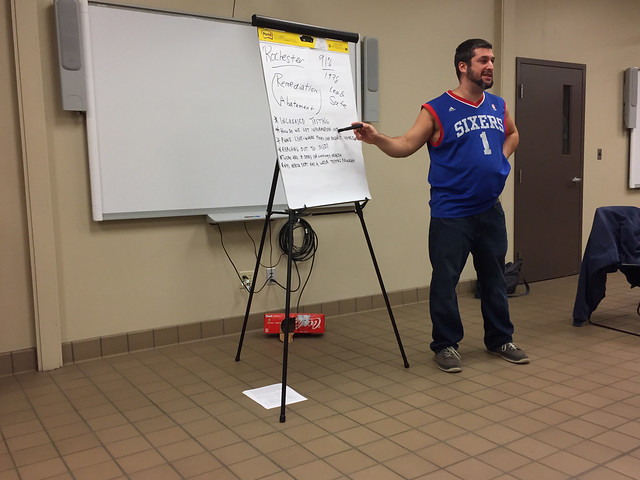 The current system of testing for and reporting lead violations is too slow, Driscoll said. Currently, it can take the courts a year to process a lead violation, but Driscoll said in that year, the damage is already done to babies and children during important developmental stages.

But one key decision could lead to more effective services. On Dec. 18, the Common Council passed legislation allowing for the creation of a Municipal Violations Bureau, said Stephanie Pasquale, commissioner of Syracuse’s Department of Neighborhood Business and Development. The bureau can expedite the consequences for landlords by ticketing them directly for lead violations. This is important for the issue of lead poisoning, which puts babies and children at the highest risk, Driscoll said. 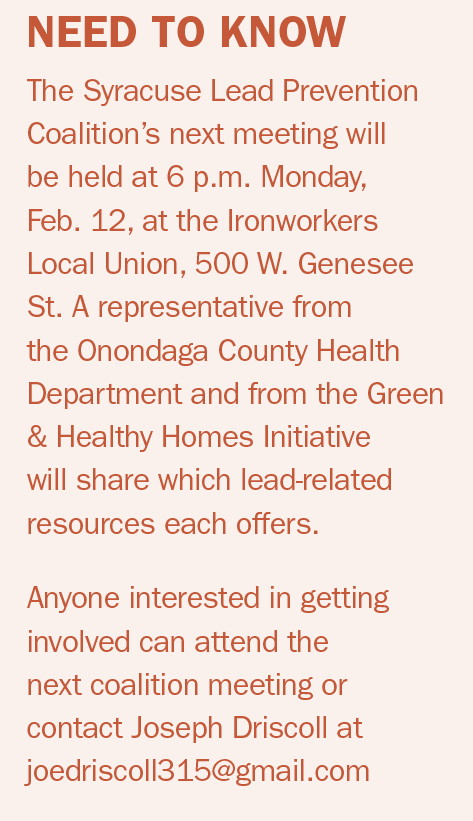 Yet the Municipal Violations Bureau alone cannot mitigate the city’s lead-poisoning problem. Tickets will make a difference only if city inspectors have the right to conduct interior inspections, the Syracuse Lead Prevention Coalition determined. First and foremost, the coalition plans to advocate for a rental registry that would allow for interior inspections of rental properties, including one- and two-family dwellings. The coalition also wants lead-specific legislation, which would mandate lead inspections and remediation for homes where lead is present.

The coalition hopes that the Municipal Violations Bureau will be able to provide services to properties owned by delinquent landlords not paying violation tickets, Driscoll said. Then, unpaid fines can legally be added to their tax roll.

Legislation regarding a rental registry was previously written and denied by the Common Council. Driscoll, now a councilman, plans to bring forward the proposal once again.

In the meantime, the coalition will focus on education and advocacy. For example, the coalition plans to create a lead crisis hotline that anyone could call to learn about local services addressing lead.

“We’re assessing what services are already out there, and who’s working on this problem,” Driscoll said. “We’re trying to get them all to work more cohesively.”

Katie Bronson, with the Green & Healthy Homes Initiative, attended the meeting and shared that the national nonprofit has conducted research regarding lead in Syracuse, and is currently developing an anti-lead action plan.

“The GHHI study projected that for every dollar invested in lead remediation or abatement, we get a return of anywhere between $17 to $200,” Driscoll said.

— Article and photos by Lindsey Sabado, The Stand Staff reporter