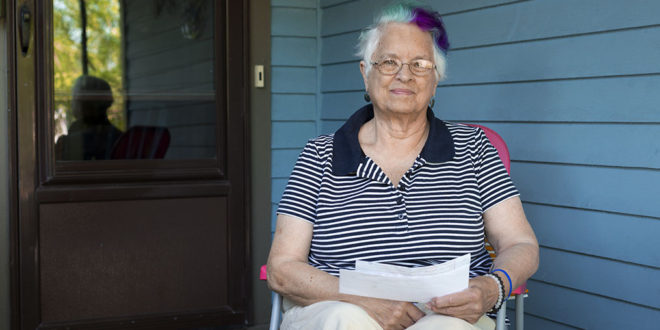 Carole Horan has written to 10 incarcerated men through the Death Row Support Project. She says it doesn’t matter what they did, what matters is who they are trying to become. | Zachary Krahmer, Staff Photographer

Carole Horan has been handwriting letters for 40 years. The era of email and texting hasn’t altered that practice.

She enjoys sharing little things, and so do the people she writes to, who respond with neatly penned replies that Horan keeps in a box under her bed.

For them, the extra time it takes is no issue: All of them are in prison, some on death row.

“A long time ago people wrote letters,” Horan said during a chat at a coffee shop. “I mean real letters, not email letters, to people because long-distance phone calls were really expensive.”

Horan shared some letters she has written and received over the years, including recent exchanges with a man on death row in Ohio and a local South Side man she reached out to after she saw his name in the news and remembered him from Seymour Elementary School.

Horan originally got involved in writing to prisoners through a program based out of Chicago that connected letter-writers with inmates sentenced to death.

She never asked them how they feel about getting her letters, but then she had a first-hand experience that provided an answer.

The first man she wrote to was Jeff Dicks of Tennessee. He was on death row for about 17 years before he died of a massive heart attack. In 1979, he was convicted of murdering an elderly store owner. Horan felt that Dicks, whom she described as a poor, white man from the South, had a hard time getting a fair trial. Horan added that his mother fought for his innocence, even writing six books about it.

“The first letter was so hard to write because you don’t know what to say or ask,” Horan said.

Horan said that Dicks, like many of the others, was surprised to hear from somebody, anybody. Over a few years, a friendship developed, and Horan eventually got a chance to meet him. While she was visiting, she stayed with his mother and got to experience what it is like to be in a maximum-security prison.

“To physically see (him) and being able to hug him,” Horan said. “It was pure joy.”

For the first 17 years she was only writing to Dicks, and after he died she stopped for a time, processing it all.

In the letters, Dicks had described to Horan his time in solitary confinement, when he was allowed to come out of his cell for only one hour a day. During that hour he had a choice to exercise or take a shower, but as time passed he was allowed to do more — even teach a class.

Horan said that Dicks’ handwriting was small because he was depressed. He would talk to her about how long his appeals process was taking, a divorce from his wife, not seeing his daughter and how he felt his public counsel was being ineffective.

Currently, Horan writes to three prisoners. One is on death row. 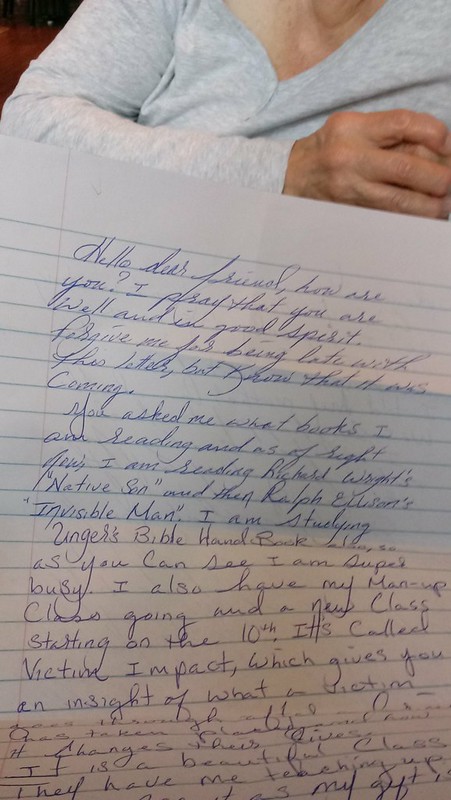 Horan said she writes the letters by hand using a fountain pen. For most letters she writes, she is usually paired with someone by the Death Row Support Project. But she reached out to Habakkuk Nickens because she remembered him as a student when she worked as a secretary at Seymour Elementary School.

Horan knew all the Nickens children, and said that she was inspired after reading an article in The Stand about efforts he is leading to prevent gang violence in the South Side community — efforts he oversees while behind bars. Nickens is serving 20 years for gang activity at the Federal Correctional Institution in Ray Brook, New York.

Horan said she got in contact with him through his mother initially via email. They have been writing back and forth for over a year now.

“It’s just a beautiful thing,” she said. “(It is a) very loving friendship, and he is doing beautiful work trying to turn his life around.”

Horan said she has a visit with Nickens scheduled later this month, but her trip could be canceled if the prison is on lockdown, which he tells her has been happening a lot recently.

In total, she has written to 10 incarcerated men; she has never been paired with a woman. She also writes to a man named “Jonathan” at the Louisiana State Penitentiary at Angola, who is not on death row, and she writes to a 72-year-old man named “Von” in Ohio who has been on death row for 35 years.

“You are sharing your life with them,” Horan said. “It’s a lovely thing.”

She does not ask any questions about what they did, sticking instead to how they spend their time and their prison jobs.

She shares stories about her grandchildren, travel and books, and what she or they like to read. She said “Von” likes to crochet, sharing he was having a hard time completing the feet of a penguin. “Jonathan” makes her laugh, often describing how he doesn’t like working in the fields in Louisiana, where inmates farm crops such as cotton and corn.

“I am not fearful about writing,” Horan said. “I am cautious in the sense that there are things I don’t tell them about me.”

Because letter writing is out of fashion now, she gets excited to go the mailbox and find a letter. She’ll rip it open, sit down and read it right away.

Word has spread about Horan’s efforts. She was writing to a man named “Richard,” and he kept telling others. He gave her name to two prisoners, and they wrote to her. One was “Jonathan,” and the other was looking for her to give him money. Horan said she does not give money, preferring friendship.

She’s been writing to “Jonathan” for at least 10 years. He makes her laugh, saying things like, “Girl, you need to take some time to rest.” 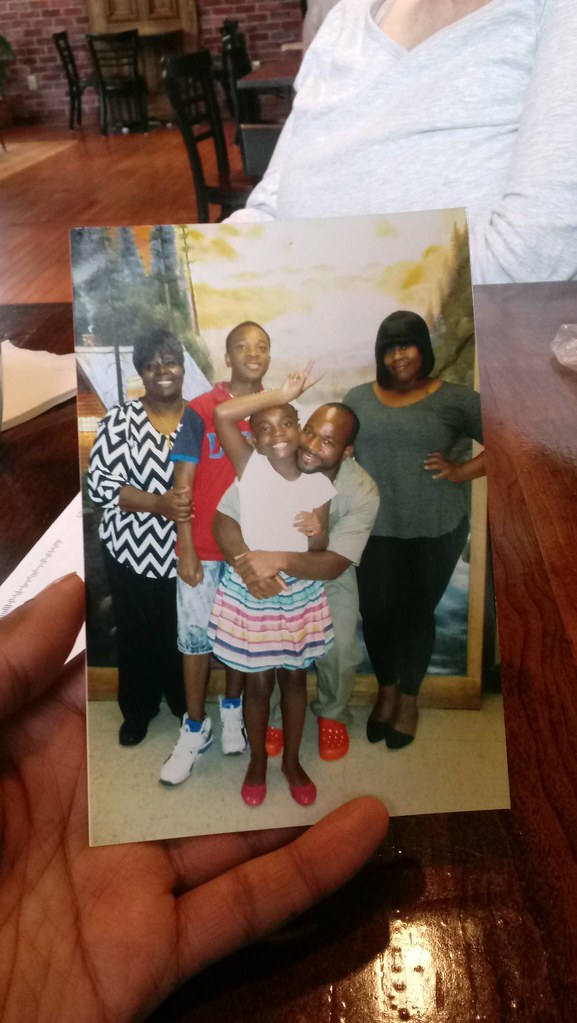 Horan shares an image of her pen pal Nickens with his family he sent her. | Bianca Moorman, Staff Photographer

Nickens remembers her from school but didn’t recall what she looks like. She sent him a picture with her daughters who Nickens called Miss Americas and his pen pal Miss Universe.

Horan said Nickens asked her how he can improve his vocabulary, and she said through reading. Nickens told her that he has been reading “Native Son” by Richard Wright and “Invisible Man” by Ralph Ellison. He shared that he is not a monster; he is a changed man. He’s created a program while in prison called M.E.N., Men Educating Neighborhoods.

“What he is working on now is to help men realize that violence is not the answer,” Horan said.

When she first wrote to Dicks, her original prison pen pal, it took her anywhere from a day to weeks to complete a letter. Now she says it takes her about an hour, or up to three days.

She keeps pictures of all the prisoners she writes — her “friends,” as she calls them — on her refrigerator. She also keeps a box under her bed of letters she has received. Just recently, she went through the box and saw the last letter that she received from “Jeff.” She reads them for inspiration.

“One of the beautiful things about writing and receiving is that you can read it again and again,” Horan said. “And sometimes in writing, you can say things on paper that are a little hard to say in person.”

She finds having something handwritten is a lasting quality.

She has learned that a lot of people who are on death row are rejected by members of their family. She fills a critical void, one that prisoners have alluded to.

In a recent letter that she received from “Jonathan,” he wrote: “(You’ve) got this Pope Francis, Mother Theresa thing going on haven’t you?”

Horan does not believe that this letter-writing will lose its appeal and said she’ll keep at it for a long time.

“To me it is not important what they did,” she stressed. “It is important in who they are trying to become.”