In April, the Beauchamp Branch Library, at 2111 S. Salina St., will host a series of “First Movement of the Heart: Poetry and Interpretive Dance Classes for Teens.” Jackie Warren-Moore, a local poet, and Cheryl Williams Mitchell, a dance instructor, will teach five afternoon sessions in which adolescents between the ages of 13 and 18 will learn to write poetry and then interpret their poetry as movement.

The workshops will culminate with a performance at the library April 23. Poets and Writers Inc., a national nonprofit literary organization, funds the workshops.

This program is possible due to a grant from the organization, but special events are becoming more difficult to plan, said Paschal Ugoji, a Beauchamp librarian. 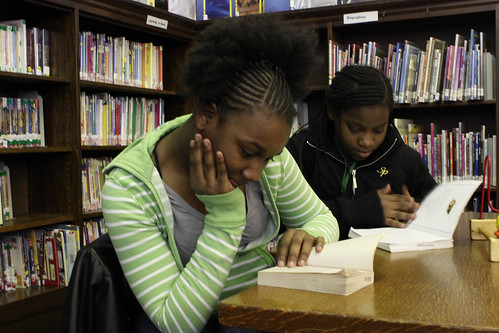 “The constraint we have is funding,” Ugoji said. The library often receives offers for events, he said, but they do not happen because the library cannot afford them.

Public libraries suffer from federal, state and local underfunding. In February, President Barack Obama’s budget proposal called for a $20.3 million decrease in funding for the Institute of Museum and Library Services, the main source of federal aid for the nation’s museums and libraries. In January, New York Gov. Andrew Cuomo proposed a 10 percent cut for library aid in the Education Department’s annual budget.

“In dollars, the amount has gone up every year,” she said. “However you’ll hear almost everyone say libraries have been cut because the same amount of money supports fewer people and fewer materials.”

Reduced funding requires libraries to strip some services. In December, the Onondaga County Public Library announced its branches would not stay open past 7:30 p.m. Dailey said the change resulted from a decrease in staff and a decision to keep more employees at the libraries during the most popular visiting hours.

Library users are so varied and their needs so different that it is difficult to determine what services to drop. 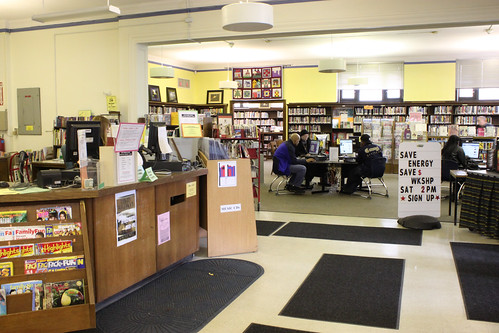 The inside of Beauchamp Branch Library.

The American Library Association says libraries are “the one place in America where the doors are open to everyone.” The libraries provide services to everyone, from college students studying for exams to grandparents emailing relatives living abroad. Computers and access to the Internet are vital for many library patrons. And that is becoming even more important during a recession.

Dailey explained the importance of having access to information about job opportunities online. “I don’t know if people realize this, but every major employer in Onondaga County requires a job application online.”

Computer use is on the rise, but the age-old practice of lending books and now DVDs is still a fundamental role of public libraries. So is providing a place to meet and a place for children to learn.

In the rear of Beauchamp, a flight of stairs leads to an auditorium that is often used for community meetings.

“The branches really are neighborhood centers,” Dailey said. “They are places where community members get together.”

“Many of my students, up to 40 percent on a yearly basis, don’t have the means to buy books to read, let alone a computer and the Internet. Without a public library system, students would lack the resources necessary to complete some assignments expected to be completed,” Rogers said.

Tatjyjana Verhage, a third-grader who played the quiz game, said she enjoyed “Daily Double” and learning about people like Martin Luther King Jr. and Rosa Parks.

“Some people don’t think their elected officials want to talk to them, but they do,” Dailey said. She said citizens should tell their local politicians, such as Assemblyman Samuel D. Roberts or County Legislator Monica Williams, what they need from their local public libraries.

“I would focus on what is needed, whatever your personal needs are, and ask for support.”