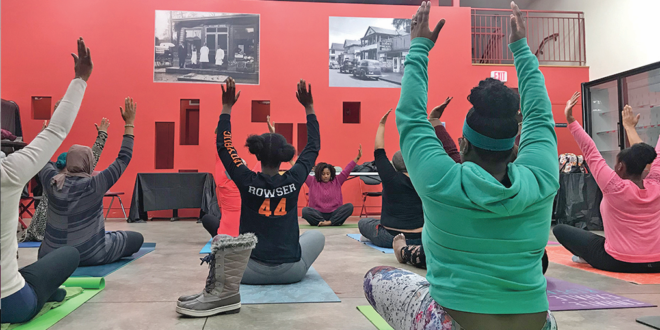 Indaria Jones says that the full weight of her pregnancy hadn’t even begun to set in when she and her baby almost lost their lives.

When the Syracuse native went into labor just 6-1/2 months into her pregnancy, she had only given her employer notice two days earlier. And while the old adage claims that ignorance is bliss, Jones says that she wishes she’d known a lot more before her pregnancy experience.

“I had a very traumatic experience and I never really told anyone my story because I don’t want to scare other moms or pregnant people,” Jones said of the birth of her daughter, now four years old. “But I guess it’s good to inform them of what to do and what can happen.”

At the time, Jones didn’t realize that her odds of having pregnancy-related complications was 243 percent more than her white counterparts, according to the Centers for Disease Control. The 2018 CDC report noted that in comparison with white women, minority women are three to four times more likely to die in the United States from child birth.

Last April, Gov. Andrew Cuomo announced that to combat these high maternal death rates, he would create an initiative to lower the mortality rates, particularly across racial divides. Women like Jones now depend on advocates like Sequoia Kemp, founder of Doula 4 A Queen, who seek to educate expecting mothers. To do so, Kemp regularly hosts events and informational sessions geared toward the mental and physical wellness of black pregnant women.

Jones said that the months leading up to her delivery were increasingly painful. She recalls having difficulty walking around her workplace for more than four minutes, and when she tried to go shopping at Destiny Mall, she wasn’t able to walk from the car to the guest services kiosk without doubling over.

“Your first time, you don’t really know. You’re just trusting the doctors,” Jones said. “I went to my usual checkups, and I would tell my OB that I could barely walk. She said ‘You know, you’re getting further and further along and your baby is coming down and that’s just all that is.’”

Four days after her doctor visit, while lying in bed, her water broke. “It just ruptured completely,” Jones said.

Panicked, she made her way to Crouse Hospital to deliver her baby girl. There she encountered a slew of problems. She needed a C-section, an operation that she dreaded. Jones said that she specifically went to Crouse because of rumors that other facilities perform high numbers of C-sections. During the six-hour surgery, her baby’s right arm was broken, while Jones says she lay on the table writhing in pain, asking all the while about her newborn and receiving no answers.

“The whole time no one answered my questions. I kept hearing them say code blue. They were calling for help, and I heard a whole team of doctors come in,” Jones said. “I kept thinking that I was going crazy and wondered where the heck my baby was.”

Her fear only increased.

“It just got to the point when I felt like I was gonna pass out, but I was scared … if I pass out, I don’t know if I’m gonna wake up,” Jones said. “I just kept asking my mom to take care of my daughter; I just can’t hold on to this pain anymore. If I don’t wake up, just take care of her.”

Public officials like Cuomo have since acknowledged a problem lies with healthcare that directly affects black women like Jones. But proposed changes have been slow to take effect. Jeffrey Hammond, spokesman at the New York State Health Department, said that one reason for the delay is the lengthy training time required to prepare more midwives.

Kemp, a certified doula who has a bachelor’s in public health, was pleased to hear of the proposed changes, but said she could not sit passively by and wait for them to be implemented.

Her focus is on seeing a mother have a positive pregnancy — not only throughout the medical experience but also how a mother’s social aspects are affecting their pregnancy. After supporting a mother to delivery, she moves her focus on the wellbeing of the infant.

Kemp teaches women about their rights, and says that she encourages them to ask questions of their healthcare professionals. When her clients are overwhelmed by the pregnancy, she acts as a sounding board, stressing the difference between a midwife and doula.

She noted that while she does not perform medical exams like vaginal checks, she makes it a point to offer emotional and informational support. She also explained that doulas are especially helpful during labor with techniques that aid in pain management.

In addition to working one-on-one with pregnant mothers in preparation for delivery, Kemp, through Doula 4 A Queen, organizes events throughout the year which are open to the community. Often, Kemp partners with other local organizations for workshops.

At one such event, Syracuse University professor and yoga enthusiast Marcelle Haddix of The Zen G yoga group taught expectant mothers how to practice yoga without causing harm to their babies.

“A lot of people tell pregnant women to pick up yoga, but you have to be careful not to hurt the baby,” Haddix said. “That’s why we help you learn poses or modify your favorite ones.”

Kemp said that it was important for her to enlist Haddix’s help because she recognizes that mental health is a topic that isn’t usually openly discussed in the black community. She believes that by having events that encourage discussion and feature instructor-led activities like yoga, women will have a safe space where they can be honest about the problems they face.

“I try to have events that cover a spectrum of issues so that even if you’re not pregnant or thinking about having kids tomorrow, you still will have that information for when you do decide to have children,” Kemp said.

Given her past experience, Jones is unsure whether she’d try to have another child but is grateful for people like Kemp.

“I know if I was to have another child, there’s a lot of things that I would do different,” she said. “And I’d definitely get a doula and learn how to advocate for myself.”