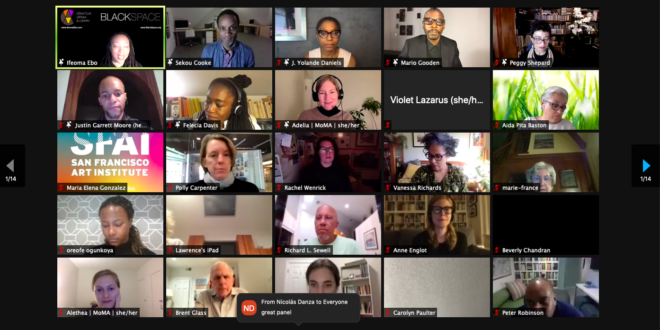 Amid the conversation about the impending reconstruction of the Interstate 81 viaduct  it is clear to Syracuse residents that the built environment can have dramatic effects on one’s living conditions.

The panel was set up as a conversation about Black Americans and architecture, focused mainly on preserving the rich history of many overlooked Black neighborhoods and bettering the environment for communities today. Many of the tensions, decisions and concerns discussed directly related to Syracuse’s South Side.

The MoMA collaborated with Blackspace Urbanist Collective for the virtual event, and used the group’s manifesto as a guide throughout the presentation. Panelists were asked to make decisions between creative tensions often found in ethical architecture, and attendees were encouraged to participate through their own poll as well as make comments in the chat.

The active participation from attendees mirrored the collaborative attitude of the architects that spoke about community engagement and collaboration.

“Architects have been so reticent to relinquish power,” Cooke said. “We have to get over that and trust that people really know how to build their communities, and they’re not as uneducated or incapable as our profession would have us believe.”

Cooke’s contribution to the exhibit, “We Outchea,” focuses on the 15th Ward and how the construction of I-81 destroyed a thriving Black community. Specifically, Cooke looks at  Pioneer Homes during the 1940s.

Although the discussion was not directly about Syraucse and its unique and salient architectural challenges, panelists discussed topics that directly relate to the city, specifically the East Adams Neighborhood where the former 15th Ward once stood.

During a discussion regarding preserving culture versus structure, the idea of preserving buildings that represent an intersection of both — like churches —was brought up. Currently, the original AME Zion Church on East Fayette Street stands abandoned with plans for refurbishment.

“In the U.S., structures or buildings built by and for African Americans are not seen as having value. They are seen as vernacular, not capital A architecture,” Gooden said.

A lot of architecture that is deemed worth preserving continues to contribute to the dominant, eurocentric narrative, Gooden said. Cooke noted  the current trend to strip architecture of personality and history; once void of personality or uniqueness, the structure inevitably becomes adopted into the dominated culture, he said.

“Our systems are made up to value some things and not others, and therefore we maintain things in different ways,” said Moore, the program officer for the Humanities in Place program. Moore highlighted how income inequality, segregation and lack of access bleeds into every aspect of American history, even into churches.