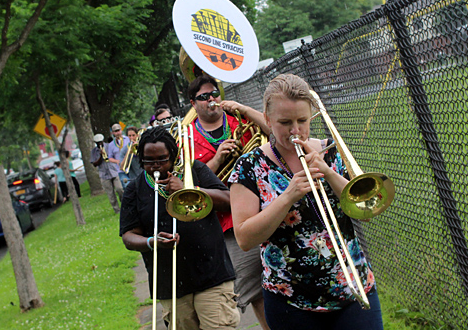 |Photo by Syracuse In Focus

Summer music series to continue at Skiddy Park despite violence 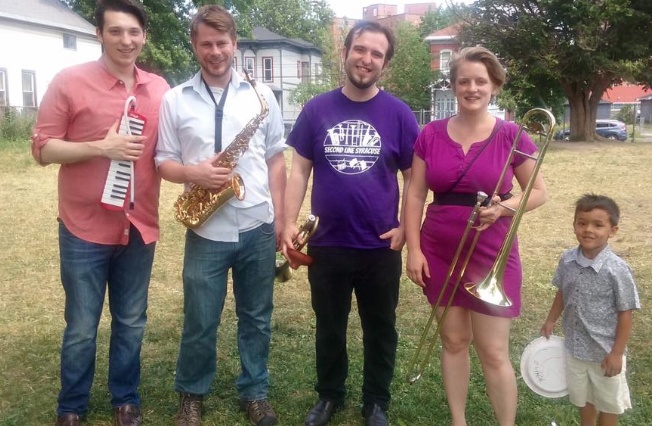 Local musician Melissa Gardiner, who lives within walking distance of Skiddy Park, held her annual neighborhood parade Sunday afternoon with her New Orleans’ style brass band Second Line Syracuse in an effort to do something positive for the community.

“We were welcomed by our neighbors,” she said. Residents came out of their houses and danced, slowed their cars, took photos and even asked when they will do it again. “We got such a positive reaction.”

Before starting the parade at 1 p.m., she revised the parade route, which usually marches in an expanded course around the park’s perimeter, because police presence nearly emptied the park except for a few young kids who remained on the playground.

“The police killed the buzz at the park, so no one was out,” she said. “The band decided to march to another celebration scheduled at Jubilee Park on the Southwest Side of the city.”

Two police cars sat at the corner of Tioga and Otisco streets just after noon that day. An officer told Gardiner the annual Father’s Day cookout was being restricted at the park this year because of threats of gun violence. Police Chief Frank Fowler even made a brief appearance around 1 p.m. to chat with the officers.

Ten hours after Gardiner’s march, gunfire at nearby Stone Court, resulted in the death of Gary Porter, 41, who went by the name Terry Maddox.

Gardiner was devastated by the news but emphasized: “We can’t allow this incident to set us back from where we are as a community. We have to look forward.”

SLS’s parade was the kickoff for a new summer-long music series, which Gardiner has no intentions of stopping.

“I plan to uplift my community the best way I know how,” she said … “through music.”

The first Latin Drum Circle was held from 12:30 to 2:30 p.m. Sunday, June 26, at Skiddy Park, and the sessions will continue every Sunday through August. All musicians and community residents are welcome.

Last year, Gardiner was awarded a grant by Salt City Dishes for the neighborhood parade and funding support from the Near Westside Initiative. During the 2015 event, SLS performed down the sidewalks, passed out percussion instruments and beads and was joined by West Side residents. The band also performed at the Near Westside Multicultural Block Party held last August at Skiddy Park.

For a list of community support resources, visit here