Each year, the Great New York State Fair blooms in Syracuse for 12 days. With it comes the Pan-African Village — a make-shift village constructed of plywood and tents. The village draws upon fair-goers to provide an economic boost to entrepreneurs that sell food, art, clothing, jewelry and more, all with a Pan-African influence. 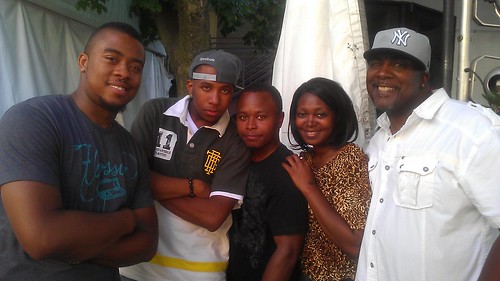 The Talented Ones, from left, Deyquan Bowens, John Bowens and Ekwan Brooks take a break between sets on the Pan-African Village Stage. They are shown with Anjela Lynn and Michael Houston. | Ruthie Angrand, Staff Photo

As a part of its daily draw, the PAV treats fair-goers to a variety of entertainment on its PAV Stage. Performing this year were a diverse line-up of storytellers, drum and dance troupes, singer/songwriters, magicians and bands.

Many of the performances were authentic and cultural. One example is Songembele, a group of drummers, singers and dancers from Rwanda. During a break in their performance, they shared information from their culture, such as what their drums were made of, along with the names and importance of the drums.

Other diverse groups participated, too. The Gun- runners, a Native American Rock & Roll band, and Colleen Kattau and Some Guys, a folk Latin flavored group, also performed. Kattau’s group is based in Cortland County and advocates for Latin American causes through its music.

Rounding out the lengthy list of performers were many staple local and regional Blues, R&B and Jazz bands. Two of Syracuse’s latest R&B bands, the Starlight Band and Soul Mine brought the house down with their high-energy performances. The ESP jazz band, featuring guitarist John Magnante and percussionist Jon Heard, also were phenomenal.

Again, as in some past years, my sound company, Bishop Marguerite Sound Co., won the public bid to provide a sound system and sound-tech. It enabled me a first-hand view of all the entertainers. However, it also opened the door for the perception that my commentary could be skewed; so I sought out assistance from The Stand’s community correspondent Ruthnie “Rae” Angrand to fill in for this month’s A Friendly Five column.

Rae, as she likes to be called, is also a poet. She, herself, had the opportunity to perform on the PAV Stage with the C-Jack Run Revue. My only request of her was that she would write about what moved her with the other performers.

C-JACK RUN REVUE :: This showcase is a six-year running feature at the PAV

D.LYTE ::  Rapper with a dual associate degree in radio and audio production now performing and studying radio and broadcast

MICHAEL AND ANJELA LYNN ::  duo performing together for more than 15 years with strong onstage chemistry

ONE NATION ::  An all-male group that can turn anything funky

SOUL MINE ::  High energy dance, funk and R&B band that has fun on stage