Many gather to debate the creation and design of Sankofa Park

Proponents of a “pocket park” on the South Side continue to hear concerns that it could generate more worry than benefit, especially if trouble-makers congregate at the site next to a library that draws children and teens.

“Our children 99 percent of the time walk to the library alone. They are not supervised,” said resident Geneva Hayden, speaking at the TNT meeting that was held at the South Side Communication Center Wednesday night. She said parks are a hangout for trouble-makers and a hotspot for gang-related activity. 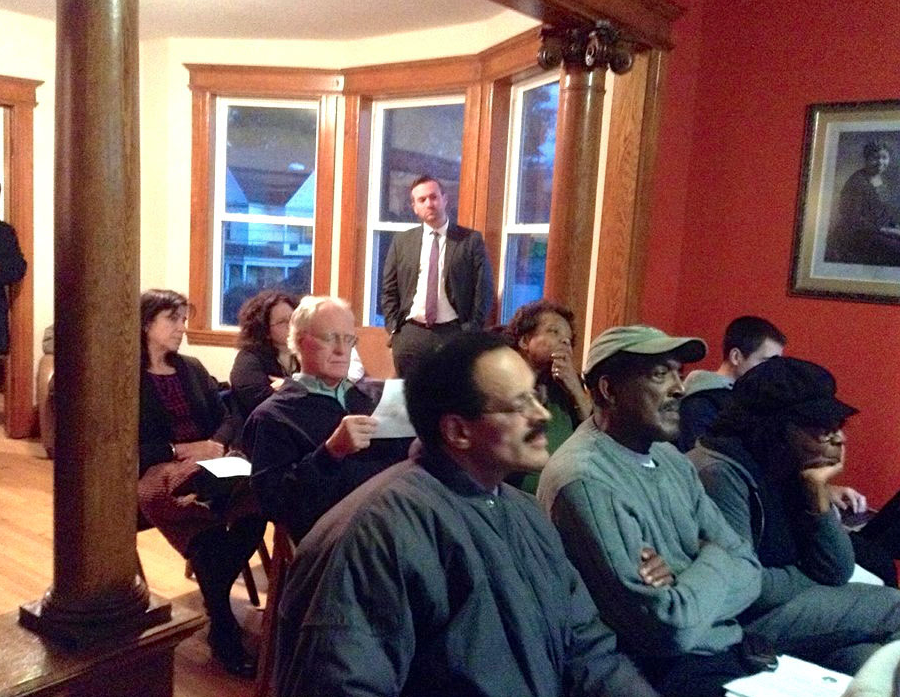 “So the biggest issue is the protection of our children,” Hayden said. “And this park, I’m going to be honest with you, will cause problems. It will cause problems because if we don’t make the community aware of the needs for the park people will use the park for the bathroom, they will use it for garbage, there will be violence and it won’t be a safe place for our children from the library.”

Hayden was among a group of about 30 people gathered on the second floor of the center, including members of the South Side community, 4th District Common Councilor Khalid Bey, and Baye Muhammad, commissioner of the City of Syracuse Office of Parks and Recreation.

The so-called “pocket park,” to be called “Sankofa Park,” would be on the corner of South Salina Street and East Colvin Street.

The meeting began with Bey and Muhammad giving a pitch supporting the idea and explaining how the park would be designed and paid for.

“Sen. (Dave) Valesky’s office was the source of this money. It has been sitting there since 2009, slated for an area that received zero attention for the past 30 years,” Bey said. “The type of attention people have been calling for, for such a long time.”

Bey said the South Salina corridor could be one of the most viable areas in the entire city, if not the county. He referred to a study done by Syracuse’s Maxwell School in 2005 that found that people living in the corridor had more concentrated buying power in retail on average than many others.

The problem, Bey said, is that that money is being spent outside of the corridor because residents can’t find what they need there and because of blight and scarcity.

Such concerns are one of the main reasons the Southside Community Coalition has generated projects such as the Eat to Live Food Cooperative – which just opened to provide fresh produce and groceries.

A park on the vacant space behind the library is another idea.

“It’s just not an attractive site to have a lot sitting there, cars parked on the grass. It’s not something that you want to see and it’s certainly not something you want potential patrons to see when you’re hoping that they’ll come to your area to spend money,” Bey said. “We have to make the necessary efforts to improve our area if we are looking to attract small businesses or private businesses to improve our area and also to attract government support. There is no reason not to have some of just under $120 million be used for the South Salina Street corridor. That would just be not in any way intelligent, and the city knows this as well. “

Attendees got an in-depth look at the park concept from two presenters: Marc Norman, director of Upstate: A Center for Design, Research and Real Estate at Syracuse University – in charge of the initial designs – and Terry Horst, a landscape architect with Maxian + Horst, in charge of implementing the plans.

They explained that the design considered the popularity of the Beauchamp Library and the tendency to use the grass lot as a parking area.

Hayden wasn’t the only South Side resident concerned the park boundaries were not well-defined, and that it would attract illegal activity that could spill over and be in clear sight of neighbors, passers-by and library patrons.

“I’ve fought and bled in this city and I am all for growth,” said one Syracuse resident who lives right next door and was concerned enough about potential fallout from speaking out that he asked that his name not be used. “But my concern is my privacy and privacy for my family. I don’t want people to be parking in my driveway, I don’t want to be picking up extra litter around my house and I don’t want violence to carry over on to my doorstep.”

He suggested addressing the problem by clearly defining boundaries and including some sort of shield so park-goers couldn’t see into residents’ homes.

Bey argued that while there could be some negatives to overcome, the community can’t be intimidated. A native of Syracuse, Bey told the crowd that he grew up in “the bricks” and wants progress for the South Side. There are many positives that could come with the park, and that is better than doing nothing, he said.

“You can’t rebuild this neighborhood without rebuilding this corridor,” Bey said. “When you look at Westcott Street, it has a long history of businesses surviving and strong community support. That is the same effort we are trying to make here. We are trying to make this a better area for the residents as well as the city. We cannot live in fear of what could happen. If we do, then we are not going to go anywhere.”

Muhammad said construction could start in early spring, but he emphasized that nothing is set in stone and conversations with the public will continue.