Martial Arts Leaders Use Their Art to Strengthen the Community

When Daniel Hammond gets ready to break bricks, he sees more than the pile in front of him. Careful to ensure the bricks don’t slip on the ground, he arranges three around a towel on the floor. Hammond raises his hand and breathes in, envisioning the brick broken into rubble. Hammond then smashes his hand through the brick on top, breaking it in half. 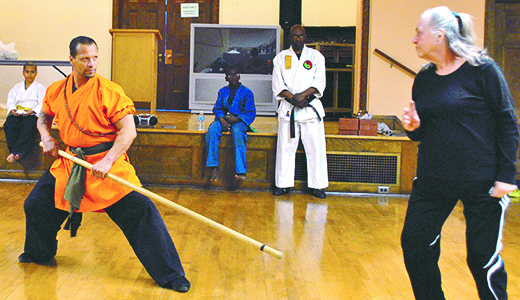 Using a bow staff, Sifu Dan Hammond gives a demonstration with the help of one of his students, Alice Smith, 71. Smith says she is a cancer survivor, and she says martial arts helped to save her life. -- Photo by Lena Budd

Hammond was one of three professional instructors to demonstrate martial arts at the Beauchamp Library at a event held last month. The demonstration was not just a martial arts demonstration, though, for the kids and parents who crowded around. Hammond said brick- breaking takes focus and concentration, and is a measure of a person’s inner power.

“It takes 22 pounds of pressure to break a brick but only six to 16 to break a bone,” Hammond said.

According to Master James Brown, the organizer of the event, the martial-arts gathering was held to suggest an alternative to crime for kids. 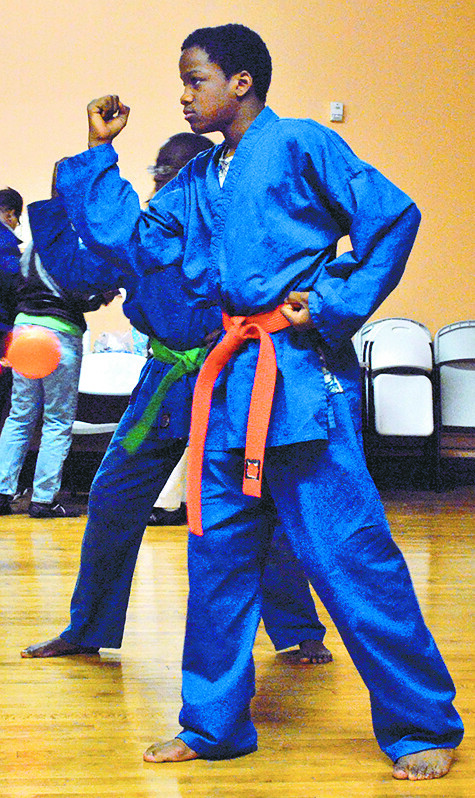 Naseem Fielder, 13, and Bishop Sims, 12, practice karate at Beauchamp Library on Feb. 23. They say karate helps them deal with bullies. It teaches them how to defend themselves and how to walk away. -- Photo by Lena Budd

“It gives them a sense of character,” Brown said. “We have to do a lot more if we’re going to capture the mind of the youth. We have to get them before the streets get them.”

Naseem Fielder, a 13-year-old martial arts student and demonstrator at the event, said he used to get bullied at school. Now an orange belt in Ninjutsu, Fielder said if he is being hassled, he is able to protect himself.

“I use to get mad and out of control, I didn’t know how to stop it,” Fielder said. “Now I know what to do.”

When asked by an adult in the audience what kids should do when confronted with drugs, Hammond said to keep it simple.

Hammond said he knows about drugs firsthand. He said one of his students had a child with his daughter; Hammond made the young man promise not to use drugs, but Hammond said he believes that promise was broken. The man killed his child — Hammond’s grandchild — and Hammond believes he was under the influence of the drug known as “water” — a marijuana cigarette that’s been dipped in embalming fluid and then laced with PCP.

To help the youth of Syracuse avoid crime and live a life of prosperity, Hammond said he advises kids to keep training, have confidence, and keep their minds from wandering. 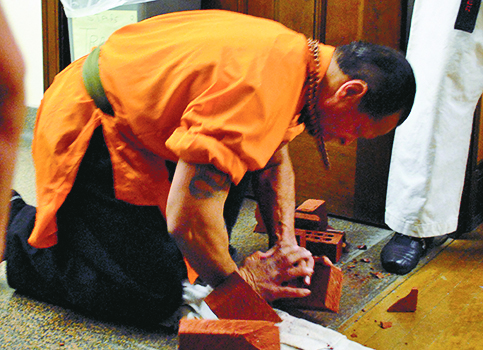 Sifu Dan Hammond learned how to break bricks at the age of 9. He says that in breaking bricks, concentration and discipline are as important as strength. -- Photo by Lena Budd