Hosted by Mayor Stephanie Miner and the City of Syracuse, the event is the first in a series of potentially weekly events that will be called “Trump Tuesdays.” Following an outpour of nationwide protests against President Trump’s temporary travel ban that restricts U.S. entry for refugees and travelers from seven Muslim-majority nations, Miner wanted to provide a platform for Syracuse residents to understand the local impacts of nationwide policies. 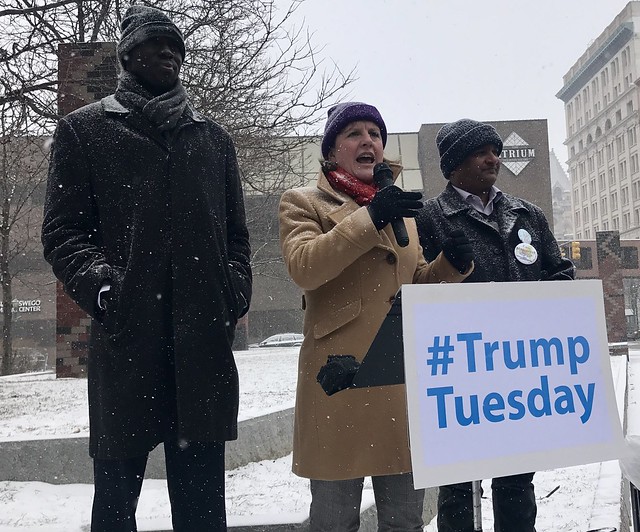 “I thought it would be important to share the stories of real people who live in our city so that people could understand this is not happening to strangers,” Miner said. “There are real victims here, and those victims live on your street, on your block, in your city, in your neighborhood.”

Chol Majok, a refugee from South Sudan who is now an aide to Mayor Miner, shared his story of escaping persecution in his home country to begin a new life in America.

Refugees from Sudan are temporarily no longer allowed into the U.S. under the new travel ban.

President Trump also signed an executive order last week that suspended the Department of State’s Refugee Assistance Program, effectively causing Syracuse’s Center for New Americans– a program run by Interfaith Works that provides resettlement services to local refugees– to cut back its staff and limit its hours of operation.

Jay Subedi, a refugee who spent 18 years in a refugee camp in Bhutan before moving to Syracuse in 2008 and getting a job at the Center for New Americans, has been laid off.

“I am losing my job because of the new President,” Subedi said. “We are cut. I am done now.”

Subedi said that many in the refugee community are now living in fear because of the President’s new policies.

“Some of the refugees live in so much fear, they want to move to Canada,” Subedi said. “I am telling my friends across the country ‘Don’t live in fear. Speak up for the truth.’” 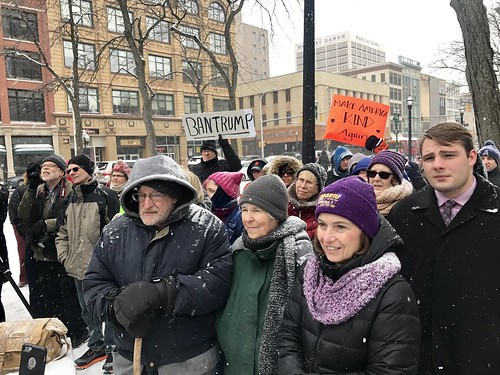 A crowd gathered at noon to hear from Syracuse’s mayor and local refugees during the city’s first Trump Tuesday event.

“Trump Tuesday” events are a growing nationwide trend, and Mayor Miner hopes to make them a weekly occurrence in Syracuse.

“As a mayor people share with me their stories, and I’ve been hearing stories for months about people’s fear of a Trump presidency,” Miner said. “These stories need to be told by the people experiencing them so we as Americans can understand their impact.”

Miner encourages community members to discuss their personal experiences with Trump’s policies at the next “Trump Tuesday” event. A time, date and location for the next event is yet to be announced.

— Article and photos by Samantha Mendoza, The Stand Staff reporter