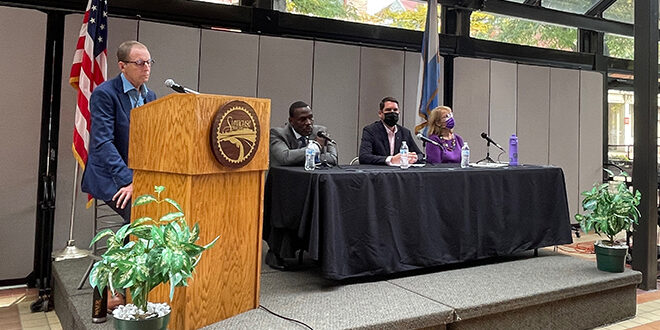 Syracuse mayoral candidates Khalid Bey, Ben Walsh and Janet Burman each identify with different political parties but share one consensus: With the right leadership, Syracuse could have a bright, sustainable future.

The candidates discussed sustainability in politics at a mayoral candidate forum held Oct. 8 at the City Hall Atrium, where a small, socially-distanced crowd attended and more than 100 others tuned in via livestream.

WAER 88.3 FM News Director Chris Bolt moderated the conversation, which explored topics such as local impacts of climate change, air and water quality, environmental racism and how to foster sustainable economic growth for the city of Syracuse.

Bey, Walsh and Burman are running in this year’s race for mayor as democrat, independent and republican candidates, respectively. Walsh currently serves as mayor, while Bey serves as a common councilor at-large. Burman is an economist and former New York Workers Compensation Board official, but has not yet held public office in Syracuse.

Making Syracuse a more sustainable community will take a lot more than increased funding, Burman said. From studying economics at Converse University and Carnegie Mellon University, to her own involvement in environmental activism, Burman believes that Syracuse’s environmental challenges won’t be resolved with one-shot policies.

“As an economist, I understand we’ve got to set the right structure so that we can, in fact, move forward on sustainable initiatives,” she said.

Walsh pointed to his administration’s track record in addressing sustainability, including having retrofitted LED technology in public street lights and effectively saving $1.5 million annually in lighting costs for the city. Having LED lights now has also reduced the city’s greenhouse gas emissions by approximately 5,000 pounds per year, he said.

“We inherited a lot of the industrialized racism that we experience in neighborhoods like mine,” Bey said. “I have a respiratory issue as a result of living in close proximity to (the I-81) viaduct. I’m one of those children who grew up with that issue.”

Bearing in mind Syracuse’s history with I-81 and its immense impact on air and living quality, as well as its effect on transportation and traffic flow, there are multiple paths forward to address climate change in Syracuse, the candidates said.

Walsh stressed that his administration is currently looking to install more electric vehicle charging stations throughout the city. In addition to this, Bey identified neighborhood walkability and other transportation access to markets as key to addressing carbon emissions. Vehicles running on compressed gas could also be part of the solution, Burman added.

Regardless of how the next Syracuse mayor chooses to begin approaching sustainability in the community, current efforts such as the future construction of a community grid won’t bring significant change without further action, Burman said.

“I think it would be a mistake to say that we’re solving the problem of environmental racism by taking down the (I-81) viaduct,” she said. “What’s going to happen after the viaduct … there’s still going to be a very busy, highly traveled corridor there.”

Burman would work to increase community engagement in discussions of sustainability to ensure that the city effectively addresses each environmental issue it faces, she said.

Syracuse has an opportunity now to address environmental racism as it undertakes ReZone Syracuse, a city project to update the city’s zoning ordinance to better reflect land use and future plans for community growth, Bey said.

Walsh agreed, noting that the city’s next steps after the community grid would need to come from informed decision making.

“I think we are very much in agreement that the Blueprint 15 initiative, and frankly all of our initiatives, cannot make the same mistakes of the past, and we need to learn from them,” Walsh said.

The city can also make greater sustainable investments in other areas of infrastructure, such as trash collection and citywide access to broadband internet, Walsh and Bey noted.

Neighborhood revitalization will also be key to embracing sustainability, Bey said. The city will need to incentivize mixed income housing as it examines rezoning, Walsh added — a task he also said he looks forward to collaborating with Bey on.

Burman disagreed, and said she does not think the city government should be in the business of homebuilding. Rather, the city should focus on providing grants for home improvement.

In answering one of the forum’s final questions, the three candidates did collectively agree that supporting new, undocumented Americans is especially important for the city. The Syracuse community that exists to this day would not have its same unique, diverse identity without a committed history of supporting incoming immigrants and refugees, Walsh said, adding that the city also recently began welcoming Afghani refugees.

“There’s value when you attract new cultures and you support new cultures,” Bey said. “This is what our country is about, and obviously, absent that very idea, I’m not sure if it’s the same America any of us are accustomed to.”