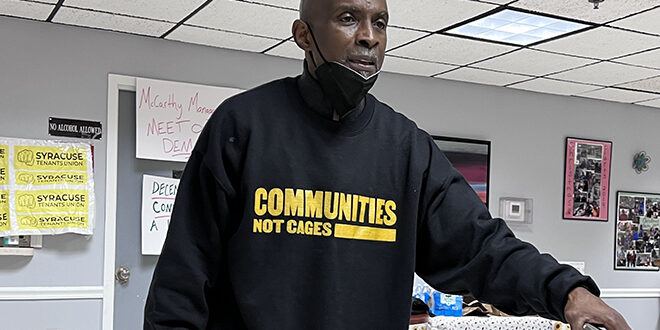 McCarthy Manor tenants and fair housing advocates gathered early Wednesday for a press event, levying damning accusations against the building’s management related to the apartments’ state of disrepair and threats of retaliatory measures against tenants who sought help from city officials.

The “unacceptable” living conditions found within the walls of McCarthy Manor — an affordable housing building serving seniors, located at 501 S. Crouse Ave. — prompted residents to come together and form the building’s own tenants association, tenants said. The group linked up with tenants’ rights organizers from the Syracuse Tenants Organizing for Power (STOP!) Coalition last fall to present a set of demands to building management.

This list of asks included addressing infestations of bed bugs and cockroaches within the next two months, securing the building’s entrance and hiring 24-hour security within the next month, installing COVID-19 protocols for building tenants, addressing mold and issuing rent receipts for tenants. So far, tenants claim they have received no response to their communications with management.

McCarthy Manor Tenants Association President Anthony Bibbs, 64, said management threatened to evict him after he complained about a leaking roof and started organizing meetings with the building’s tenants and members of the STOP! Coalition.

“I went to the office four weeks in a row to talk about it,” he said. “I called the city’s Division of  Code Enforcement, and they showed up when I called. They helped us get our roof fixed.”

Bibbs received a document from management suggesting he could be evicted. The eight-story, 176-unit building is managed by Related Management, a management group linked to multinational real estate developer Related Companies. In a statement, a spokesperson from Related Companies said there has been no retaliatory action taken against tenants.

“McCarthy Manor strives to provide all residents with a safe, clean and affordable living experience,” the statement reads. “We take our residents’ concerns seriously and took immediate steps to rectify the problem as soon as we were made aware. Claims of engaging in retaliation of any kind are false.”

Company sources did not confirm nor deny issuing a document indicating Bibbs could be evicted, but did note while eviction proceedings are rare, at times they are initiated for the protection of staff and residents. A Feb. 2 report from Syracuse.com indicates the document issued to Bibbs accuses him of yelling at the property manager and interfering with a rent survey.

According to the company, the building was inspected by Code Enforcement officials on Jan. 26 and management received notice of two minor plumbing issues in a single unit. Both of those issues, sources said, were rectified by Jan. 28 and are expected to be reviewed by city officials in the coming days.

Bibbs and members of the STOP! Coalition noted management has engaged in further retaliation by prohibiting the tenants association from posting on the building’s bulletin boards, restricting the hours of the community room to prevent tenants association meetings and closing down the first floor bathrooms, which are compliant with the Americans with Disabilities Act (ADA).

Mary Traynor, an attorney and member of the Syracuse Tenants Union, said the fear of tenant organization and media awareness of the building’s status spurred management to mitigate communication among tenants.

“The only thing that has done anything here is tenant organizing,” Traynor said. The only thing that got any change were the words ‘press conference.’ Management does not care if you call Code Enforcement. We came here. We started organizing, and they responded by closing the community room and issuing an eviction letter to (Bibbs).”

Sources with the management company said while the community center was closed for a short time due to COVID-19, it is now open. The common bathrooms on the first floor are open as well after repairs were made.

Code Enforcement, according to Bibbs and company sources affiliated with the building’s management, have said that, outside the plumbing issues, the building is up to code based on an inspection performed last fall.

“What type of inspection did you do?” Bibbs said. “You said you inspected, but how is this building passing an inspection when we have bed bugs and we still have no decent heat.”

Bibbs said the lack of heating in certain hallways in the building, as well as in the apartments themselves, is an example of the complex’s dismal living conditions.

“We have to wear a coat just to go dump our trash. The hallways are so cold,” he said. “We pay so much in rent here and we shouldn’t have to have space heaters at home or use a stove to heat up our homes.”

“You can just snatch that front door open,” Bibbs said. “What security are they offering us as senior citizens?”

Tenants eventually united over the lack of change in their living conditions.

“This is neglect that has been going on for years,” Bibbs said. “We are tired of it. We need to have decent living conditions.”

For building resident Louis White the perceived inaction of management remains a concern.

Fighting for his fellow tenants is a form of mutual support, said Bibbs, who is battling prostate cancer.

“I am aggressive about this because this is where I got my second shot at life,” he said. “God put me here, and all these people who surround me have helped me get up, walk with pride and with confidence. I am grateful for them. I love this building.”

“The city will try to deny the existence of these issues or say that it is up to the minimum requirements for compliance,” he said. “The simple truth is that we all know no Syracuse tenant should have to deal with these conditions.”

Syracuse Director of Code Enforcement Jake Dishaw was present at the press event and proposed to host an open house in the near future where city experts can help ease residents’ concerns. He also told tenants he inspected the building prior to Wednesday’s event.

“What I can tell you is that the city cares about you,” Dishaw told tenants. “Some of the things that are on your list of demands are things I cannot directly help with, but there are other avenues you can take toward that support. It is urgent that if you have issues with your apartment, you go to management, document when you report these issues or tell your tenants association. If that doesn’t get resolved, then you call Code Enforcement, and we will be here.”

Traynor, who co-founded the Syracuse Tenants Union, said a robust Code Enforcement division is a good start toward housing justice.

“Keep your eye on the prize,” she told tenants. “A strong, robust, Code Enforcement division is a very important part of change. But the only thing that is going to change people’s lives is organizing with other tenants, not relying on a nonprofit or a city agency. Have a good relationship with codes, call them, and hold them accountable.”