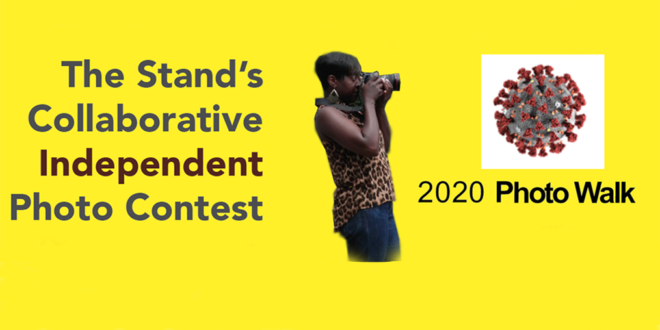 Five categories were open to showcase our community’s response, actions and activities during COVID-19. Such as how childhood and sibling connection continues despite this difficult time, life in quarantine or practicing social distancing and wearing masks. Messages of hope spread on windows, lawns and local businesses as well as current protests that challenge racism.

Now five local photographers will review all entries, come together virtually to discuss and pick winners. Later this month, we’ll reveal the top picks online and hear what the judges had to say. You can tune in as well.

Images will also be published in our September print issue, on our website and online in our Flickr archive and shared with the community as part of the Urban Video Project exhibit downtown, projected onto the Everson Museum of Art.

Meet Our Panel of Judges:

Bob Gates
Fine Arts Photographer Bob Gates has volunteered with The Stand since 2016 and he’s been a longtime member of the Syracuse Camera Club.

He studied photography at the University of Iowa School of Art and the Santa Fe Photography Workshops. His photographs have won numerous awards, been published in several magazines and have appeared in many group, individual and juried exhibitions in CNY and elsewhere.

His drone photos have been exhibited at the Schweinfurth Memorial Art Gallery and the Tyler Art Gallery at SUNY Oswego, and have been published in Stone Canoe, The Photo Review, and Donescapes, a book from Thames and Hudson. His drone video won a gold medal at the first NYS Drone Festival in 2017, and one of his photos was judged among the best drone photos of 2016 by Time.

Cherilyn Beckles
Visual Artist Cherilyn Beckles is a recent graduate of the Newhouse School’s graduate program in visual communications. Her undergraduate degree is in broadcasting and public justice from SUNY Oswego.

She has worked with The Stand for the past year and recently covered Black Lives Matter protests in Syracuse. Her work is one of three exhibitions currently on view as part of the Community Folk Art Center’s online gallery — “Cherilyn Beckles: Syracuse Black Lives Matter Protest.” Her participation in the group Last Chance for Change, as a protester against police brutality in the Black community of Syracuse, inspired her to document the movement. Several of her images were also included in the Urban Video Project’s BLM display in rotation on the exterior wall of the Everson Museum of Art.
@noellaphoto

David Haas
City Advocate David Haas was born and raised in the city of Syracuse, living in the Eastwood neighborhood, an area he continues to call home. He completed degrees at both SUNY Oswego and SUNY Cortland. He works as the Executive Director of Sarah’s Guest House, a healthcare hospitality home located in the Strathmore neighborhood.

Most notably, David owns and operates the Instagram account, @SyracuseHistory for which he has won several local and state awards including two consecutive 1st place prizes from the Syracuse Press Club for “Best Use of Social Media.”

Much of Megan’s work incorporates photography, fibers or the nexus of both and explores social landscapes along the veins of gender and class. Her work has been exhibited both nationally and internationally, reviewed in the Journal of Appalachian Studies, is held in several collections including Special Collections Research Center at Syracuse University, and has been featured by numerous publications including Oxford American, NPR’s CodeSwitch and Politico Magazine. She is also a photo editor for Looking at Appalachia and teaches Photography at SUNY Oswego.
@mgking_

He is a native of West Grove, Pennsylvania and a graduate of American and Syracuse universities. He grew up with a fond appreciation for the work of Gordon Parks and W. Eugene Smith.

Terry’s goal with SIF is to produce accurate and memorable images — not to focus on making Syracuse a better place to live, but rather on identifying the things that make it worth living here in the first place.

Images from SIF have appeared in ESPN NY, About Time Magazine, as well as local tourism guides and online publications.