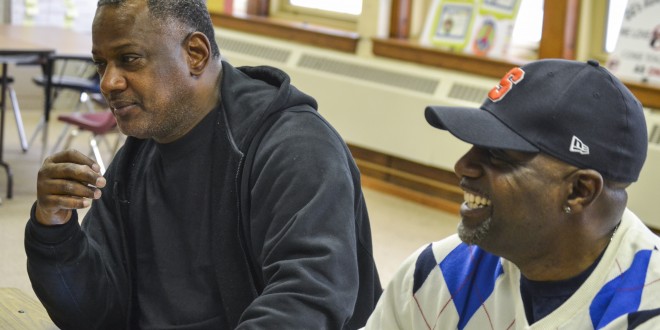 General Davis (left) and Greg Odom (right) listen intently to a story told by one of the boys in a Real Fathers/Real Men meeting at Danforth Middle School. Photo by Ari Gilberg. 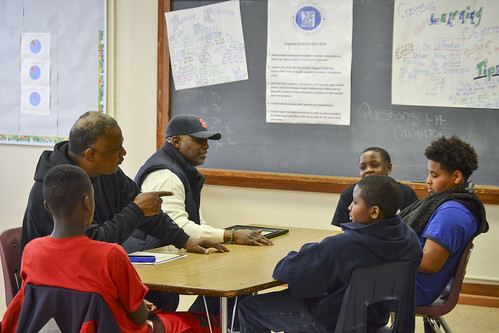 As a much younger and dangerous man, General Davis held the top spot in a criminal outfit called the South Side Corleones. The gang pulled off armed robberies, drug trafficking and shootings with similarly inclined young men. Davis took beatings, got shot, and did time in jail.

Now 57, Davis has channeled his energies into a different approach to his old neighborhood — offering companionship, direction and support for young men and boys growing up in families headed by single mothers. It has been nearly a year since Davis and Greg Odom, a former drug dealer, founded a program called Real Fathers/Real Men. The group’s mission is to provide a father figure for those without one, and also to help educate children on the dangers of turning to gangs and drugs.

He does not want to see the South Side’s children make the same mistakes he did, he says.

“If we give kids the love they need, then they’ll give us their attention,” Davis said. “When the streets raise a child, they’re raising a beast. … They can’t get out. It’s like a vacuum that sucks them back in.”

Since last spring, Davis and Odom have shared their concerns through talks to students in Syracuse’s middle and high schools. Their message: Avoid drugs and walk away from gang recruiters.

Real Fathers/Real Men has worked with nearby Danforth Middle School since November. Dr. Ronardo Reeves, principal of the school, said he already has seen a change in his students’ behaviors.

“There have been some positive impacts,” Reeves said. “I’m hearing from teachers some of the things that the students have learned. You know, they’re able to practice some self-restraint. I think they talked about hitting women, and men are not supposed to put their hands on women, and things like that last week. And one of the students actually was hit by a girl — like they do in middle school — and he came and told the teacher what they’ve learned and why he didn’t hit the young lady back. So, they’re making some positive gains.”

Besides his work with Danforth Middle School, Davis will host a workshop to be held within the next month for four other schools in Syracuse: Westside Academy at Blodgett, Henninger High School, Fowler High School and Institute of Technology at Syracuse Central.

The workshop will take place at The Determination Center, which provides services for at-risk youth. 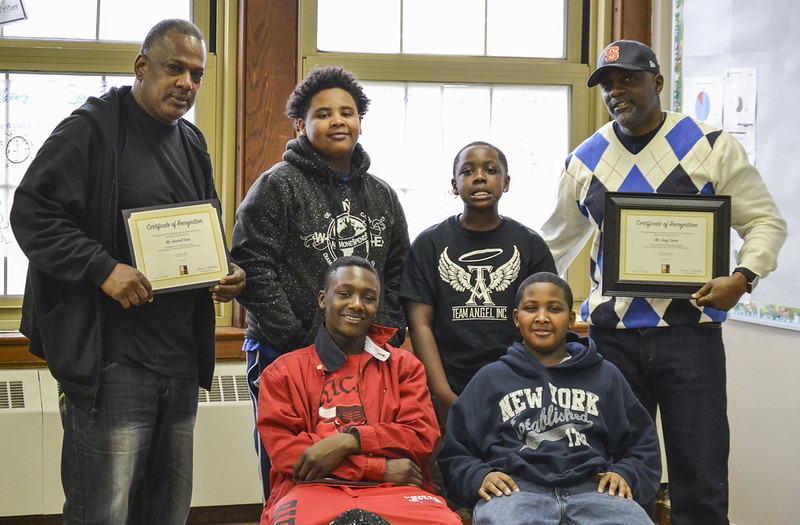 The two will utilize three main props: a casket, a mock jail cell and a wheelchair. These props symbolize where young men most likely will end up if they decide to turn to gangs, drugs or other forms of street crime, Davis said.

Real Fathers/Real Men also serves as an after-school program, in which Davis, Odom and a few volunteers act as fathers to participating children. The Determination Center is usually where the group holds meetings and also where children can relax and engage in fun activities, such as playing basketball and video games.

Davis said it’s important that the mentors do everything they believe a father is supposed to do — whether that means helping youth with their homework, watching a movie or just going out to eat at McDonalds.

Bettie Graham, who runs The Determination Center and also grew up with General Davis, described Real Fathers/Real Men as a rewarding program that can help accomplish her goal of providing a safe haven for as many kids as possible. She said that Davis’ past involvement with gangs and crime allows him to share his story and establish a unique connection with youth. 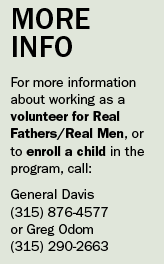 Davis and Odom say they believe that if they had a father figure in their own lives growing up, then they most likely wouldn’t have turned to gangs and selling drugs.
“We’re trying to fill that gap — that bridge — where there is no father in that single-parent home,” Odom said.

One of the most memorable experiences Davis has of Real Fathers/Real Men came during a trip out to eat with a group of kids in the program.

“I remember we were going to … get some food. And we got up to go inside and one of the kids turns around and says, ‘Can we sit down like a family and eat our food,’”
Davis said. “Can we sit down like a family — a 12-year-old boy asked that question. So the thing they’re missing at home is sitting down, a father sitting down at the kitchen table. Something as simple as that means a whole lot. It’s big to a baby, big to a child.”

Nyhiem Huggins can attest to that. Huggins has participated in the program since last October.

“They treat us well. They got our grades up, our behavior up,” Huggins said. “They want us to not do the bad stuff that they chose to do. They want us to do good.”