The Central New York Fight for 15 Coalition kicked off its minimum wage challenge on Sunday, March 6, inviting the public to take part and follow along with those who had already pledged to do so. 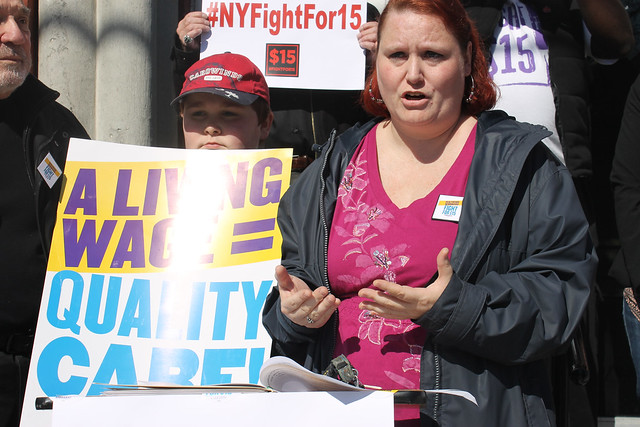 As a low-wage worker, Carlita Adamy talked about what a difference $15 an hour would make for her and her family. Her son, Logan, left, attended the press conference as well.

For five days, more than 20 volunteers, activists and leaders will live on the minimum wage of $9 an hour, or $97 a week after taxes, housing and utilities. The challenge is intended to simulate how difficult it is to make ends meet as a low-wage worker. The organization wants to see the minimum wage in Syracuse raised to $15 an hour.

“The folks opposed to a minimum wage of 15 dollars, they haven’t had to live on the wage,” said Common Councilor 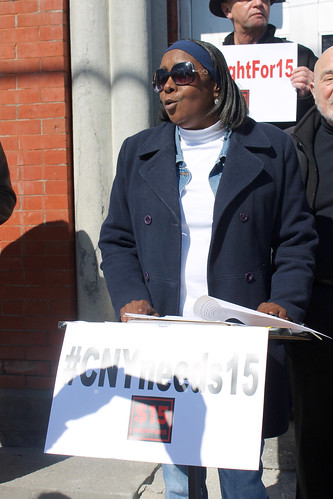 Syracuse Common Councilor Helen Hudson said that by raising the minimum wage, people may not be so reliant on government assistance to supplement their income.

Helen Hudson, who will be participating in the challenge. “I was one of the minimum wage workers, raising a son, running a household, and it’s a little tough when you have to make a decision to feed your kids or pay your bills.”

At the press conference on March 6, at St. Lucy’s Church on Gifford Street, members and supporters of the coalition held signs and spoke about the importance of increasing the minimum wage to $15.

Other cities, like San Francisco and Seattle, have already passed laws to eventually raise their minimum wage to $15. At a rally in Syracuse on Feb. 5, Syracuse leaders including Mayor Stephanie Miner and Common Councilors Hudson and Khalid Bey spoke in favor of the idea. In New York state, however, the minimum wage is set by state lawmakers. At the end of 2015, it increased from $8.75 an hour to $9.

Recently, state Sen. John DeFrancisco, who represents areas of Central New York, held a press conference and spoke out against the wage hike. At the conference, he encouraged business owners to talk about how the increase in minimum wage would adversely affect their businesses. Jerry Lotierzo, the chairman of the coalition, responded to DeFrancisco’s comments and the few perspectives included at his press conference.

“I was shocked by the fact that he didn’t have any low-wage workers,” Lotierzo said. “He didn’t have anyone there who could speak about how difficult it is to live below that 15 dollars an hour living wage.”

Lotierzo encouraged the people gathered at St. Lucy’s Church to write to and call Sen. DeFrancisco to express their disagreements with his statements.

The people undertaking the challenge March 7 through 11 include congressional candidates Colleen Deacon, Eric Kingson and Steve Williams, DeWitt councilors Kerin Rigney and Sam Young, and many representatives from 1199SEIU and other Central New York organizations.

Last year, a report ranked Syracuse as having the highest rates of concentrated poverty among black and Hispanic people in the United States. The members and supporters of the coalition hope that a raise in the minimum wage can alleviate that.

“If we’re really serious about turning New York state and Syracuse around, it’s long overdue for them to lift the minimum wage,” said Lawrence Brooks, who is also taking on the challenge. “It’s time for our politicians to do the right thing.” 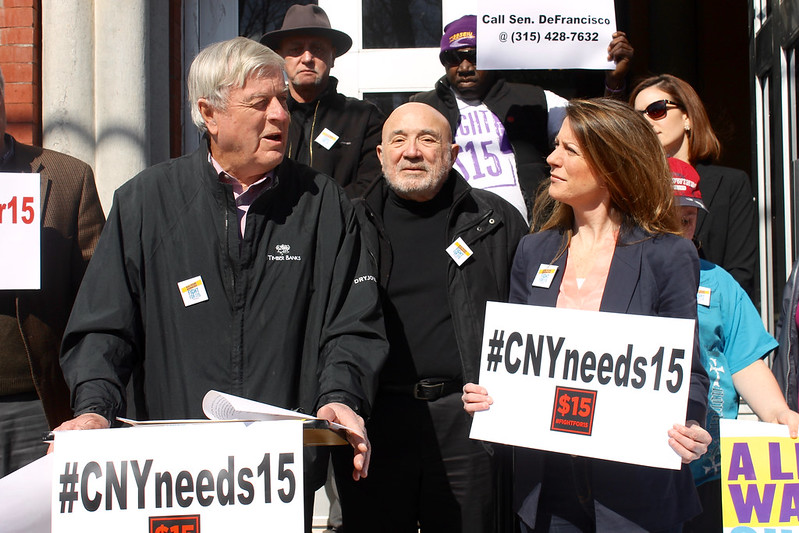 Pastor James Mathews of St. Lucy’s Church urged the crowd to think about whether Jesus would be in favor of or against raising the minimum wage.