More than a Barber's Chair

Barber shops, salons in the South Side cultivate friendships and a sense of community

Thirty years ago Lionel Milliken went looking for a barber and found a friend.

That friend, John Murray, not only cuts Lionel’s hair, but now cuts the hair of Lionel’s wife, Carol.

On a recent day in the barber shop, the three friends chatted about Murray’s vacation in Florida. They talked about playing golf and having dinner soon while Murray trimmed Carol’s hair.

Being a friend is one role Murray, 68, plays in the South Salina Street barber shop that bears his name. Murray is the only old-fashioned barber left on the South Side, he said. He offers friendship, advice, humor, a listening ear — all the sort of things people need on any given day, along with getting three weeks’ worth of hair growth trimmed neatly back.

Carol Milliken is Murray’s only female customer, besides his wife. In fact, Carol Milliken had to persuade Murray’s wife to let him trim her hair three years ago. That’s when the relationship between the Murrays and the Millikens started — when the wives got involved. 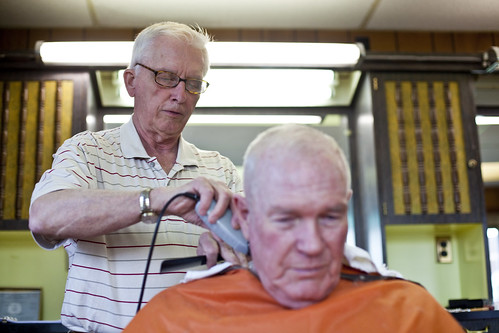 “They began chatting and that turned into dinner, then we played cards and that’s where we are now,” Lionel Milliken said.

Carol Milliken said Murray trimmed her hair better than a woman’s hair salon did. And she liked the price better. The prices aren’t the only reason customers choose to go to Murray.

“There are a few guys that’ll come in and bring coffee and chew the fat for a half hour or so,” Lionel Milliken said.

Vince Moriarty is one of them.

Moriarty worked in a gas station on Valley Drive where Murray’s previous barber shop was located. Murray was friends with the owner of that gas station and became friendly with Moriarty. Moriarty’s 16-year-old grandson lives around the corner from Murray’s current barber shop so around 3:30 p.m. almost every day, he stops in to say hello.

“I get my hair cut here, too, about once every three weeks,” Moriarty said.

When he isn’t getting his hair cut and is in the shop, he sits in a waiting chair as Murray sits in the haircutting chair, and they chat. They talk about sports, politics, and even poke fun at each other.

Rashida Shabazz, owner of Rashida’s Transformations Center on South Salina, cuts and styles men’s and women’s hair. She said contrary to the belief that women love to talk while getting their hair done, men who come into her salon chat more than the women do.

Shabazz moved here from the Bronx seven years ago, and she decided to open a salon in 2006. But to her it is more than a salon.

“Getting your hair done is a transformation. It transforms personalities and transforms people from the outside in,” Shabazz said.

While she is styling or cutting her customer’s hair, she said she has heard stories that she may have not wanted to hear.

Shabazz said one client told her about his personal life while getting his hair cut at 8 a.m. She said it was too early to be hearing details about his relationships with women, but she wanted to be there for him, so she listened.

“It’s funny with male clients because as women we think guys don’t open up,” Shabazz said. “And now I see they’re just having the barber shop experience.”

Like Murray, Shabazz speaks about a range of topics with customers. She starts by asking what the customer’s plans are for the weekend and then the conversation starts. She gives advice to Syracuse University students, she talks about sports with Orange fans, discusses politics with the older men, and she can gossip.