The Dunbar Center reopens, looks to start a new era for residents

One of the South Side’s oldest institutions has opened its doors after a short downtime, bringing back a wealth of opportunities for residents of all ages.

Ever since its founding nearly a century ago, the Dunbar Association, a community center at 1453 S. State St., has provided refuge for children, the elderly and other adults –– except for several months beginning last fall. Now, as the center’s staff looks forward, it has plans to not only reinvigorate community programs, but also to keep the center financially stable in the long run. 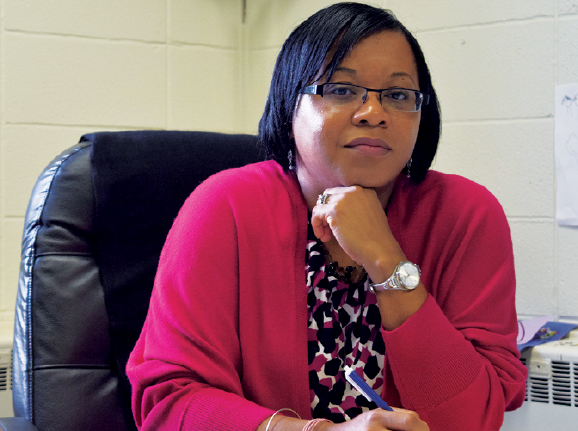 Dr. Chandice Haste-Jackson is a newcomer at Dunbar. She assumed the role of interim executive director only two months ago. “Some people said we needed to go bankrupt and start over,” she said. “But we’ve been here 96 years. We’re starting fresh in a new era. We just need to re-fashion to fit the community.”

Jackson spends much of her time as director writing grant applications. As of now, the center is asking for $85,000 for youth services programming and more than $75,000 for building repairs and refurbishments. The center’s elevator broke recently, which Jackson said didn’t surprise her –– the building’s structure is as old as its legacy.

But Jackson is intent on moving forward. She said a lack of financial guidance from Dunbar’s board contributed to the 2013 closing, and she doesn’t want to repeat the same mistake.

“We need to remember the history and celebrate it, but look to the future at the same time,” Jackson said. “The balance can get tenuous. We have old stuff we still need to fix, and if you don’t learn from the past, you can’t really learn anything new.” Jackson wants to have more board members, some with financial expertise. 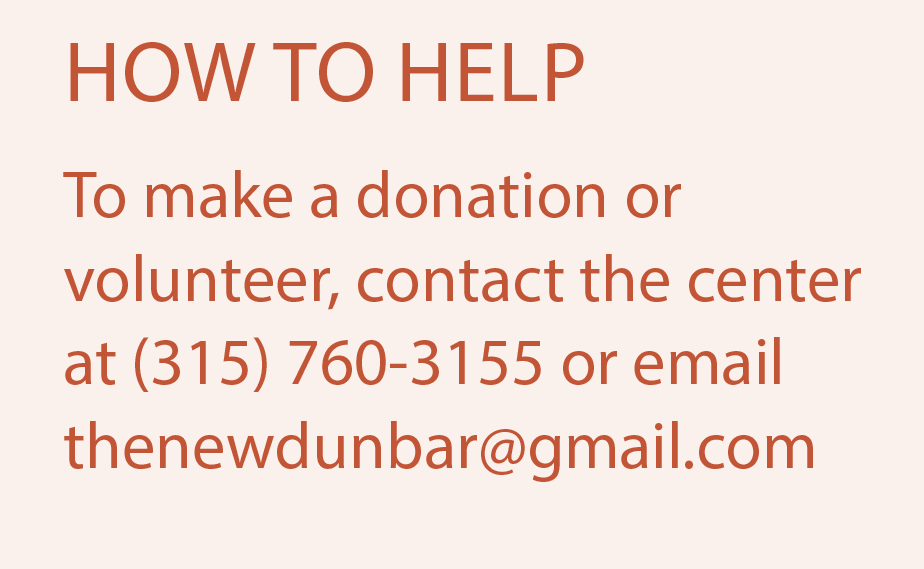 Dunbar’s newest offering is a Zumba class. This program is instrumental in attracting new members, Jackson said, as the exercise encourages people of all ages to go to the center. But its purpose is twofold –– by monitoring its patrons’ physical progress, Dunbar can gather scientific data to include in its grant applications, raising the community center’s credibility with donors.

As for the rest of the programs and services offered, the list includes: after-school day care, food pantry, arts and crafts, tutoring, mentoring, gardening, cooking and nutrition, dance classes, and even an “Adopt-a-Family” program that supports an impoverished family with the help of a generous benefactor. Jackson said she wants the center to become the gathering place it used to be, when it brought kids in off the streets and provided a welcoming family for elderly residents. 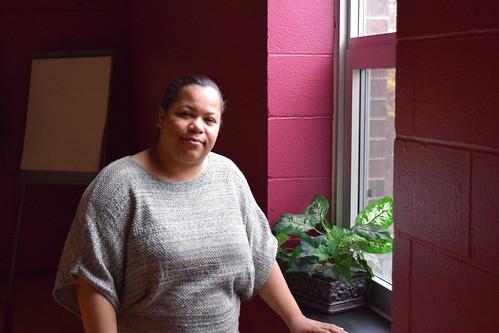 Latischa Brooks works with the elderly members of The Dunbar Center and is working to establish more social activities in the future.

Latischa Brooks has been working with Dunbar’s older members for months. Her life has been punctuated by frequent visits to the center. She grew up nearby and is coming up on 30 years in the human services field.
Brooks talks about the center’s older members with a smile. She remembers hearing an elderly woman’s stories while working the polls recently, and the stories she told about getting people out of their homes to vote.

“They’ve been ingrained in this community for so long, longer than any of us,” she said. “And they know when they’re making a difference. The youth can learn a lot from their elders, but it doesn’t always work like that on a day-to-day basis.” 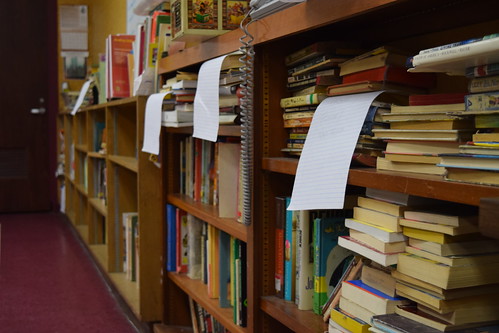 The Dunbar Center library is being revamped with the help of Onondaga Community College.

Brooks’ father is the youngest of 16 siblings, and creating a supportive community at Dunbar is her way of repaying what he did for her as a single father. She said she hopes the center can become “the place where everyone goes to have tea at night.”

As for the younger members at Dunbar, there is no shortage of community support. The after-school program offers a balance of reading, writing, math, science and art. Doreen Shaffer, director of youth development, said the staff wants to combine all these different disciplines to make the kids’ time at Dunbar beneficial.

“We have a book club, where the kids will read, and then write about the book, and what they thought of it,” Shaffer said. “Then they’ll do artwork based on what they read. It’s a well-rounded experience.”

The youth director and her assistants implemented a system called Dunbar Dollars. Children are given fake money for outstanding behavior, academic achievement, good manners or generous actions. With the currency, they can buy small items, such as toys, or even snacks.

The children are also encouraged to be resourceful. When they found a pingpong table without a net, they fashioned their own to drape across the green surface.

As the Dunbar staff ventures further into the center’s future, they need to be resourceful, too. Besides looking for donations, grants and experienced employees, they also are seeking volunteers.

Billy Denham-El is one such volunteer. He grew up on the South Side, studied at State University of New York at Oswego, earned bachelor’s and master’s degrees in education, taught at Fowler Middle School and founded the 1500 gang on South Avenue.

Investigations have led Syracuse police back to the 1500 for crimes such as shootings and robberies.

“I believe in my city, and I believe in the children,” Denham-El said. “It’s important for them to look up to someone who doesn’t have a jail record. They’re surprised when they learn that I was with 1500, and I never had a record.

“I took my hustle and I took it into education.”

He said Dunbar could be instrumental in molding the kids into assets for the community. Both he and Brooks said they want to see kids leave Dunbar to pursue Ph.D.s, productive careers and endeavors that benefit those that come after them.

“We need to give these kids the tools to move properly in society,” Denham-El said, pointing toward State Street from the Dunbar conference room window. “These people care. Dunbar is an unorthodox approach for unorthodox times.” 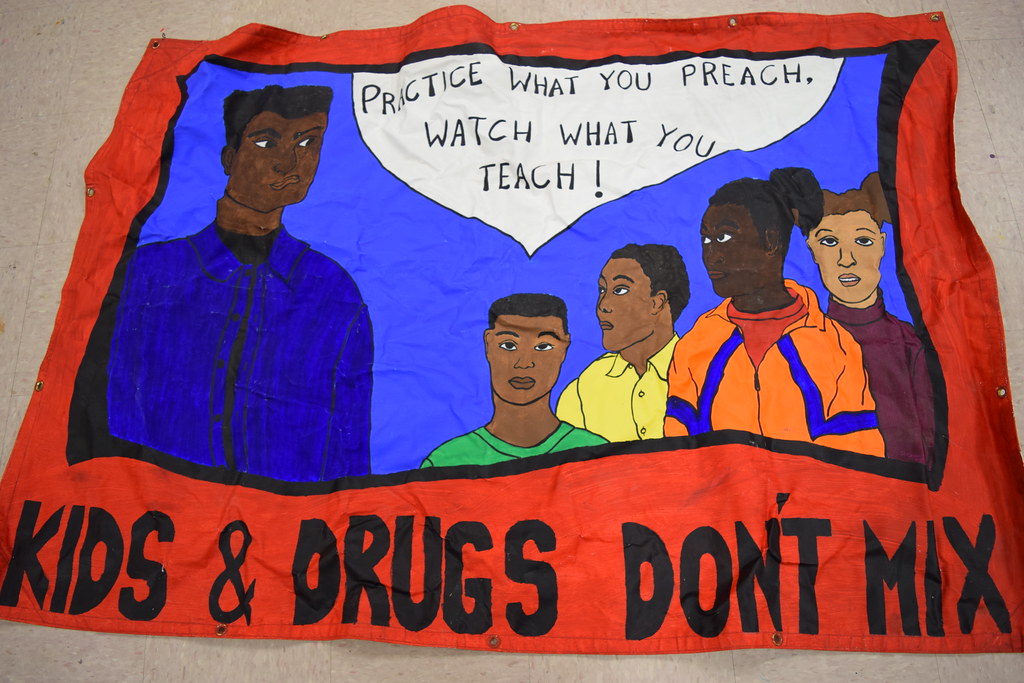 The youth at the Dunbar Center spend as much time with artistic pursuits as they do with math, reading and science.