As March of each year rolls around, we start to think about the impact of women on our world. Women have been leaders in just about all aspects of modern society, including politics, business and religion. Music is no different. For Women’s History Month, it is fitting for the Friendly Five column to talk about women in music. 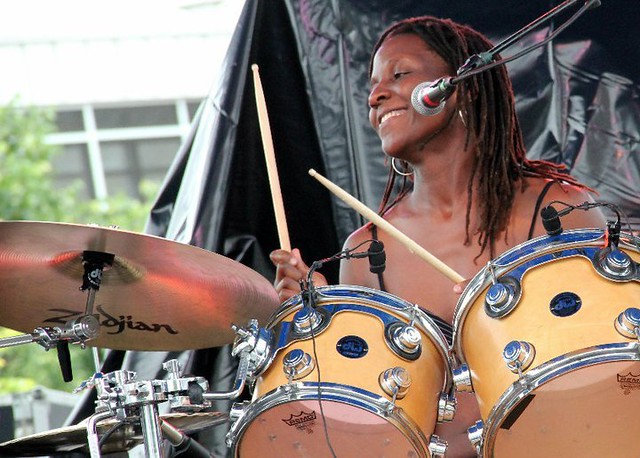 In the male-dominated music industry, people might have to think a little to name a few female instrumentalists but surely they will come up with some. Actually, I can readily think of a few. There’s Aretha Franklin, Patrice Rushen, Carole King and Alicia Keys. They are all keyboard masters. And then there’s India.Arie, Lauryn Hill and Bonnie Raitt, who play guitar. They, as the first group, are also singers/songwriters.

Locally, we have a few women instrumentalists, too. Quickly I can think of mother and daughter team Phyllis and Phylicia Reaves. Phylicia, 20, is now in her third year at Albany State University. Before she went to college, she and her mother played a lot in the local churches. Phyllis has been playing the piano in church for more than 30 years. She grew up playing the piano in church as a member of a family group. Her aunt, Rener McFadden, was the group’s director. Phyllis continued the tradition by teaching Phylicia about music. She allowed Phylicia to accompany her with the drums while she played the piano at church. Phylicia eventually began learning to play the piano herself.

Eveny Parker and Susan (Sue) Royal are two others. Eveny teaches music at Nottingham High School, her alma mater. She began learning to play instruments when she was a student there.

“When I saw that there was a need for a bass player in the band, I said, ‘I can do that.’ So I picked it up and played it.”

She has also been known to play the drums and the piano for the same reasons. She is a leader like that. She has the ability to step in and pick up the slack when things are lacking. For example, when the church that she and her family attend needed a drummer, she played drums for them. Now she’s playing the piano for her students because there is a need.

Sue is a professional drummer and uses the guitar to write songs. It’s natural for her because she comes from a musical family. Her father, Thomas Royal, was a very popular saxophonist with the Emeralds and one of her uncles played the trumpet with various bands. Her two sisters also play guitar. Sue plays the drums in a couple of working local bands. Her main band is The Shakedown. The Shakedown plays a mix of covers and original music. Recently, they completed a recording and made a video at the famed Sun Studio in Memphis, Tenn. She is also one-third part of an all-female “project band” called Miss 3. Their membership includes Missy “Miss E” Ragonese, guitar, and Kate Kolb on bass.

I asked Sue why there weren’t more women instrumentalists.

She answered: “A lot of young girls don’t get the encouragement needed to pursue it.”

She offered the following advice for young girls who want to be musicians.

“Find a musical mentor and a spiritual mentor,” she advised. “Young girls should also get into the music programs at their schools.”

“I was told that I could do it, and I believed it. I also knew that it (music) could be used as a vehicle to getting my education.”

“SU offered a scholarship for me to go to school for the tuba, so that’s what I did. I liked the tuba because it is a bass instrument, and I like the way bass instruments function in music. I don’t consider myself to be a fluent player (meaning that she’s not a virtuoso). However, I am a very literate musician.”

If it was all about personal desires, Eveny said she wouldn’t mind being a stage manager on Broadway or for another large venue. She also expressed the need for leadership in our public education and expressed a potential interest in pursuing a career in administration possibly as a superintendent.

Whatever the future holds, Eveny enjoys being a musician and providing mentorship for other young girls who want to be musicians and just need someone to tell them that they can do it. And, oh yes, that goes the same for boys, too, with her.

The common thread between all of these women is that they all had someone there to encourage their desires to become musicians, even though the field is dominated by men, I believe that there are many more Phyllis & Phylicias, Evenys and Susans out there.