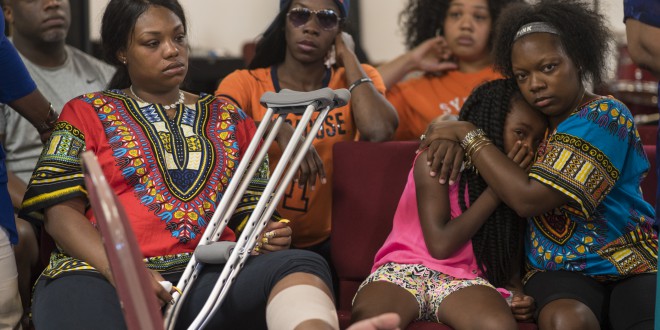 Residents gather in response to Sunday’s shooting to strategize, call for independent review of incident

Local residents were allowed to vent their emotions Tuesday evening at the Fountain of Life Church. The meeting organized by Twiggy Billue, president of the National Action Network Syracuse Chapter, was in response to a chaotic melee on Syracuse’s Near West Side Sunday evening where gunfire broke out at an annual Father’s Day celebration resulting in one death.

With tensions at a near breaking point, Tuesday’s meeting aimed to unite the community’s anger into an organized, rapid response. 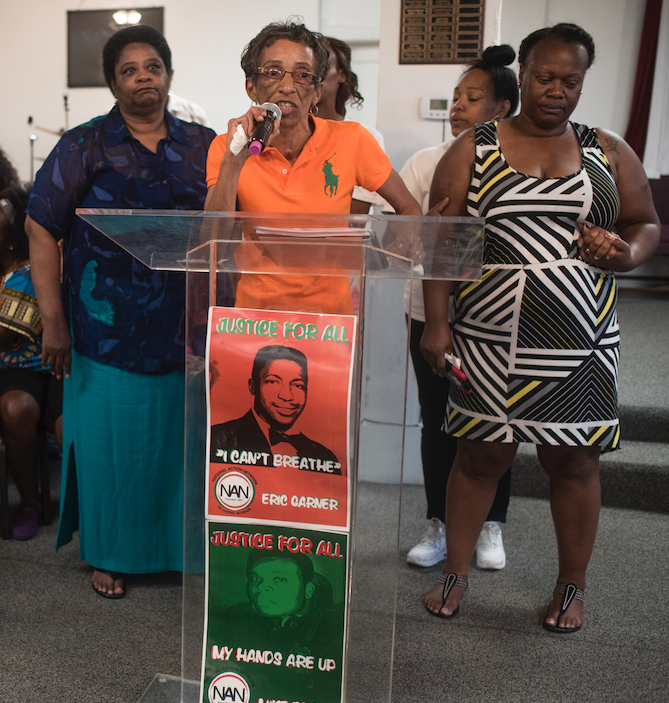 “We are not here tonight to ask anyone to calm down,” Billue said. “I too want answers.”

Many family members of the victim Gary Porter, also known as Terry Maddox, attended. His sister spoke to the crowd, saying she was trying to stay strong for her niece and for his unborn baby, both now fatherless.

“[My niece] attended the barbecue with both her parents,” she said while holding the girl in her arms who began to break down into sobs. “She’s left now with only one [parent].”

“Tonight we are here to vent in a way that can bring us together,” said Walt Dixie, executive director of Jubilee Homes.

He reminded attendees to remember Ferguson and use the lessons learned from that to move forward. Don’t be voiceless, maintain the status quo and allow leaders off the hook, he emphasized throughout the night. Dixie and Billue both said they have had phone calls with The Rev. Al Sharpton, NAN president. Sharpton told both he would confer with the Attorney General after reviewing a report by Billue summarizing this meeting.

A main goal is to get answers, and to do that Billue says there must be an independent review. “Starting tonight, we must do something different. We can not continue to operate in the same mode or nothing will change.”

Other complaints by organizers: how no help was provided by trained counselors to ease the traumatic impact. “If this was Manlius, counseling support would have been immediate; town officials would not allow their youth to move on without offering this,” organizers agreed. “A tragedy like this weighs on our mind.”

Fear and lack of trust in the SPD, a fear that is rightly so inherited Billue stressed, was felt widely. One woman stating: “How can we trust the police when they are raping and now killing — they’ve been killing us.”

Talina Jones, co-chair of NAN and chair of New York Civil Liberties Union, told attendees the best way to be proactive is to put their anger to work. 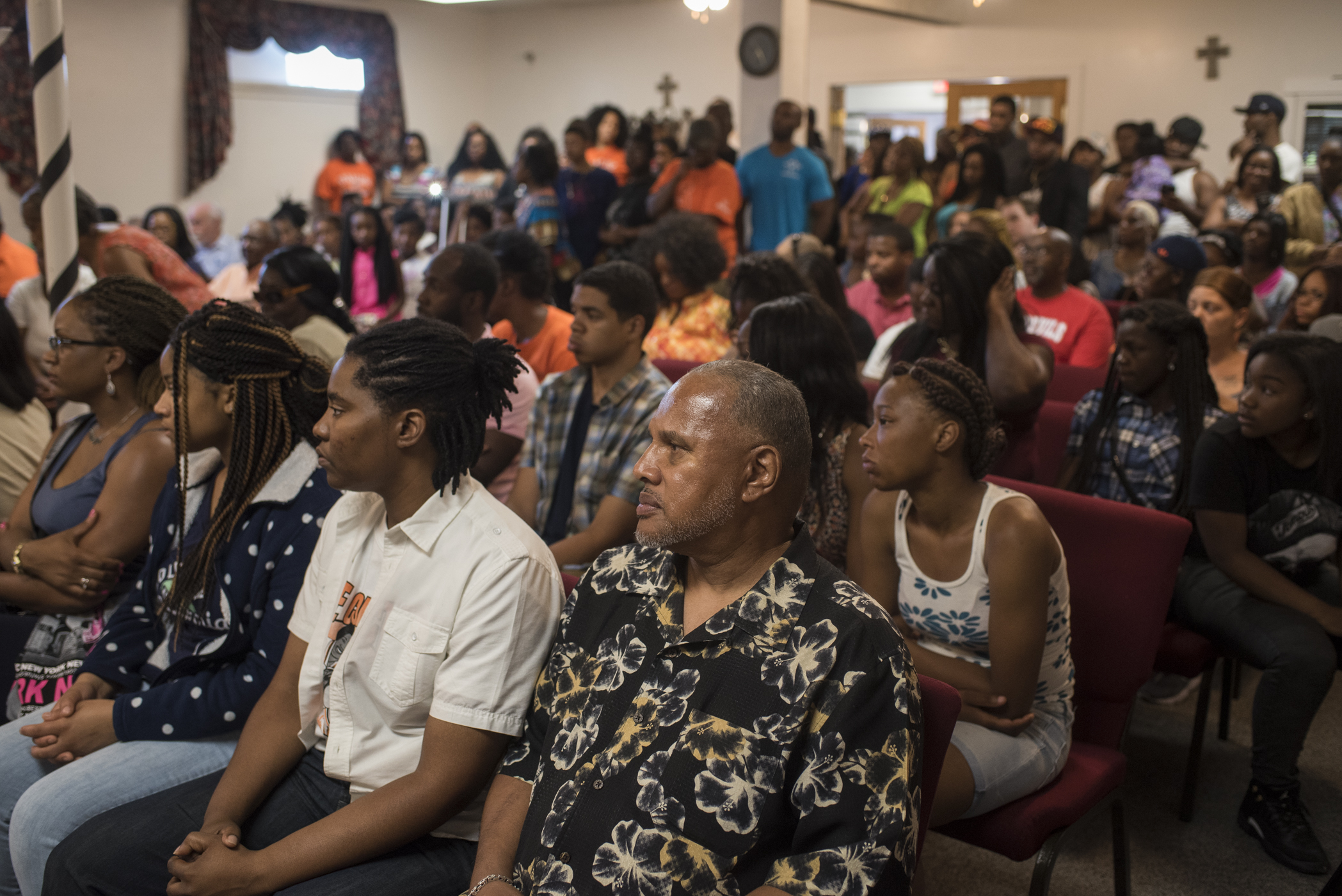 A large crowd fills the Fountain of Life Church during a meeting organized in response to the shooting death of a man at an annual Father’s Day cookout held near Skiddy Park. | Ben Cleeton

“You have the right to protest,” she said. “And the NYCLU will be there to ensure your civil liberties are protected when you do.”

“We have to plan our own rapid response,” Billue said many times.

She said NAN will obtain all necessary permits and protest with family and the community as long as they want.

“[Our protest] will be law abiding, but [police] will not be able to suppress us,” Billue added. “If they want to arrest one of us, they will have to arrest all of us. As long as we are orderly, do not touch my people [directed toward police] because we will march for answers. And I will march whenever you want to march. We meet Saturday, and we can strategize a plan to march Monday … then we’ll march Monday. You want to march Sunday, we’ll do that. We are here for [the community] and will ensure all permits are obtained. You just have to show up and have to be consistent with showing up.” 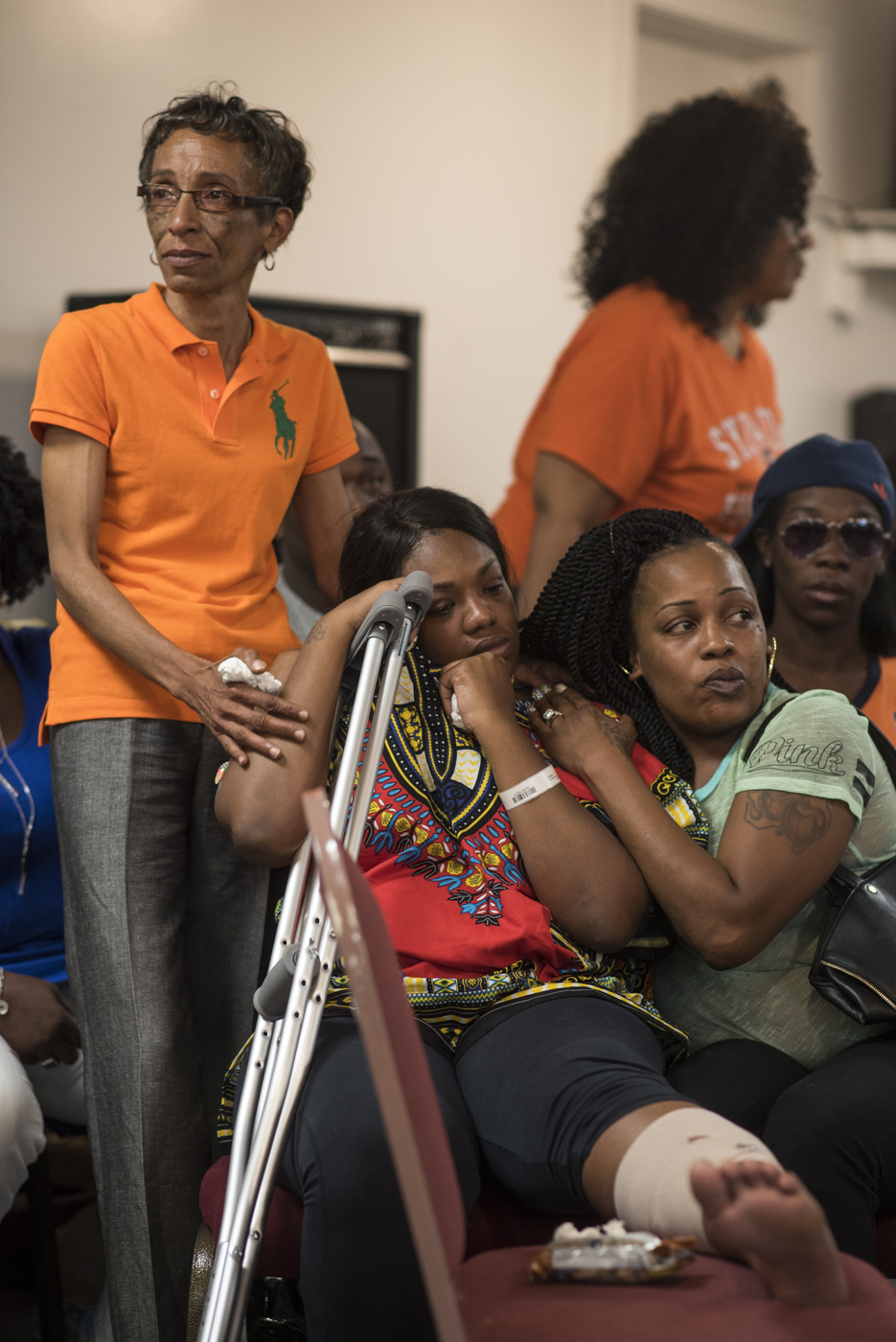 NAN will hold a planning meeting at 10 a.m. this Saturday at the church, located at 700 South Ave. All are welcome and attendees are simply asked to wear orange in support of Gun Violence Awareness Month.

Common Councilors Van Robinson and Helen Hudson were in attendance. Police Chief Frank Fowler and the new Citizen Review Board Administrator David Chaplin, who were both invited, did not attend, as did no other police officers. CRB member Caleb Duncan did attend and encouraged anyone with a complaint against the police to contact Chaplin at (315) 448-8750, email dchaplin@syrgov.net or in person by visiting the CRB office at 201 E. Washington St., Suite 705.

The CRB’s mission is to hear and address citizen complaints against members of the Syracuse Police Department.

If you are not comfortable sharing through the above office, you may contact Yusuf Abdul-Qadir, chapter director for the New York Civil Liberties Union, at (315) 471-2821 or yabdulqadir@nyclu.org. Witnesses or complainants may contact the NYCLU without fear of retaliation.

During the event, Billue said one focus of Saturday’s planning meeting will be to assign volunteers roles, for example someone to be in charge of a social media campaign to quickly disseminate updates and serve as a central source.

Local residents took to social media after the incident, identifying Maddox hours before syracuse.com and later the police. Syracuse Police Chief Frank Fowler released the name of the man shot and killed during a press conference not held until Monday afternoon. 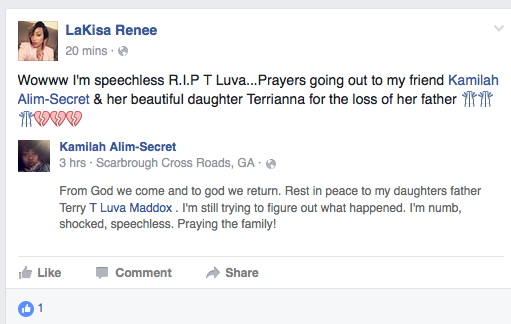 Online, many allegations were also made in comments on Facebook and Twitter that attendees of the annual celebration were unarmed and that gunfire originated by a female SPD officer. 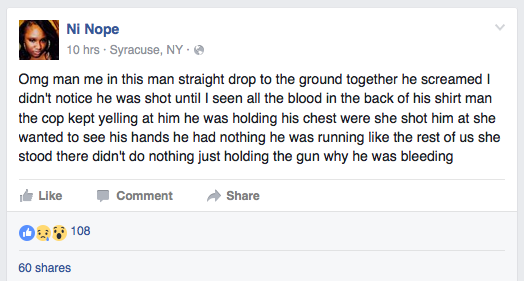 Attendees Tuesday shared similar sentiments. One man, who approached the podium first and who did not give his name, said this was the fifth year the cookout celebration has been held. “We give free food to the kids. We celebrate. Not once has there been a shooting.” Others chimed in that all were enjoying the party and gathered to celebrate the men and father’s in their lives. One attendee said a party goer texted her, saying the party was “lit,” meaning exciting and lots of fun. 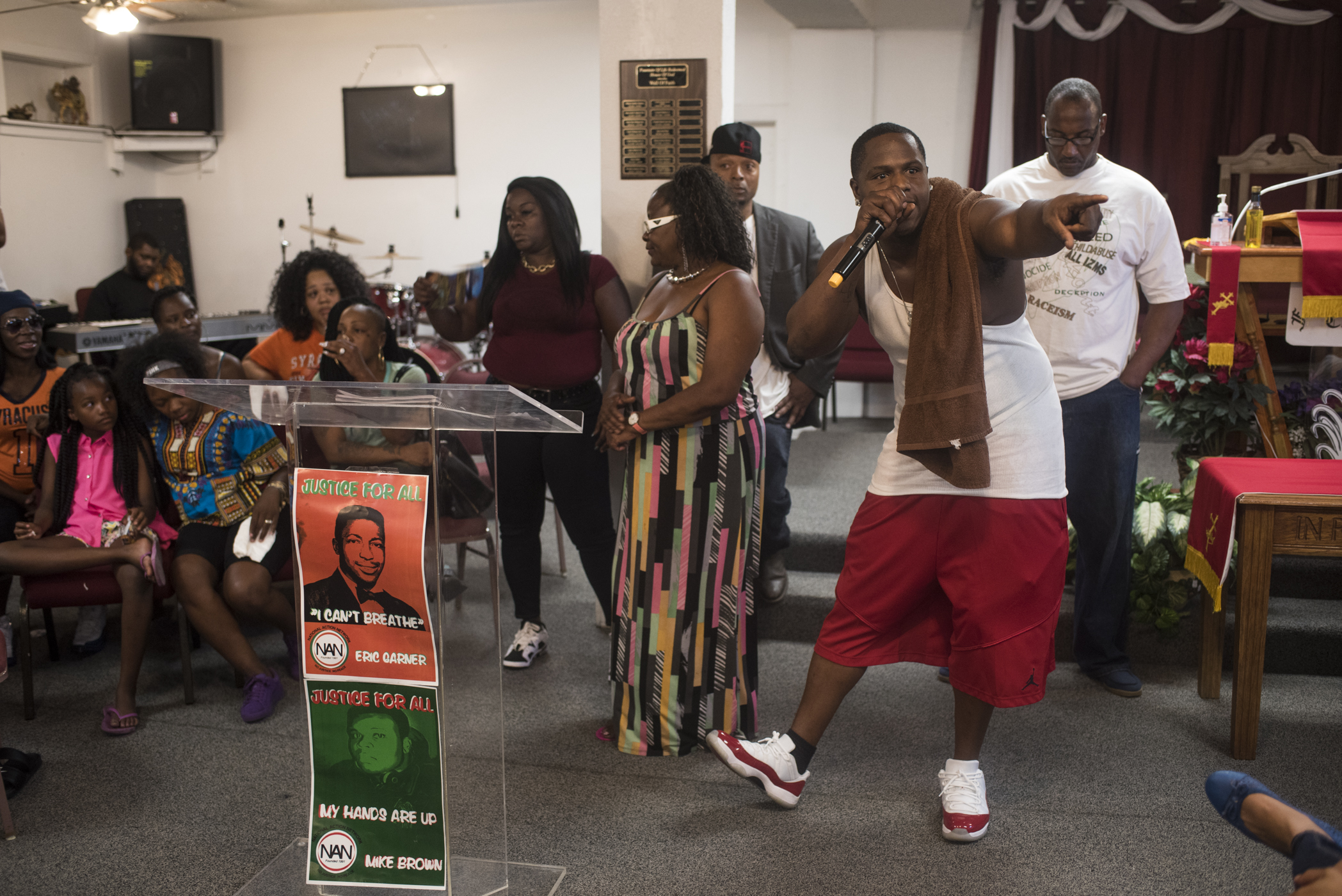 During time allotted for youth to speak out, a man who did not provide his name, voiced his anger with the Syracuse Police Department. | Ben Cleeton

At the meeting’s conclusion, several women, still shocked by the incident, continued to ask why: “Why were people not running before the officer arrived? Why were the kids still playing and jumping in the bounce houses … They weren’t deflated until after she shot her gun? Why is my 6-year-old now afraid of the police?”

The mother of 15-year-old Niquera Jackson who was injured while running from the chaos that night, Yasheka Stevens, is also in search of answers to what happened.

Stevens recounted her experience that night, saying police restrained her from seeing her injured and bleeding daughter, cursed at her and interrogated her daughter before providing medical assistance. She also said it took around 30 minutes for her daughter to get to an ambulance and that she was moved without first providing support to her neck.

“She was asking for me,” Stevens recalled. “She was hurt and calling out for her mother and 20 police blocked me from her.”

Mayor Stephanie Miner made a public statement stressing for the community not to come to judgements based on social media and to wait until all the facts come to light. Miner did not attend Tuesday’s meeting.

Evelyn Tennyson, the pregnant fiancee of Maddox who was also injured, attended but did not give a public statement. She made some audible comments throughout the night, one being: “I was a witness, and I saw police shoot him.”

— Article by Ashley Kang, Director of The Stand