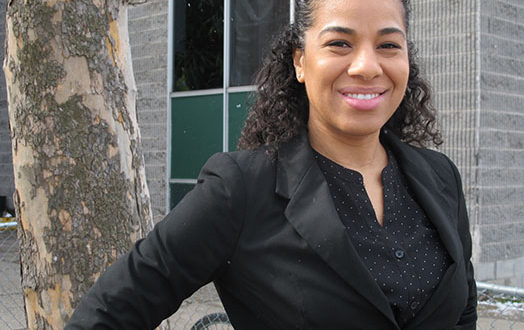 Lawyer helps those who have criminal records conquer barriers to jobs

There is more to one’s criminal record than merely having to check a box on a job application.

A person’s past resurfaces when employers or landlords do background checks. Barriers arise, such as being barred from earning a state certificate, being restricted from receiving educational loans and veering further from jobs that offer stability and that pay a living wage. Self-perception can be damaged by feelings of shame over a mistake likely committed in one’s youth. 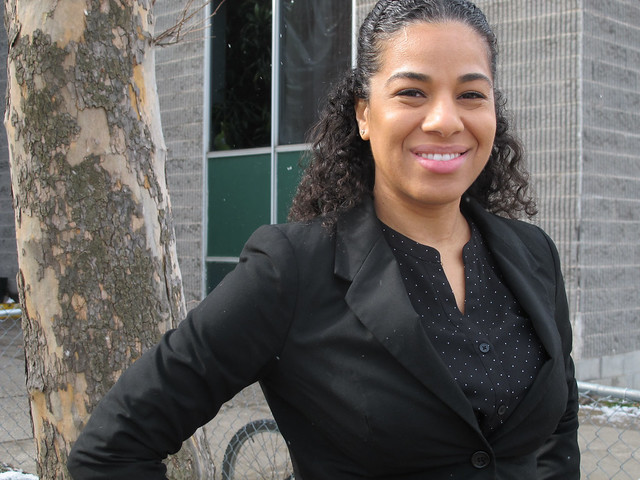 Owens, staff attorney with the Volunteer Lawyers Project, grew up in the South Side and now runs the New Start Program focused on re-entry assistance.

Attorneys with the Volunteer Lawyers Project of Onondaga County each run a division. Owens, 36, oversees the New Start Program – Reentry Assistance. She says her typical clients are women between the ages of 24 and 30 who have misdemeanors on their RAP sheets.

“About 80 percent are young women with children that are trying to get employment,” she said. “Most have done some stupid things when they were kids. They’ve matured. They’ve gone to school, but they can’t get a job.”

New York state does not expunge a record, “so if you ever commit a crime, it’s on your record forever,” she said, stretching out the word’s first syllable for emphasis.

“The next best thing is Certificate of Relief from Civil Disabilities (COR) or Certificate of Good Conduct,” she said, explaining that these certificates state a person has done enough in life to rehabilitate from a past crime. CORs remove some legal restrictions accompanying convictions, particularly state licensure barriers for jobs such as home health aide and certified nursing assistant.

The reentry program started about a year ago and caught speed when Owens took over this past July. The goal was to see 60 clients a year, but Owens already has surpassed that, helping more than 80 clients.

“I think when the program was designed, we didn’t know how much need is out there,” she said.

A study by Alec C. Ewald, published in the “Journal of the American Bar Foundation,” notes that applications for CORs in New York state appear to be underutilized based on discussions with attorneys, judges and probation officers. Ewald found that in most counties, fewer than 5 percent of people sentenced in a typical year sought certificates, showing that the populations who stand to gain from CORs have little knowledge of them.

WHO QUALIFIES
“We’re the only program in this area open to the public,” Owens said, noting that eligible clients qualify for free legal services if their annual income falls up to 200 percent above the poverty line. In 2016, that level was $11,880 for an individual. The Center for Community Alternatives provides a similar service, but clients must meet additional requirements for that program. 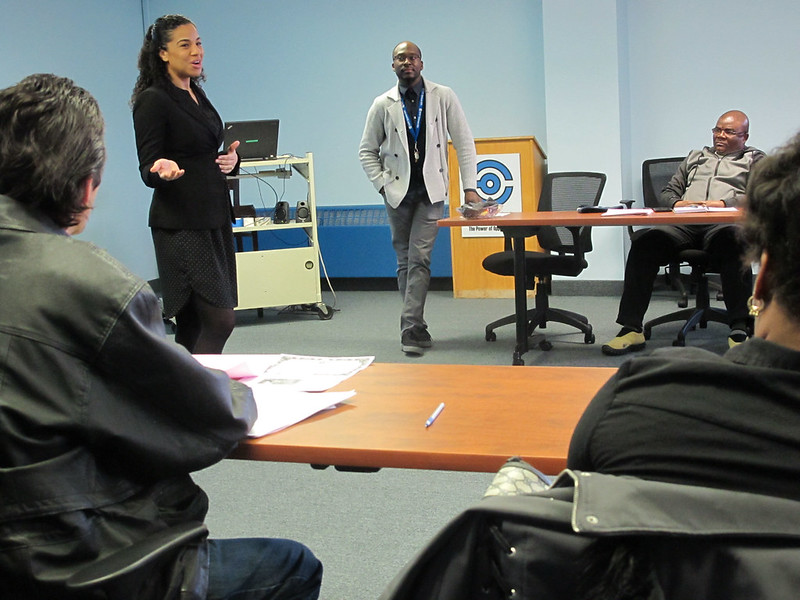 Clients find Owens through the program’s partners — Syracuse Educational Opportunity Center (EOC); Jubilee Homes; The Right Turn Career-Focused Transition Initiative, a job-training program for at-risk youth based at Onondaga Community College — and referrals from others she has helped. To keep up with demand, more than a dozen local lawyers volunteer their time.

The majority of her clients are enrolled in the Health Train program — known for its partnership with Loretto to train certified nursing assistants with a 90 percent job-placement success rate. Early on, Christopher Montgomery, who works with these EOC students, realized that many have a blemish on their record, disqualifying them from earning the state license.

“In my experience, they like to withhold that information,” Montgomery said. In the first few trainings, he did not find out about students’ pasts until training was over, so starting their new jobs had to be put on hold until they could acquire a COR to then seek state certification. He now brings Owens in during orientation so students can start the process early. “I can’t put anyone in front of an employer if they are not going to qualify,” he said.

“Some are so scared when they first approach her, the lawyer, but she is so personable,” Montgomery said. “She creates a timeline for them and takes them through the process step by step to show them how they can overcome this. Lanessa is the number one reason why participants with a past are continuing with this program and being successful.”

THE INTAKE
The first step is the intake session. Owens carries a mobile fingerprinting device with her to every off-site visit because clients usually are not sure what’s on their record.

“This way, I can pull a copy and see what’s there and determine if there are any mistakes,” Owens said. 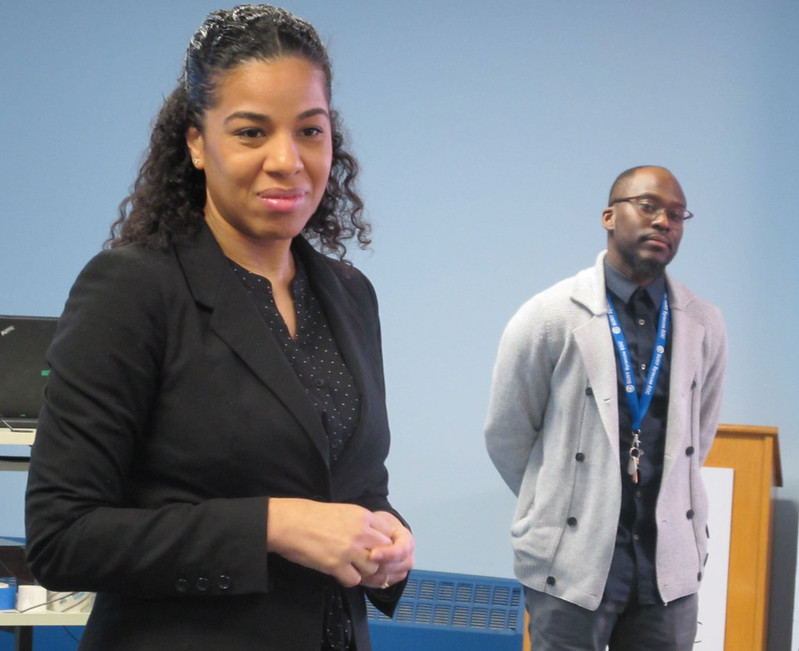 Owens and Christopher Montgomery listen to a question from a student in the Health Train orientation.

During a series of one-on-one intake sessions at EOC recently, Owens fielded questions from students for three hours as they popped in and out of a door connecting two classrooms.

Cachet Woodhall, 22, requested a meeting to verify her record was clear. She previously checked with the criminal courthouse by giving her first and last name and asking that her record be checked. “They said I didn’t have anything, and everything had been sealed,” Woodhall said, “but I wanted to meet with you (Owens) to double check.”

Owens asked her: “Have you been arrested before?”

“Yes,” Woodhall answered without pause. “But it was for something stupid and petty,” she said, explaining that when she was 13 years old, she went for a joy ride in a car that belonged to her mother’s friend.

“I was young, dumb and wasn’t thinking. I think that case was sealed because I was a minor. I was going through the system at that time, wasn’t thinking clearly, wasn’t stable and was acting out,” Woodhall said.

In her teens, she also faced a burglary charge that was later dismissed, and at the age of 18, she got in trouble a few times. She says she was homeless and was charged with petty larceny.
Woodhall says she just wants stability. “I currently work at Burger King, but my hours are unpredictable.” She feels if she is working regular hours at a good job, she’ll be too busy to get into trouble.

“So I want you to be the second person that goes through and makes sure that everything is clear,” Woodhall told Owens before leaving. “I don’t want to enter the health field, go through the training and they hire me and then be told, ‘Oh you have something on your record and we’ve got to let you go or put you on hold until you figure it out.’ I don’t want to have anything on hold,” Woodhall repeated. “I want to start working.”

THE PROCESS
Some 65 million Americans have criminal records of some kind, according to National Employment Law Project statistics from March 2011. Owens adds: If you’ve ever been arrested in New York state, you have a 67 percent chance of having an error on your record. 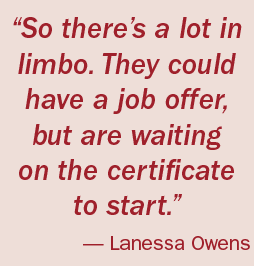 Obtaining a Certificate of Relief is not easy and requires a lot of work from the client — three letters of recommendation; a personal statement; copies of certificates, trainings or education that have been completed; past dispositions; and criminal complaints.

The recommendations should be strong. “They want to see one from an employer, community leader, organization or religious institution — not your friends,” Owens said. “Or if you went through an educational training or rehabilitation program, a letter from someone in a leadership role there.” The personal statement should explain one’s past mistake and how the person changed.

Then dispositions and criminal complaints can be challenging and timely to gather. “It’s not often easy for a lot of people in this situation to get,” she said. “You’re talking about people who typically are living in poverty, have children … it’s a lot of running around to obtain everything.”

The other caveat is that the judge who sentenced a person is the same judge who must grant the certificate. “The reason, presumably it’s a judge that knows you,” Owens explained.

On average, it can take from one to three months, she says, noting that this is after a client has gathered all the paperwork and her office has filed it. “Getting all the paperwork together,” she adds, “could take a client a month or even two depending on the person.”

“So there’s a lot in limbo,” she said. “They could have a job offer, but are waiting on the certificate to start.”

Or if Owens finds an error on someone’s record, she can correct it. “We will contact the New York State Division of Criminal Justice Services by mail or by motion, and we’ll fill out a challenge form,” she said. After the legal team reviews it and if they agree, the record is then changed immediately.

The change should be in effect everywhere, but with so many private companies that compile background checks, she says it could still pop up. “And with the internet, there’s just nothing we can do,” she said shaking her head. “It’s always out there.”

Another element to her job, therefore, is education. “I educate my clients on how to confidently say: ‘This is what I have on my record, this is what I did and this is who I am today.’” To further help, she conducts mock interviews on what to disclose and what is and isn’t lawful for an employer to ask.

Owens says New York Correction Law is unique because of Article 23-A, the state’s employment antidiscrimination statute, which prohibits refusal to hire solely because of a criminal conviction unless there is a direct relationship between the infraction and the potential job. For example, someone with a “driving while intoxicated” conviction would not receive a commercial driver’s license.

Owens optimistically believes employers just want to know that the person regrets what happened and is now a different person. “A lot of my clients are very ashamed, humiliated and embarrassed,” she said. “You can sense this when they talk about their past.”

A poignant example from Owens: a mother who could not find a job, who was arrested for stealing a $12.48 pack of Pampers for her newborn.

“That’s what makes it so rewarding for me because people come in and we get them jobs,” Owens said. “We’re helping mitigate that last barrier to employment.”