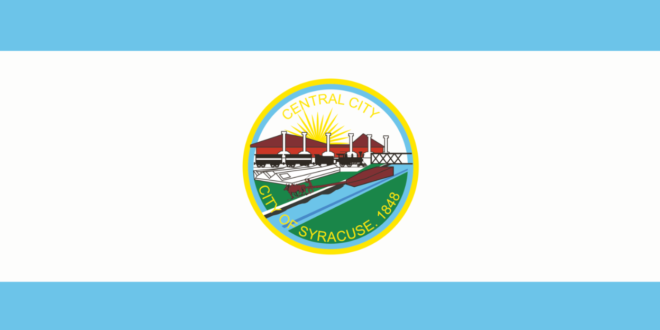 Submissions will be accepted through Feb. 17, 2023

Adapt CNY is now accepting submissions from the public for a new city flag design. Members of the public are encouraged to submit designs to the Flag Redesign Committee, which can be done electronically at syracuseflag.com. Find paper submission forms at libraries, community centers and other civic spaces throughout the city.

Design submissions will be accepted now through Friday, Feb. 17, 2023. The committee will conduct a public input process, host community workshops, determine three to five finalists and ultimately recommend a final design to the Syracuse Common Council for consideration next summer.

Flag designs are encouraged to incorporate important parts of Syracuse’s history and identity, and follow the five principles of good flag design established by the North American Vexillological Association (NAVA):

• Keep It Simple: The flag should be so simple that a child can draw it from memory.

• Use Meaningful Symbolism: The flag’s images, colors, or patterns should relate to what it symbolizes.

• Use Two or Three Basic Colors: Limit the number of colors on the flag to three which contrast well and come from the standard color set.

• No Lettering or Seals: Never use writing of any kind or an organization’s seal.

• Be Distinctive or Be Related: Avoid duplicating other flags but use similarities to show connections.

In undertaking the flag project, Syracuse joins other cities that have recently redesigned their flags, such as Tulsa and Milwaukee.

Earlier this year, Adapt CNY, a non-profit civic organization, convened interested community members and created the Syracuse Flag Committee to facilitate a citizen-led creation of a new city flag. Adapt CNY has worked in coordination with the city of Syracuse and Common Councilor-at-Large Michael Greene. The flag committee met numerous times over the summer and early autumn in order to develop guidelines and the process for the flag redesign initiative. The committee was established following an open call for nominations from the community in Spring 2022 for those interested in supporting the initiative. Its members are: Winn Wasson, Ikechukwu Okereke, Sarah Seib, Tai Ngo Shaw, Tyler Holcomb, Neal Powless and Bridget Dunn.