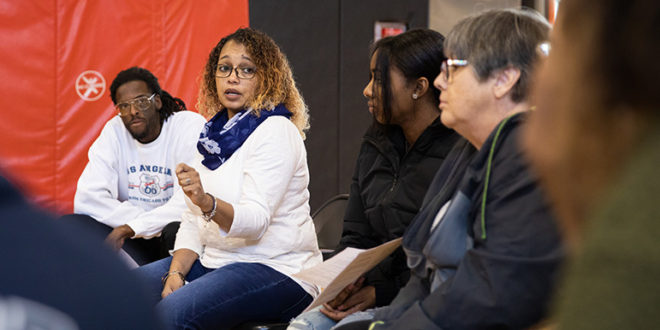 Oceanna Fair speaks to parents on the dangers of lead poisoning during a recent community meeting. Fair, who lives on the South Side, is scared her house may poison her 11 grandchildren because one granddaughter has already been found to have high elevated levels of lead in her bloodstream. | Jessica Ruiz, Staff Photographer

With all the costumed kids running around the gymnasium, dodging their parents and picking up handfuls of candy, bystanders could almost overlook the serious nature of the Families for Lead Freedom Now! event. After a few hours, though, parents were ushered into another room and the real event began: a discussion about the lead poisoning epidemic plaguing Syracuse’s South Side.

According to the most recent available statistics from LeadSafeCNY, children living on the South Side of Syracuse are the most at risk for high levels of lead poisoning, with 26 percent of children found to have elevated levels of lead in their bloodstream in an area where 46 percent of the population lives in poverty.

Oceanna Fair, one of the organizers of the event, knows the tragedy of lead poisoning firsthand, as her granddaughter was poisoned in her own house. “I’ve heard a lot of people talking about what needs to be done — landlords, homeowners — but nobody is communicating with the families,” Fair said.

Fair explained that many people in the community are not aware of the dangers of lead exposure until it’s too late, calling it a “baptism by fire.” She also added that, with some remediation fees totaling up to $30,000, not all families can afford to fix their homes, let alone move into safer ones.

“One of our members, for instance, she was a single mother. When her children became lead poisoned, she had just gotten a good job, she was working, [and] all of a sudden, she needed to take off a ton of time to take these children to appointments to be rechecked, and that cost her her job,” Fair said.

Ellen Morrissey, a member of Families for Lead Freedom Now!, can relate to this experience. After she discovered her grandson had lead poisoning, she was left with very few options and had to scramble to figure out a safer living situation. Morrissey said this left her family vulnerable and drained virtually all of their resources.

“Last night we went to the Dollar Store to get some detergent and had to scrape change together, because every dime we had went into getting that kid out of there and getting him to safety,” Morrissey said.

After experiencing so much fear and uncertainty related to the lead in their homes, the members of Families for Lead Freedom Now! are seeking a change. Darlene Medley, another organizer whose children were both diagnosed with lead poisoning, said the first step is putting together a group that is actually representative of the community.

“It’s time for the families that are being affected by the lead crisis to actually have a seat at the table,” Medley said.

Fair echoed this sentiment, saying the people currently working to address the lead crisis don’t really understand the severity of the issue. “There’s one thing at those tables that I do not see. People who look like us, talk like us, and live in the communities that we live in,” she said.

After watching her own family members suffer from lead poisoning, Fair and the rest of Families for Lead Freedom Now! think enough is enough.

“We want families to have a voice. We want them to be a part of the solution. We want the city, the county, the health department, landlords, to work with families,” Fair said. “Lead poisoning is totally preventable.”