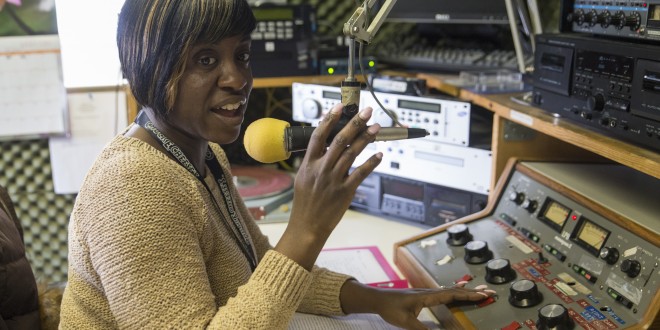 Ardena Harvey sat down, thought, prayed and came up with the game plan for her first ever radio show. She’s admittedly more of a writer than a talker and gets her ideas out better with some planning.

She launched her radio career in December with a weekly relationship show airing on WSIV 1540. The first show, “Relationship Matters with ArDenay,” aired Dec. 7, 2015 and continues from 3:30 to 4 p.m. every Monday on Syracuse’s Inspirational Voice AM radio wave.

Zanetta Green, who immediately precedes Harvey with her own show, “Keep it Realimony,” was the one who asked Harvey to take over on the mic for 30 minutes each week. Green found Harvey while she talked about her book on relationships. 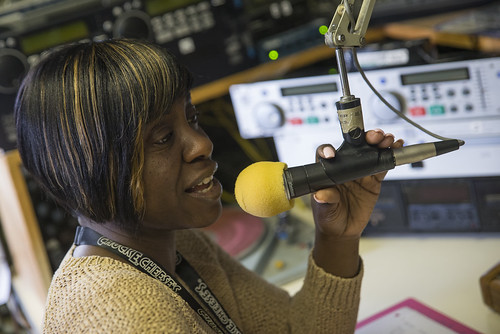 After unexpected life consequences, including taking care of her sick father, Ardena Harvey debated whether to continue her show, but because of positive listener feedback she has kept it going. | Ben Cleeton, Staff photo

“I feel called to deliver the message,” Harvey said. “So I have to be crystal clear that I’m just a vessel.”

Harvey said she’s four chapters into the book, which will be titled “Divine Invitations for the 7 Spiritual Lessons of Relationships,” and writes from 10 a.m. until 2 p.m. each Saturday and Sunday. The writer in her is what helps her script out each moment of her new radio show.

Harvey is a survivor of relationship abuse, detailed in, “Moving Past Abuse,” a story which ran in The Stand last year. The message of her show, which she says will change every month, is centered on different aspects of relationships.

In January, she continued to do her show because of positive listener feedback, despite considering to stop because of new life challenges including taking care of her sick father. With less time to script out her weekly episode, she called her Jan. 25 show “Freestyle Monday” and let callers launch the day’s debate.

For example, during February, she intends to make the message, “love,” partially because of the Valentine’s Day holiday. 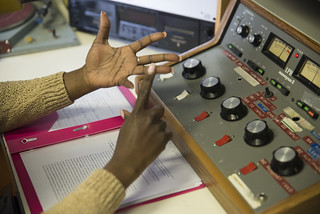 She is currently on a three-month trial run with the radio show and said she would not be bringing any guests on, at least for a little bit, because she wants to get acquainted with the listeners. During the first show, she was pleased with the callers that rang in.

“Because of (the show), I’m now prepared to deliver my keynote speech,” Harvey said a listener commented on the show’s Facebook page.

But, she’s also started looking ahead to who she could bring on as guests. Her parents, who have been married 57 years, are candidates for her February show, she said. And she may even bring her boyfriend onto the show to give a male and female perspective on relationships.

Joel Osteen, an American preacher and televangelist and Iyanla Vanzant, a spiritual life coach, are two of her biggest inspirations in what she writes and distributes over the airwaves. Although she’s never met Osteen personally, she said the messages he spreads will factor into the message she spreads eventually.

“She’s just an incredible coach and teacher,” Harvey said, “and I read a lot of her work for inspiration.”

The show is still in its infancy, but Harvey is happy with the feedback so far and hopes to make waves with her segment, fulfilling her role as the message’s vessel.