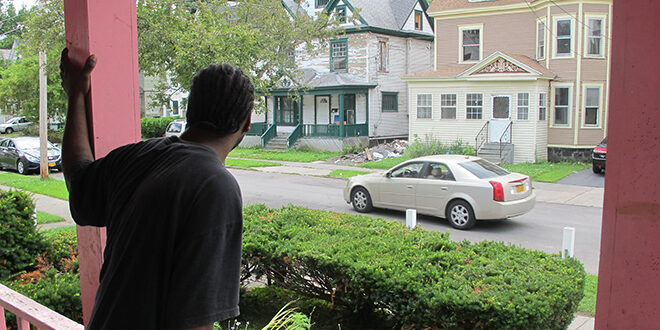 Elected leaders and eviction defense advocates are calling for stronger tenant protections and access to affordable and safe housing, as New York’s pause on evictions due to the pandemic is set to expire Jan. 15.

The halt on evictions due to COVID-related economic hardships has been in place at both the state and federal levels since the early days of the viral outbreak in 2020. The unprecedented measures to pause evictions came from recommendations from the Centers for Disease Control and Prevention (CDC), aiming to prevent homelessness and overcrowded housing conditions and mitigate the spread of the virus. As the pandemic continued, several extensions to these measures, commonly referred to as eviction moratoriums, were seen.

Renters who fill out and present a hardship declaration form to their landlord before Jan. 15 are protected by this pause on evictions through the state’s Tenant Safe Harbor Act. The declaration must report a loss of income during the pandemic, an increase in living expenses related to the pandemic or an inability to move due to financial strain or increased risk of health complications because of COVID-19.

Data from a statewide landlord-tenant eviction dashboard created by New York Unified Court System’s Division of Technology & Court Research suggests there have been approximately 176,930 eviction cases filed in courts across the state since 2020. At least 2,059 of those cases come from the Syracuse area.

With the incoming expiration of the eviction prevention measures, local legal experts expect cases at local courts to increase.

“I think we are going to see more cases filed,” said Laurie Rolnick, director of the Eviction Defense Program at the Volunteer Lawyers Project of CNY. Prior to the start of the pandemic, she says city courts would hear just under 5,000 eviction cases.

Rolnick explained there are two types of eviction cases.

“Generally, 85-90% in a normal year are based on non-payment of rent,” she said. “What that means is that if someone doesn’t pay their rent — and there’s usually no excuse, no reason, nothing that justifies the non-payment in the eyes of the court — any non-payment is used as the basis for an eviction.”

Holdover cases, the other type of eviction cases referenced by Rolnick, are filed when a landlord terminates an agreement with a tenant and the tenant fails to vacate.

The hardship declaration form, she noted, has helped tenants who have been taken to Syracuse City Court.

“Normally, there is no excuse for a non-payment whatsoever, but the Tenant Safe Harbor Act creates an excuse,” she said. “It creates a reason for a non-payment so that the resolution for the landlord is no longer just an eviction. Instead, landlords get a money judgment for the amount of money owed in back rent. This results in a judgment against this tenant, but (with this piece of legislation) the resolution of these cases does not result in eviction.”

Tenants who have presented the hardship declaration effectively have had their cases adjourned until after Jan. 15, Rolnick said. Syracuse City Court will hear adjourned cases, which Rolnick noted amount to 370, during the week starting Jan. 31.

“The cases that have not been resolved after that week will be adjourned again for a future date sometime in February,” Rolnick said.

Rolnick added it is still largely unknown how judges will ultimately rule on cases where tenants have filed the hardship declaration form.

“The courts are supposed to look at a tenant’s finances to see what happened during that COVID-19-covered time period. Did they actually lose income? Did they receive public benefits? There are factors to give guidance on their ruling, but there is no definite rule,” she said. “I think we are going to see the judges all over the place on this.”

One of her main concerns is to see how judges will rule on cases where tenants have received financial assistance but fail to use that to pay owed rent. She recommends tenants seeking to pay rent for February earmark their payments specifically for that date.

“Tenants will want their money to go toward future rent payments come February, because if someone doesn’t pay their rent after the COVID-19-covered pay period, that’s when we’re going to see (non-payment) eviction filings.”

The following are some recommendations made by Nassau-Suffolk Law Services, a Long Island-based legal assistance service:

Rolnick also encourages qualifying tenants to apply to the Onondaga County Emergency Rental Assistance program (OCERA). The county has close to $35 million in federal funds allocated to make payments to landlords who are owed rent due to the pandemic.

“You can still put your applications in. I have had several clients who have done that recently and having an application number and a date — even if it’s late — is a good idea because you never know,” she said.

As of Jan. 13, the county has distributed 4,694 rent relief payments to landlords for a total of $24 million, according to Justin Sayles, a spokesperson for the Onondaga County executive’s office. The county still has $2.3 million left in its federal funds allocation and estimates making 450 additional payments before funds run out, Sayles said, which is expected to happen by Jan. 31

In the nine months the program has been active, the county also received an additional $488,558.58 from the federal government, according to Sayles.

“The federal government reallocated dollars from communities that essentially did not do a good job implementing rent relief programming and gave the money to municipalities who demonstrated that they did do a good job,” he said. “So, it was arguably an affirmation from the federal government that our team at the Onondaga County Department of Social Services did a great job in getting this money out the door, as quickly as possible.”

Whereas most municipalities in New York distribute rent relief through the state’s Emergency Rental Assistance Program (ERAP), Onondaga County instituted its own program in order to distribute funds more efficiently, County Executive Ryan McMahon has said in the past.

The future of eviction defense

Local elected leaders say they would like to see more done for tenants during the 2022 state legislative session.

“Tenant protections have been a top priority during my time in office,” said Assemblymember Hunter in an email. “As the eviction moratorium expires, I would like to strengthen tenant protections and support funding that will increase access to safe and affordable housing.”

One area that could benefit tenants is having a statewide right-to-counsel for tenants facing eviction, which could help tenants understand their rights, Rolnick said.

“With rent relief assistance, there is a debate over whether tenants owe money. There is an argument in favor of tenants who argue that they do not owe money because the property is not up to code compliance,” Rolnick explained. “This is where it is so important for tenants to have an attorney, because sometimes tenants don’t know how to make those legal arguments without advocacy and without help.”

Housing advocates are also pushing for a statewide “good cause eviction” law, which has already been adopted in four cities along the Hudson Valley and Capital regions.

The legislation — introduced in both legislative chambers by Assemblymember Hunter and Sen. Julia Salazar, D-Brooklyn — would amend state laws to provide tenants with a baseline “right to remain,” by prohibiting evictions where the tenant is not at fault. The legislation also calls on landlords to justify rent increases greater than 3% with a “good cause.” The legislation defines good cause as substantial violations of a lease, such as failure to pay rent or serious destruction of property.

Currently courts do protect tenants against discriminatory and retaliatory reasoning behind an eviction, Rolnick noted.

According to the Community Service Society of New York, a statewide social services group, good cause eviction laws would cover 1.6 million renter households across the state. The group estimates that would cover half of the state’s renters.

Beyond legislation, housing advocates in Syracuse see tenant unions as a way to continue fighting evictions and protecting tenants.

Stephanie Kenific, an organizer with the Syracuse branch of the Party for Socialism and Liberation and the Syracuse Tenants Organizing for Power (STOP!) Coalition, criticized the effectiveness of rent relief programs at this stage as offering too little too late.

“Tenants can no longer turn to the government for help remaining in their homes, but an emerging tenant movement across the state will have to rise up, and neighbors will have to protect one another,” Kenific said. “Buildings without tenant associations must organize them as a first line of defense. Associations that already exist must redouble their efforts to prevent evictions from taking place. And activists must demand the passage of good cause eviction laws, universal rent control and stronger codes enforcement.”