“Seriously, I’m not lying to you,” adult literacy instructor for LiteracyCNY Kevin Lucas said repeatedly to his English Language Learners (ELL) class. He was trying to explain the punctuation to end a sentence is known as a period. “Online and websites — that’s a dot.”

LiteracyCNY enrolled more than 450 students last year. Funding is provided by a mix of federal, state and private donations. The agency’s largest funding source is the New York State Department of Education, under the Adult Learning Education Funding Stream. Additional funds are provided by the Educational Resources Grant from the Office of Temporary Disability Assistance (OTDA), foundation and United Way grants, the agency’s annual fundraiser ScrabbleMania and individual philanthropic donations. This year, a special fundraiser is being held in honor of local adult literacy advocate Ruth Colvin’s 100th birthday. The hope is money raised by the celebration will establish an endowment to continue the agency’s work well into the future. 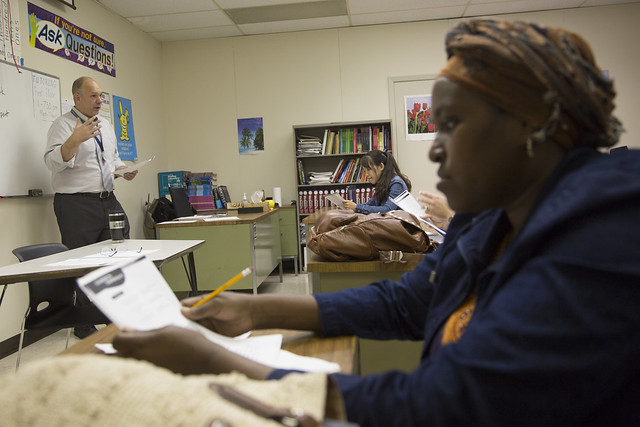 Lucas, a certified English as a Second Language instructor with 13 years’ experience, has been with the agency for five years. He first started teaching ESL when he moved to Japan. He says living in a country where he knew little of the native language helps him relate with his current students.

Thus his ELL classes with LiteracyCNY not only teach English language skills but help students understand budgeting, life skills such as where to shop for the best deal, how to establish credit and explanations on American traditions and customs.

“I hope to help them better their living situation,” he said. “Imagine trying to establish credit in a new country or buy a house. Many who start in my class are the first of their family to come over, so not only are they trying to learn the language, but learning how to prepare a life for their family who will soon join them.”

Some of his current students include a mother and daughter from Iraq, two from the Congo and others from Cuba, Puerto Rico, Sudan, China and the Middle East.

Last month, Lucas devoted time to explaining Halloween, including why some of his students’ kids might be upset with them if they don’t go out trick or treating. The class covers many little things like this, people would not know unless explained by a native.

“It could be scary having people come up to your door and not know why,” he said. “So I explained what to expect on Oct. 31. If they don’t want anyone to stop at their house, to turn their front light off.”

Homework assigned mid-October also went with the theme and was called “Scary Business.” In class, students went over their answers aloud at first and then took to the white board to practice writing sentences.

Next a question on why scared was used in a sentence not scarer. The sentence: “They’re scared of the ghost.”

Lucas explains that when you describe someone’s condition, it is a verb ending in -ed. “We can do that with a lot of verbs. Example: Confused,” he said. “I confuse you with grammar, but you’re all confused.”

The class chuckles and next moves on to discerning commas from apostrophes. 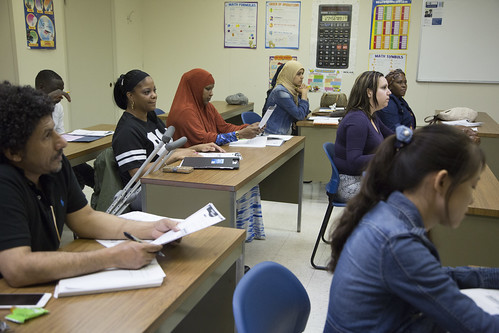