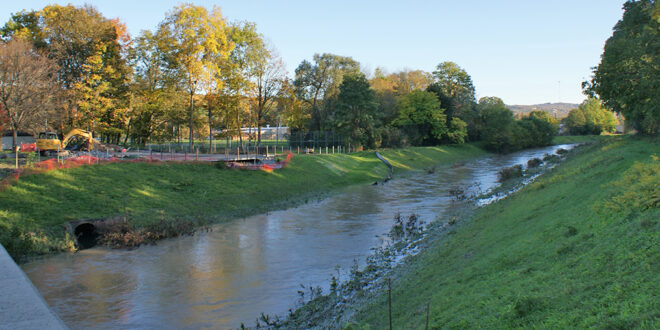 Onondaga creek flows through a corridor largely owned by the city of Syracuse between Dorwin Avenue and Kirkpatrick Street. A new access point at Meachem Field, 121 W. Seneca Turnpike, is being added. | Thad Green, The Stand

Project will improve access to creek by Seneca Turnpike

Meachem Park is undergoing a makeover that will add scenic elements for visitors at the section near Onondaga Creek.

The city of Syracuse through the Local Waterfront Revitalization Program (LWRP) is working to plan, design and construct a project along the creek.

Based on input from three public meetings across 2018 and 2019, the focus was narrowed to the Valley neighborhood, and the city of Syracuse eventually settled on Meachem Park as the project site. The large, open creek banks by the park made for an ideal location.

“Meachem is a pretty active park,” said Owen Kerney assistant director of the Division of City Planning. “It’s used by not only city residents, but people all over the county.”

The feeling among residents was that the park had plenty of active recreational features, from youth sports leagues to the indoor skating rink. The residents were looking for more passive recreation: a place to sit, relax and take in the scenery.

“People want to be close to the creek, and want to connect to the creek,” Kerney said. “In downtown and other areas, it’s very much covered up, but this portion is very much visually available.”

Danny Liedka, president and CEO of Visit Syracuse, says the project may not have a huge impact on tourism, but will directly benefit the community.

“One thing we learned during COVID was that people like outdoor adventure and the ability to get out with their families and have some space,” Liedka said. “Adding another venue is very welcome.”

The design was created to include a deck overlooking Onondaga Creek, landscaping, walkways and other amenities such as benches and trash cans.

After the design was completed, the project was put out to bid at the beginning of 2021. The contract was awarded in the spring, and construction followed immediately afterwards.

Construction started with tree removal, prepping the ground for concrete and asphalt and putting in screw piles to support the deck system.

The project progressed into last summer, but was held up due to manufacturing delays that caused the deck materials to arrive late. Much of the project, including the pouring of concrete and asphalt, could not be continued until completion of the deck, which did not start until this October.

After the deck is completed, the walkways, lighting and other site furnishings can be installed. The planned timeline is for the project to be completed before the end of the year. However, features outside of the initial project will be added later.

In June, Mayor Ben Walsh proposed allocating $55,000 from the America Rescue Plan Act fund towards installation of a covered pavilion in Meachem Park. The measure was approved by the Syracuse Common Council in September.

The pavilion is a prefabricated structure that will tentatively be installed next spring following a 20-week lead time.

“The public said we’d love to be able to walk across the street, get an ice cream, get a sandwich and relax in this little pavilion area,” Kerney said.

The city is also looking into improving other access points, particularly along the Inner Harbor. But at this time, these upgrades are only in the design phase. The city is open to receiving additional feedback from residents on how to enhance the creek.

“We’re ready to work with people on creative ideas they have,” Kerney said.

Eric Fabio, a resident of the North Valley neighborhood, compares the city adding multiple access points along the creek to the Canalway Trail, a network of approximately 300 miles of multiple-use trails across upstate New York. He believes it will help the site.

“I think having broader connectivity throughout the creek channel is going to make it more of a recreational attraction,” Fabio said.

Steve Seleway, co-founder of Creek Rats, a group that works toward revitalizing the environment along Onondaga Creek, sees the project as a positive step towards completing the creek as a whole.

“Once they get the last part of the (Onondaga) Creekwalk done up to Dorwin (Avenue), it’s just an added incentive to bike, run and canoe,” he said.

Liedka says he appreciates the city’s commitment to improving the area around Meachem Park.

“It’s great they’re investing there; that’s really kind of a hidden gem,” Liedka said. “I’m glad to see that other people see it that way, and they’re putting some money into it, because that’s a nice little treasure on that side of town.”