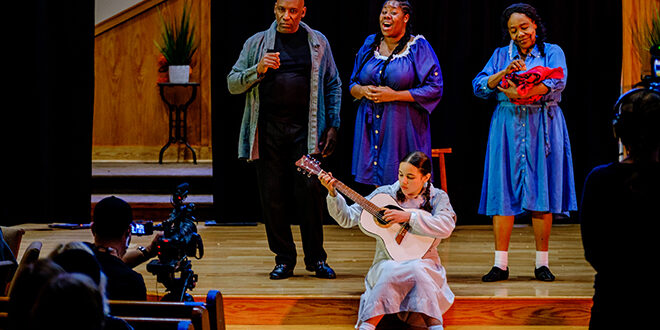 Neva Pilgrim and the Society for New Music produced an opera called “Libba Cotton: Here This Day,” based on the life folk musician Elizabeth “Libba” Cotten, who lived in Syracuse’s South Side.

The performance was staged Sunday, Oct. 17, at Tucker Missionary Baptist Church (TMBC), located a couple blocks from a statue and park dedicated in the musician’s honor. Libba was a Grammy Award winning folk and blues singer who spent the last years of her life in Syracuse. In 1983, she was recognized as Syracuse’s First Living Treasure. Her portrait was later commissioned and placed in City Hall, where it still hangs to this day.

Libba was born Elizabeth Nevills in 1893 in a place called Carrboro just outside of Chapel Hill, N.C. She began learning the guitar there as a child and worked as a domestic for most of her adult life. After a 30-year failed marriage to Frank Cotton, Libba moved to Washington, D.C., to be near her daughter. There she continued her domestic work, and eventually through a chance meeting, began working for Charles Seeger and his family.

Libba was left-handed and a self-taught banjo picker, guitarist and singer-songwriter. She played on right-handed instruments turned upside down. This unorthodox approach caused for her style to be very unique. She played melodies with her thumb and alternated chords and basslines with her four fingers. Her style, which became known as “Cotten picking,” was different, yet, full and rhythmic.

Seeger’s family was musical, as well, and connected in the music industry. While working for the Seegers, Libba would sometimes borrow one of their guitars and play them some of her tunes. One of the family’s favorites was a tune called “Freight Train,” which she had written as a child. Seeger became so impressed with her that he used his connections to help her get started as a performing and recording artist  and next perform public concerts and tour. By this time, she was already in her 60s and had never performed publicly before. “Freight Train” was also recorded by Jerry Garcia of the Grateful Dead and others, helping to elevate Libba’s status as an artist.

The opera at TMBC focused upon three stages of Libba’s life. The company reached out to some local talent, both former and current, to perform the parts. Libba Cotton as small child was portrayed by Noa DeRosa Anderson, as a young woman by Jessica D. Montgomery and as an older woman by Dr. Jacque Tara Washington.

Danielle Cummings, who performs regularly with a popular local band called Brownskin, portrayed Libba’s mother. “The opportunity to sing in this opera was a great experience for me,” Danielle said. “It gave me a chance to sing with some of the people my mother used to sing with and allowed me an opportunity to sing something different than what I normally do. I was even taught a little bit about reading music.”

The libretto for the opera was written by Kyle Bass. I wasn’t quite sure what a libretto was, so I inquired. Bass explained it is all of the words in the opera. I then went on to ask, did he mean the spoken words or does that include all of the singing, too. “Put it this way, every word that you heard,” he said, “I wrote.”

As did Danielle, I learned something, too.

Bass is currently working on a new play called “Salt/City/Blues,” which will premiere at Syracuse Stage next year.