Syracuse Model Neighborhood Executive Director Angela Wright speaks on vacant parcels in the South Side during the Nov. 17 Town Hall.

Last Tuesday, Nov. 13, Tony Rusyniak was on the brink of a deal that he believed would help the South Side progress.

For the past two years, Rusyniak, owner of the former Sears building on South Salina Street, had been courting Crouse Hospital to relocate its drug rehabilitation center in the building, which his family purchased 30 years ago. Rusyniak and his father intended to use the three-story building as an apartment, but quickly found that no one wanted to live there. They converted the building to records storage and currently do business with more than 200 companies in Onondaga County, including Crouse.

“They had 40 potential sites. Then they narrowed it down to 10, then to three,” Rusyniak said. “My building didn’t have to be rebuilt and had enough parking for Crouse.”

Then, disaster struck. South Side residents and neighborhood volunteers denounced the center, making it clear that they did not want it. Following the opposition, Crouse announced it was dropping a $20 million plan to relocate its facility.

On Saturday, Nov. 17, Rusyniak joined about 25 other residents and business owners from the South Side at Danforth Elementary School to discuss the failed deal and what would happen next. The meeting was organized by the local nonprofit group Tomorrow’s Neighborhoods Today Sector 3 Southside. The discussion was moderated by Vaughn Irons, a Syracuse native and CEO of APD Solutions in Atlanta. Also present were Angela Wright, executive director of Syracuse Model Neighborhood, doing business as Model Neighborhoods, and former Syracuse mayoral candidate Alfonso Davis. 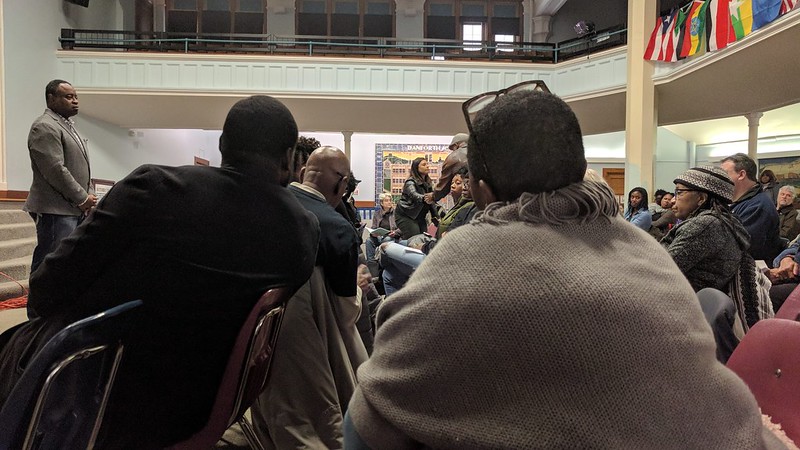 Consultant Vaughn Irons calls for more involvement from business leaders and property owners in changing the neighborhood during the South Side Town Hall meeting.

Bey went on, saying that while it was not his place to make a judgment, he personally opposed the deal because of the service that would be provided, calling it “court-ordered rehab” rather than a place for addicts to voluntarily be rehabilitated.  Crouse’s current Chemical Dependency website makes no distinction between the two.

“There’s a difference between people who make the choice to go [into rehab],” Bey said. “We have to be clear about what the rehab center is.”

After finishing his address, members of the audience spoke up. Many highlighted the absence of any representative of Crouse at this meeting and the consensus was that they should have come. Audience members also spoke out on the lack of transparency offered by Crouse. One member said she had “no idea” that the deal had been worked on for more than two years and only heard about it at a recent TNT meeting this fall.

Other questions revolved around the specifics of the Crouse project itself, with many residents concerned that the center would attract drug dealers to the area looking to prey on recovering addicts. Others also pointed out the general need for renovation in the area, with vacant properties serving as home to squatters.

Rusyniak said during an interview with The Stand that Crouse had contingencies for the residents’ concerns. According to Rusyniak, the rehabilitation center project would not have had a street entrance, making it harder for drug dealers to openly loiter near the building. Instead, a café would have been placed at the building’s street side. Additionally, Crouse was planning to give $50,000 annually to provide for community upkeep.

“Crouse was ready to do everything that this neighborhood wanted,” Rusyniak said. “But no one knew what they wanted, and this thing fell through.”

Tensions did rise when former Syracuse mayoral candidate Alfonso Davis addressed the audience, saying that Rusyniak was only looking for the best deal for himself and citing a 2006 instance when then Mayor Matthew Driscoll tried to have a Wal-Mart set up in the South Side, only for Rusyniak to allegedly turn the deal down. Rusyniak called the allegations false and said that he had no offers for the building until Crouse’s project.

Other items on the meetings’ agenda included a presentation by Angela Wright on several of the projects that Model Neighborhoods had planned for the area. Wright gave further details on the South Salina Street Community Café and spoke about the amount of vacant parcels currently suffering from tax issues in the South Side.

“What do you want the community to look like? When we say no to something, what are we saying yes to?” Wright asked the audience.

Residents pointed out the issue of effective communication of these meetings. One resident suggested robocalls and group texts to help foster communication. Irons, who had been moderating the flow of the conversation, spoke up to call for more involvement from property owners.

“For the first 100 years of this country, the only people who could vote were the ones who owned property. Why?” he asked. “Because change starts with them.”