In Syracuse there is local food, where “the total distance that the product is transported is less than 400 miles from the origin of the product,” according to the Consolidated Farm and Rural Development Act as amended by Congress in 2008.

Then there is uber-local food, where the distance is reduced to no more than 10 miles, according to “Productive Neighborhoods,” a study on urban agriculture published by Berger Partnership in 2011.

On July 2, Marva Hudson, a representative of Ministries of Love at 318 W. Newell St., provided Exhibits A and B of uber-local food to about 15 members of the Partnership for Onondaga Creek (POC) who had gathered at the Brady Faith Center for their monthly meeting. Exhibit A was a salad made of lettuce, zucchini and grape tomatoes. Exhibit B was a bean soup. 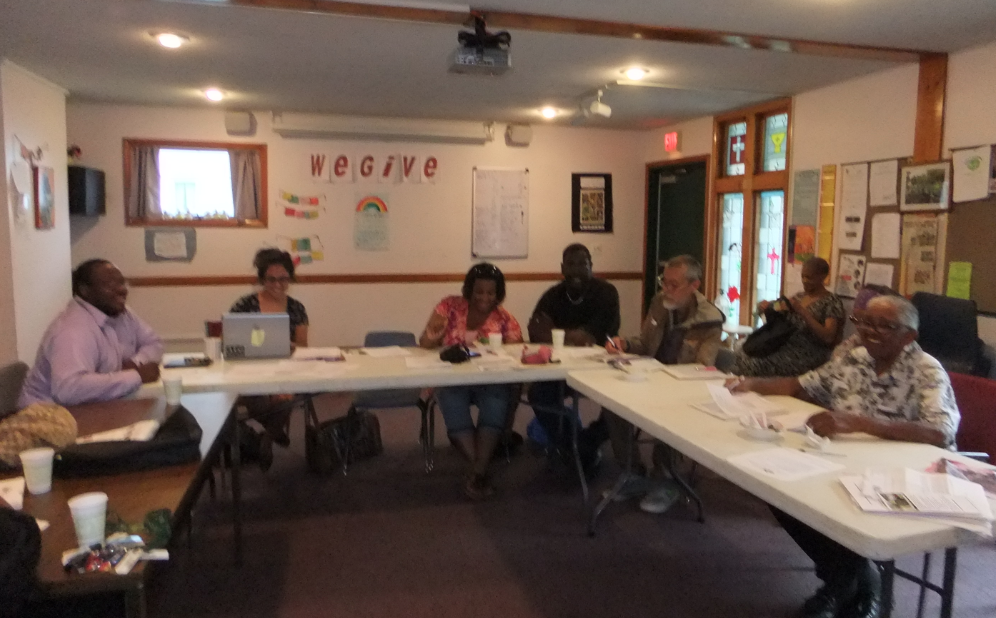 Both exhibits supplied the fuel for POC constituents to sit through a two-hour long meeting to kick off its summer season.

A look at the map indicates that the garden is only 17 blocks away from the Brady Center, making the salad and soup hyper-uber-local foods and turning the POC members into eager hyper-uber-locavores as they avidly enjoyed the food.

Having nourished their bodies, the neighbors were prepared to face a tight agenda, whose first order of business was a presentation by John Hennon.

Hennon is embarked in a crusade called Clean Computers for Kids, which he hopes to turn into a non-profit organization. The immediate goal of his campaign is to equip students of city schools with 2,000 computers by the end of the summer break. He estimated that currently 20 percent of these students don’t have a computer at home. “This situation perpetuates a digital divide between the haves and the have nots,” he said. “Access to a computer just for a few hours in school or at a library isn’t enough to make a significant difference in the children at the developmental and learning levels.”

He revealed that he had been involved in a drive with a similar goal last year but he failed.

He attributed the frustrating outcome partly to lack of media attention. He had planned to deliver up to 100 computers on July 21, 2012, in the atrium at City Hall Commons, but, as the local media turned its focus to a shooting in Aurora, Colo., which occurred the day before, they didn’t properly publicized the delivery event, he added.

A second obstacle that he encountered came from the local non-profit organization Mercy Works at 1221 S. Salina St., with which he had hoped to work. “They stopped taking my calls,” he said.

Joanne Stevens, an activist with  Syracuse United Neighbors, offered to connect Hennon with the chief executive officer of the Southwest Community Center, Sharon Owens, to see if it could be used as a drop-off point for computer donations and to advertise them among the parents of youngsters participating in the center’s programs.

Another of the items on the agenda was the development of a new board for the POC, one that could continue upholding the purpose stated in its bylaws: “to educate the public about and advocate for environmental justice issues in the Greater Syracuse area including but not limited to issues relating to the value and importance of Onondaga Creek as a community resource.”

“The partnership is a membership-driven organization. The minute one walks in its doors, he or she becomes a partnership member,” said Aggie Lane, facilitator of the meeting. “We need a new board with passion to keep the magic going.”