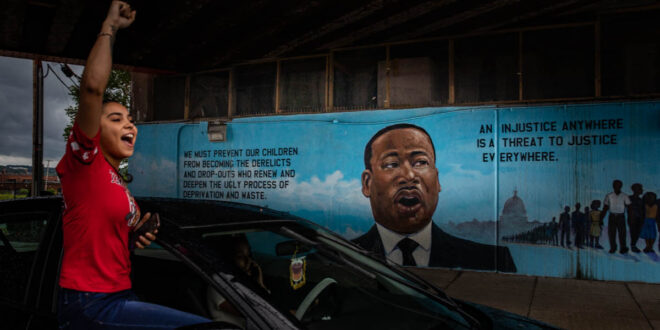 The timing on this image, judges agreed, is incredible. Maranie Staab took first place in the #CuseMinorityImpact category with this shot taken during a Last Chance for Change march at the edge of downtown. The background features a London Ladd mural.

Last night, The Stand revealed the top picks in this summer’s 2020 Photo Contest.

Held in place of the annual Photo Walk due to the pandemic, we wanted to devise a way to still document the city this summer in photos. In planning the event, now as a contest, we hoped many would enter, sharing images showing how the community continues on despite the coronavirus, how children are coping and creative changes made to allow for social distancing.

As we discussed planning, George Floyd was murdered and protests broke out nationwide. We wanted to also capture how Syracuse responded.

To incentivize participation, we even added prizes.

We want to thank all who entered, our judges and prize sponsors: Light Work, Salt City Market and Joe’s to Go.

We’ve also partnered with the Urban Video Project (UVP). Next week, winning images will be exhibited large and proud downtown, projected onto the Everson Museum of Art, 401 Harrison St. You can drive by to catch the display or grab some food and sit and watch. Projection begins at dusk, playing on a loop, until 11 p.m. on both Friday and Saturday, Aug. 28 and 29.

Winning images and many additional entries will be published in the upcoming September print edition and online, archived on The Stand’s Flickr page and posted on our Instagram account.

As an added bonus, we’re excited to see winning photos — from all sides of Syracuse — to soon be re-shared on the City of Syracuse’s Instagram account.

Congratulations again to all our winners!

Some of the standouts:

When judges met Aug. 10, many were in agreement on choices for the first place rankings. As we reviewed, an entry in the #CuseBLM category especially stood out and became the best in show.

Kristi Russo took this photo at a Black Lives Matter youth rally with Latin Science fifth graders. Judge Terry Baker said he liked this image on many levels. “It’s black and white,” he said, which makes it special. “There’s great saturation and so much good photo journalism. It makes me think of the photographer Eugene Smith.”

In the #CuseCOVIDSummer category, we were looking for shots that best captured this new normal for the city. Winning images featured the phenomenon of drive by birthdays to an empty Skiddy Park and a mask-wearing statute.

Many judges felt this shot by Hilary Donohue of the Near Westside park represented our new normal well, showing the park completely vacated. Typically filled with children and activity and even serving as host to block parties to multicultural fairs, now the park sits quiet. “This photographer caught the tenor of the time,” Judge Terry Baker said. “We have many great parks in our city, but many weren’t able to be used (to their full potential) this summer. Then the rainbow is just icing on the cake!”

First place caught the attention of all the judges, who said it was witty and paid close attention to details and framing. Photographer Jayson McDowell writes: “Legends Wear Masks: Syracuse is united by sports, especially those at Syracuse University. Is Ernie Davis posing for the Heisman, or keeping his distance in our “New Normal?”

In the #CuseSocialDistancing category, we sought a display of the creative ways the city and its residents continue on safely. Then in the #CuseCOVIDChildhood category, we were looking for a shot showing the city’s youth — from coping with this current crisis to enjoying childhood innocence. First place went to DJ Igelsrud for her image of children at the Hookway while social distancing.

“This one hit all the boxes,” Judge David Haas said. Bob Gates added, “In this shot, she just got everything. All the feet are different, all the hands are different. You get a different structure in each case but that distance is there, and the colors are all different,” he said.

Judges felt an image Maranie Staab captioned “starting em’ young,” really captured this moment in time. Judge Megan King felt it depicted a child dealing with more than just COVID. “We have so many overlapping things going on at this time, which this image shows,” she said of the second-place winner. “It’s an image that draws a viewer in.”

Judge Bob Gates noted how the photographer captures the girl’s expression with her furrowed brow. “Fierce, anger … determination,” he said is what you can see behind her mask.

An unexpected image by Jessica Dapson, took third place in the #CuseBLM category.

When conjuring what a winning Black Lives Matter photo might be, many may think of protesters with signs. But several judges pushed for this image of a newly married gay couple. Judge Cherilyn Beckles commented that seeing Black love is so important right now. “The way they are looking at each other is so beautiful,” she said. “This image gives a change of pace to all the protest images. It is very unexpected.”

Bob Gates agreed and said it was really touching for someone to submit a picture that says Black Lives Matter in a larger sense. “(Protest shots) are terrific, but this image says ‘BLM’ beyond that — that two gay men can get married and it can be celebrated.”

In second place, Maranie Staab again nabbed a winning spot. Photographer Stabb wrote “This young queen radiated confidence and solidarity as a crowd of demonstrated walked by her home in Syracuse.”