While South Side residents wait for a grocery store to be established in their neighborhood, some seek out food banks to fill their basic needs, officials at local community centers say.

“Our pantry helps serve people who have no other means of feeding their family,” said James Outlaw, a deacon at the Bellegrove Missionary Baptist Church, at 219 W. Castle St. “If they tried other pantries and can’t get food or if it’s toward the end of the month, we’ll try to help them with a few bags of canned goods until their food stamp allowance can come.”

The church offers an emergency food pantry for residents living in the Southwest area. Most donations come from members and local businesses such as Wegmans. The pantry doesn’t have set hours but sees an influx toward the end of the month, Outlaw said. 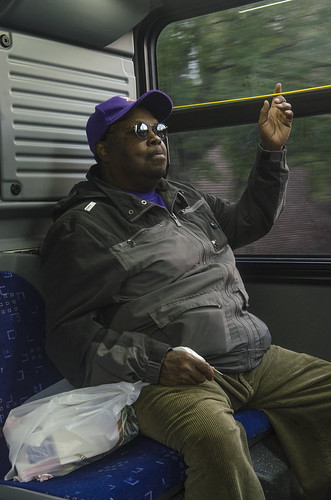 State Street resident Charles Goldsmith rides the bus to and from Green Hills Farms on South Salina Street to get a few grocery items for his dinner. The trip took over an hour and cost him 2. | Jim Tuttle, Staff Photo

The Southwest Community Center at 401 South Ave. offers a food pantry for residents on Tuesdays and Thursdays. For South Side residents, food pantries are an alternative to paying high prices at corner stores. A gallon of milk costs $4.95 at a corner store, said Valerie Hill, director of community services at the center. 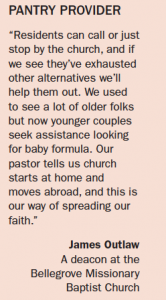 “When residents get their groceries at the corner stores, they don’t get the full value of their food stamps, and they can’t buy fresh fruits and vegetables,” Hill said. “People will sell their food stamps for a ride to a grocery store, too. In the end, families are being cut short of the food they should be receiving.”

In 2009, Jubilee Homes, a nonprofit housing and development organization, bought a building on South Avenue in hopes of creating a local grocery store. This summer, the organization began talks with PriceRite, a discount grocery store, to move in to the space. Walter Dixie, the executive director of Jubilee Homes, said he believes a grocery store would open doors for residents.

“There is no supermarket in this area and that has led to unhealthy eating,” said Dixie, who lives on the South Side.

A supermarket would help the area economically by providing better value to shoppers and bringing about 70 jobs to the community, Dixie added. 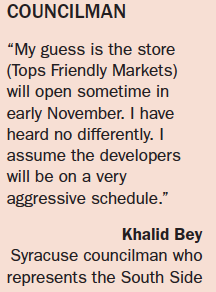 In early September, this initiative welcomed good news when the Central New York Regional Economic Development Council recommended the state provide $1.5 million toward the project, Dixie said. He also applied for other federal funds and would like to raise $3 million overall.

“When businesses start fleeing, it makes it harder for other businesses to come into the area,” Dixie said. “But PriceRite has started to branch out into upstate New York.” 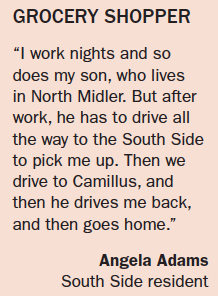 “Every few years, there’ll be a rumor that a grocery store is going in one of the plazas. This year, there has been a lot of talk about a Tops opening around Thanksgiving, but that building is still empty,” Adams said.

Syracuse Councilman Khalid Bey, who represents the South Side, says Tops Friendly Markets is slated to open in the Valley Plaza on South Salina Street.

Adams buys most of her groceries at a Wal-Mart in Camillus to save money, but the effort takes a toll. Her son picks her up on the South Side to drive to Camillus after they are finished at their jobs, both night shifts.

“With gas it doesn’t even out, especially when we’re both exhausted and my son has to drive all over Syracuse just to get a good price on groceries,” Adams said.

Adams still goes to the corner store for everyday necessities, even if the price is almost twice as much.

“If I need something for my grandchildren, I can’t wait to go to Camillus. I pay the price at the corner store because that’s what every resident over here has to do until a grocery store comes,” Adams said.