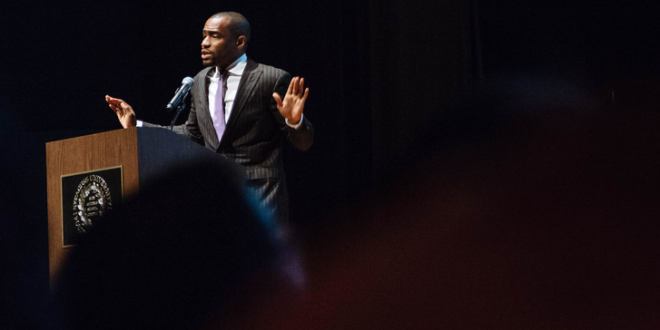 The shooting death of former South Side resident Gary Porter at the hands of a police officer in the James Geddes Housing Development on Father’s Day touched off a host of community events throughout the summer: two meetings at the Fountain of Life Church on the South Side, held June 21 and 25; a Celebration of Unity at Skiddy Park on June 30; a doubleheader of marches in downtown on July 18, and a Community & Cops: Ready Set Engage gathering at Thornden Park on Aug. 28. The National Action Network Syracuse Chapter, St. Lucy’s Church, Project X and Black Lives Matter Syracuse were among these events’ organizers.

Porter’s killing, along with recent similar incidents of police-caused deaths of black people across the nation, were covered at the inaugural Symposium on Race and Our Communities: Race, Justice, Violence and Police in 21st Century America, which took place in Goldstein Auditorium on the Syracuse University campus Sept. 1.

Marc Lamont Hill, a political commentator for Cable News Network (CNN), made a repeat visit to Syracuse this year to deliver the symposium’s keynote address. In January, Hill held an analogous role at the 31st Annual Martin Luther King Jr. Celebration in the Carrier Dome. 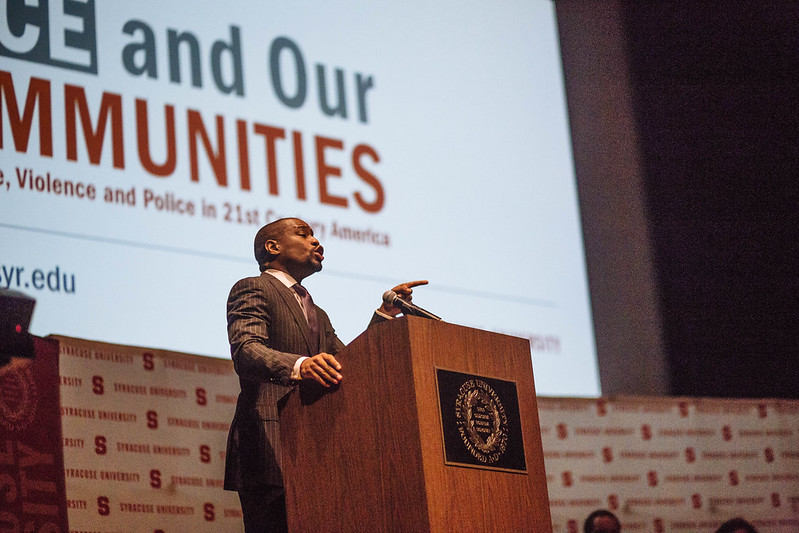 Hill spoke about urban neighborhood’s lack of trust in the police and also the need for gender justice. | Photo provided by Michael Santiago for TheNewsHouse.com

Hill’s speech was intended to focus on “the racial inequalities throughout the United States, and offer ways to take action to address oppression and reduce racial violence,” according to a SU press release.

In his remarks, Hill advocated the adoption of a “restorative model of justice where people are made whole again” and said that policing has to be an engagement with the community.

He added that people are not committing crimes, they are committing acts, and certain acts that are not threats to public safety nor to society, such as being in a public space, get arbitrarily criminalized in some American cities. As a result, neighborhoods no longer have confidence in the police, which they perceive as an occupying force, he said.

Hill attributed this approach in part to the broken windows theory, introduced in the article “Broken Windows: The police and neighborhood safety” by criminologists James Q. Wilson and George L. Kelling, which was published in March 1982 in The Atlantic Monthly.

“The broken windows theory’s assumption is flawed because empirically there is no relationship between disorder (exogenous variable) and crime (outcome),” Hill said. “This theory is based on a market logic and ideal where efficiency and outcome are the biggest things. Institutions such as markets don’t have feelings, they have interests.”

Keith Bybee, director of the Institute for the Study of the Judiciary, Politics and the Media, was part of a five-member panel discussing Hill’s speech. Bybee seemed to agree with Hill.

“The broken windows crime-fighting theory is based on a confusion and on an erroneous assumption,” Bybee said. “It confuses lowering the crime rate with creating the sense of safety and civility; it assumes that police officers will become agents of the local community and will help it feel safe by patrolling it on foot, but this doesn’t happen in many cities.”

Bybee suggested training law enforcement officers to be servants and agents of the communities in which they work. 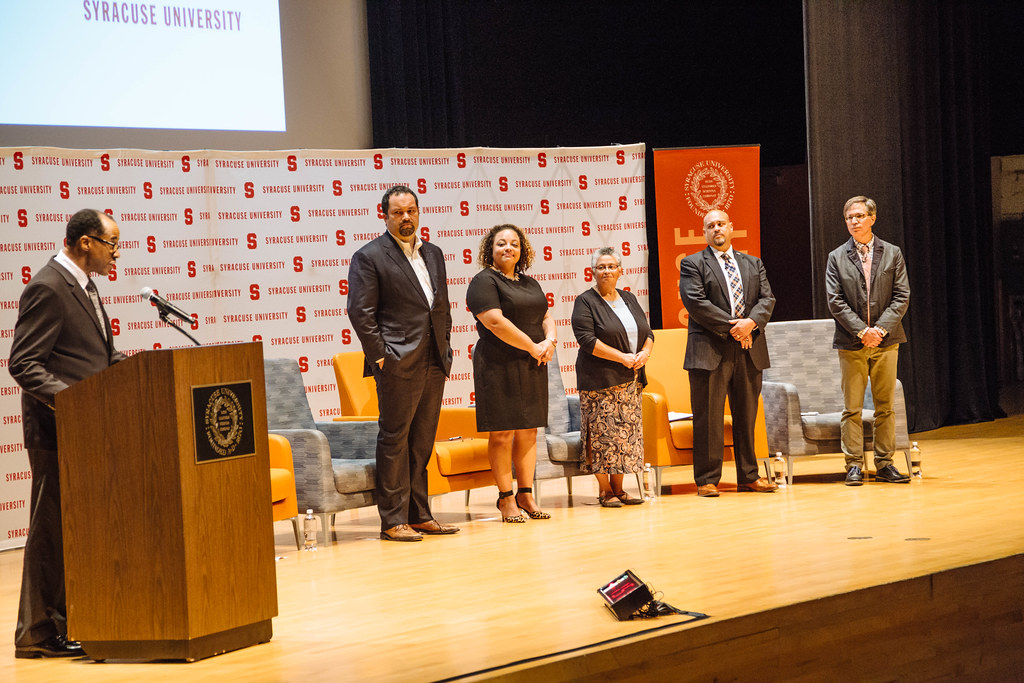 Another panelist, Tony Callisto, who is a former Onondaga Country chief deputy sheriff, concurred with many of Hill and Bybee’s statements.

“The broken windows theory was a benchmark moment,” Callisto said. “Vulnerable people with no real options, but with only desperate choices, became criminalized.”

He added that there are failures in the systems aimed at police officers as these systems train them with a warrior mentality, with a focus on officer survival.

Callisto recommended going back to the philosophy of Scotland Yard’s creator, Sir Robert Peel, who in his “Principles of Law Enforcement” (1829) said, “The police are the public and the public are the police.”

“The systems have to be fair and transparent. The police should reflect the community it serves in every possible way. A police officer has to be a guardian to the community, serving it with dignity and respect,” he added.

Hill responded to Bybee and Callisto’s comments by suggesting that changes in the training systems may not be enough due to widespread misperceptions. Hill said that studies other than Wilson and Kelling’s conclude that the perception of disorder is colored by race and class.

“A police officer tends to perceive black subjects as being older and more violent than their white counterparts,” he said. “It is a subjective interpretation, a script in the officer’s mind, viewing individuals of a certain race as being more likely to be purveyors of violence.”

To address this issue, Hill said: “We have to police the police. It’s not just a bad apple but a bunch. The way to prevent police misconduct is to let the police know that people are watching it.”

An audience member, Yusuf Abdul-Qadir, who is director of the New York Civil Liberties Union Central New York Chapter, asked a question on how to build a broader discussion in a place like Syracuse, which he said is “ground zero for concentrated poverty.”

Hill replied: “Join an organization, and organize and build together toward a project for freedom, but you have to be willing to work against the odds, developing a sense of humility and a sense of listening.”

“There has to be outreach from institutions toward the neighborhoods that surround them,” she shared. “We have to listen to what folks are saying, meet the people’s needs and connect with the community on their own terms, not on ours.”

Having seen representatives of the Alliance of Communities Transforming Syracuse (ACTS) and Inter-Faith Works of Central New York among the audience, Gonzalez suggested, “Go to places where people are and bring them together with us to continue the dialogue. Join ACTS or Inter-Faith Works.”