Two groups met in the cathedral of a local church Thursday evening in the hopes that both could gain a better understanding of the relationship between them.

“The Police and You” is a planned ongoing forum to join the Syracuse Police Department and South Side community in conversation and to be held monthly at various churches, the first meeting which was held Nov. 13 at the Greater Evangelical Church of God in Christ, located at 4325 S. Salina St. This first meeting was organized in the wake of Michael Brown’s death in Ferguson, the St. Louis suburb that sparked months of riots this summer.

“It’s necessary that we make ourselves more available to the community,” said Police Chief Frank Fowler in front of an audience of more than 40. “It will let us do our job better, and our job is to serve you.” 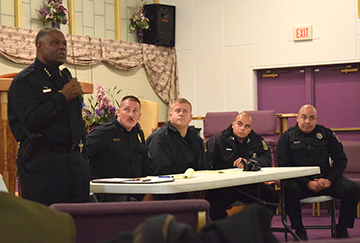 Police Chief Frank Fowler grew up near Ferguson, Mo., and said he doesn't want Syracuse to follow in the suburb's footsteps.

Fowler and church pastors said the main purpose of the forum is to brainstorm and to see things from different perspectives. By fostering communication, both groups said they’re hoping to cultivate a beneficial relationship in the future.

Fowler himself is a native of St. Louis, and Ferguson is “right on the edge of his hometown,” he said. Brown’s death this summer sent ripples throughout the U.S., and the SPD said it wanted to make sure the negative effects aren’t seen here.

“We don’t want to see anything of that nature in Syracuse,” Fowler said. “I think we’re making a great beginning right here.”

A number of community members approached a pair of microphones to voice their concerns, opinions and suggestions. Y.L. Wright, Sr., a South Side resident, suggested curfews in certain areas, or even deputizing citizens in the chance that policemen can’t make it to a scene fast enough.

“A lot of the shootings and killings, like the one at Kirk Park recently, they’re keeping people from coming out,” Wright said. “People just want their community back. They just want their life back.”

City Councilor Khalid Bey was also present and asked Fowler and deputy Jamie Locastro how the SPD plans to improve communications in the coming months.

“We feel it’s important to have a supervisor in the South Side community,” said Locastro, who will be the predominant “face [you] you can put with the force,” he added.

The deputy is part of the SPD’s third platoon, which is on duty in the afternoon, and he said he’ll be open to talking with anyone if any concerns arise throughout the day.

He stressed that, although the police’s availability is of the utmost importance, citizens also need to meet the force halfway –– SPD received 200,000 calls over the last year, he said, and by refraining from calling in non-emergency situations, the community can ensure that officers don’t travel for no reason.

More than one community attendee asked about the force’s roster itself –– they said it might help to have more officers of color in patrol cars and natives of Syracuse enforcing the law. This would help them empathize with citizens, Bey said.

Fowler said he’s able to give preference to black recruits, as well as those that live in Syracuse. By selecting people that actually grew up here, it places a higher stake on the area they’re tasked with protecting.

“If you live in DeWitt, we don’t care about your challenges,” the police chief said. “I don’t mean to offend you, but that’s not the reason we’re here tonight. We’re hear to talk about the city of Syracuse.”

When reports of Brown’s death began last summer, stories erupted from both sides of the conflict –– police that said they were doing their job, and Ferguson citizens who cried foul, leveling accusations of police brutality. Fowler said he thinks “The Police and You” forum will prevent that disconnect from widening in the future.

And in cases when it does widen, the officers present said they will strive to bridge it whenever possible.