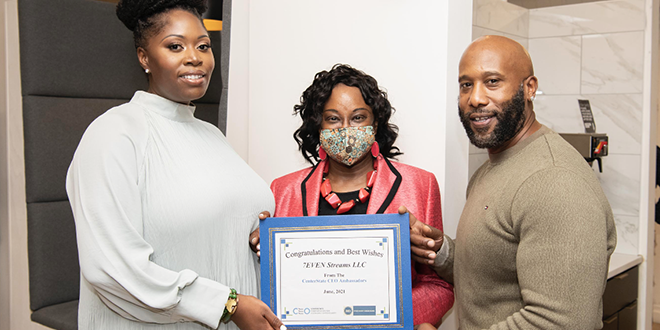 Victoria Coit launched a plan for a development on South Salina Street through her company 7Even Streams last summer alongside David and Simone Hills. The site will serve as a community space that a select group of entrepreneurs will be able to rent. The vision includes a fresh meat market and a ghost restaurant — one set up for delivery and takeout only — where two to three entrepreneurs can obtain two-year leases.

The development will also be the home of the company’s philanthropic program called PH.G. This seven-week series gives previously incarcerated men more than 30 skills to grow and build a new life.

Coit’s venture is an example of how residents can use local entrepreneurship to not only improve but serve their community.

All of these efforts focus on minority and women-owned businesses, which Jennifer Tifft, board president of the Syracuse Development Economic Cooperation, said shows Coit’s determination to help her community.

“The fact that she wants to focus on development within that particular part of our community, I think, shows a real willingness to invest in that neighborhood, the people who live there and work there,” Tifft said.

The South Salina Street development is still in the planning stages, but when completed, it will result from the many interests Coit prides herself in acquiring. This comes from her need for change and the enjoyment of watching things evolve.

By 2007, Coit decided to move to Washington D.C., where she worked for a major construction contractor and explored her passion for food during her time as a chef at various restaurants. But Coit realized it wasn’t the career path she envisioned. So she returned to Syracuse to rediscover her place in her hometown.

“I never really was engaged with my city before I left … I challenged myself to come back, be engaged and look at it with different eyes, and see what part I played inside of this puzzle of a city,” she said.

In 2012, Coit returned, deciding to experience Syracuse as if she was rediscovering the city for the first time. Her discoveries pushed her to start her first magazine, Salt Of The Earth, which focused on local, Black women.

Due to the busyness that comes with the birth of a newborn, the magazine was discontinued. But Coit’s journey to act on her dreams didn’t stop. In 2016, she started a second magazine, Cuse Culture, with her close friend Vanessa Campbell. This served as an extension of SOTE, highlighting Black men and women in Syracuse.

It next turned into an organization offering networking events. Coit sees being in the right spaces as important to the strategy needed to succeed as an entrepreneur.

This is something that Simone, a partner in the enterprise, said Coit has always done.

“She’s always been that way — bringing people together, networking … taking pride in our community, and building something to be proud of,” she said.

Coit’s time in D.C. also gave her a different perspective, allowing her to see Syracuse in a new light. “I knew there were great people here, but I also didn’t see any of that being highlighted.”

“I was peeling away the layers of what my role was inside of all of this,” Coit went on to describe.

She says she took that time to push herself to take the leap no matter how scary.

“I challenged myself for one year to act. No matter what,” she said. “If I was scared, if I didn’t feel like I had resources or people backing me, just to act. One thing led to another, and then it just became my philosophy.”

Toluwanimi Fajolu is a journalism student at the Newhouse School