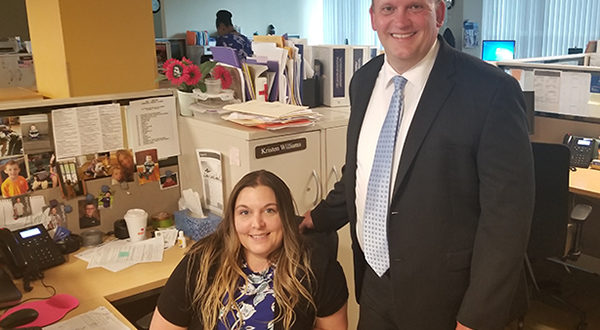 If you’ve ever fled a burning building, you’ve perhaps emerged with a deeper appreciation of firefighters, the heroic figures who run toward the same danger you’re fleeing. Yet for all their bravery, firefighters prepare for those moments. Not so with probation officers. Running into a smoked-filled house to save the occupants isn’t in their job description, yet that’s what Probation Supervisor Scott Snyder did last month while his partner, Probation Officer Kristen Williams, phoned 911.

At a brief-but-moving ceremony May 20 in the probation department’s lobby, Onondaga County Executive J. Ryan McMahon II honored the pair along with another probation officer, Kristen Jackson. On May 3, Jackson got a weird feeling that one of her clients was in trouble, so after a brief period of hemming and hawing she paid a surprise visit to his home on Onondaga Hill.

“I didn’t plan on working that night,” she said.

Her intuition and willingness to act saved a life. Jackson had noticed the 38-year-old probationer was acting strangely earlier that day. Now she found him in an upstairs bedroom of his parents’ house unconscious. The mother was wailing, “He’s dead! He’s dead! He’s dead.”  The family’s yellow lab, normally no fan of Jackson, was watching her every move. Jackson somehow kept a cool head and administered a dose of Narcan and then another when the first didn’t work.

“I was fumbling around with it,” Jackson recalled. “It wasn’t a quick and easy thing.”

The kit she’d retrieved from her car was an older one and tricky to use, especially for someone who had never used it in a real emergency. There were caps from a vial and an applicator to remove, and the ends of each that had to be connected a certain way. Then the apparatus had to be turned three-and-a-half times. Then one-half dose was to be administered into each nostril. That’s a lot of problem solving when your client — whom you saw hours earlier — has turned blue from a heroin overdose and you’re doing chest compressions because he has no pulse.

Now, thanks to Jackson, he’s very much alive in a rehab facility, and there’s hope. Jackson deemed it a shame that the public often misunderstands drug addiction, failing to see it as a disease — one that defies a one-size-fits-all solution.

“A lot of people don’t have any control once opiates take over,” she said.

If that sounds a little soft, maybe it’s because probation officers themselves tend to be misunderstood. There’s the no-nonsense side, of course, the guns, the badges and the power to send offenders to state prison. But the job is more complex than that. POs tend to be half cop/half social worker. Often a probation officer is the only human being holding an offender accountable, their only positive influence. Friendships or something close to it form. It’s common for POs to become invested in some clients, which can lead to heartbreak.

“You get close to them when they’re doing well. Then sometimes they relapse, and it’s state prison,” Snyder said.

Conversely, clients who permanently get their lives together aren’t usually inclined to stay in casual contact with their POs and provide cheery updates. “It’s not something they want to relive,” Snyder said.

So even when a PO has an unqualified success, he or she might never know it.

Yet for all the thanklessness of their jobs, probation officers are indispensable as the life coaches of the criminal justice system. By delivering the right message the right way at the right time to the right offender, a PO can transform a potential prisoner into a productive citizen, and spare taxpayers millions.

“They save souls,” McMahon said with no hint of overstatement.

The POs who were honored seemed a little embarrassed by the media attention. Snyder and Williams insisted that they did nothing special except drive down a narrow street on the North Side, notice that the rear of a house was on fire and try to help anyone who might be inside. They say a lot of people would have done the same — but they also acknowledge that some people who saw the fire did nothing.

In any event it was a confusing scene that bordered on the comical. Because Snyder and Williams approached from the back of the house they didn’t have an address to give to the 911 dispatcher. With the side yard blocked by a tall wooden fence, Snyder, a member of the department since 1999, tried to scale it to get to the front of the house on Park Street. Alas, his Spiderman mindset were not precisely aligned with his age and conditioning.

“I saw you do that,” Williams chided her partner during an interview with The Stand, “and I thought, ‘What’s he doing?’”

Snyder had the same thought. He climbed down off the fence and elected to drive around the block to the front of the house. A neighbor informed him that there were, indeed, people inside.  Snyder forced open the door, but no one came out. He entered the house and found a young girl and ushered her outside. He then searched the rest of the house and escorted three more people to safety. He and Williams remain perplexed why the residents didn’t flee the smoke-filled home on their own.

“I got the sense they were trying to handle it themselves without getting the authorities involved,” Snyder said. “I don’t know. But their house was on fire.”

Jackson is left wondering about divine intervention and the miracle of timing. She speculates that had she visited the house much earlier, her client would have been alert and not in any obvious danger only to pass out and die after she left. Or if she had gone later, it might have been too late to save him.

Snyder, meanwhile, a father of two who mainly works a desk job, said he occasionally has wondered if he’d put himself in danger in order to save someone else. Everyone likes to think they’d do the right thing, he said, but how can you be sure?