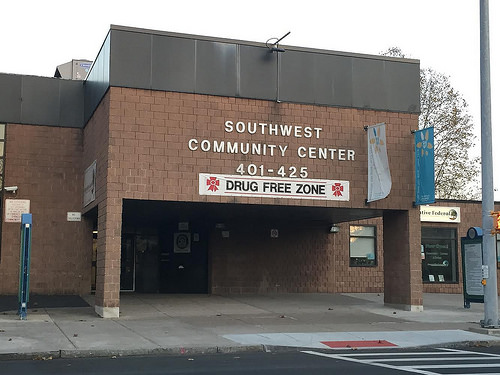 Federal program could give South and Southwest sides help they need

City officials began applying last month to a federal program that would designate parts of Syracuse’s South and Southwest sides as a “Promise Zone.” The distinction would give those areas preference for certain federal programs for a 10-year period, according to the city’s director of research, Janet Burke.

“It would make us more eligible for tax credits, jobs, and job readiness and training programs,” Burke said. “The goal is to get all people out of poverty and into affordable housing, get jobs and continue education.” 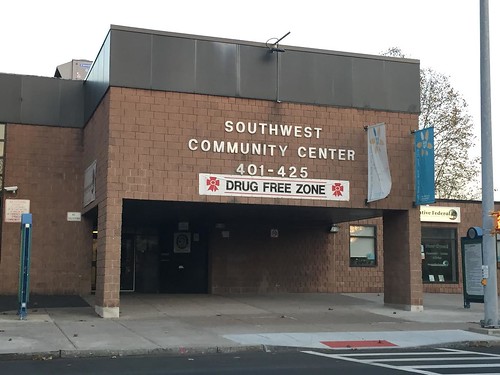 The Southwest Community Center is a hub for some important meetings about the city’s future. | Molly Smith, Staff Photo

The Promise Zone program is run by the U.S. Department of Housing and Urban Development in conjunction with the U.S. Department of Agriculture. President Barack Obama announced in his 2013 State of the Union Address that he would designate 20 Promise Zones nationwide in high-poverty urban, rural and Native American tribal communities. Those selected would be assigned a federal liaison and up to five AmeriCorps VISTA volunteers to work with federal agencies, coordinate key stakeholders, and facilitate programs that address the community’s needs.

Burke presented the idea for the Syracuse Promise Zone before the Common Council in November.

Councilor Khalid Bey oversees the city’s 4th District that encompasses the proposed zone. He expressed concern that the program, if Syracuse’s application succeeds, would include the right decision makers. He said he wants to ensure that the program would benefit people who need it most.

“Granted that we are successful at acquiring the distinction and the right people are involved with its administration, the value of job training and economic development opportunity cannot be overstated,” Bey said.

The first Promise Zones were announced earlier this year in a ceremony at the White House. The government said it would accept a second round of applications until Nov. 21 — the deadline for which Syracuse officials said they would apply.

Burke said her office is arranging the official application, but the main coordinator behind the process is the city’s Department of Neighborhood and Business Development. Commissioner Paul Driscoll said the application has six main criteria aimed at improving general welfare in the South and Southwest sides of Syracuse.

Driscoll said that this area is defined as a “distressed community,” as opposed to being classified as “stable” or “transitional,” and therefore requires more financial and personal investment. While being designated as a Promise Zone does not automatically guarantee additional funding, Driscoll said he hopes the title will help. 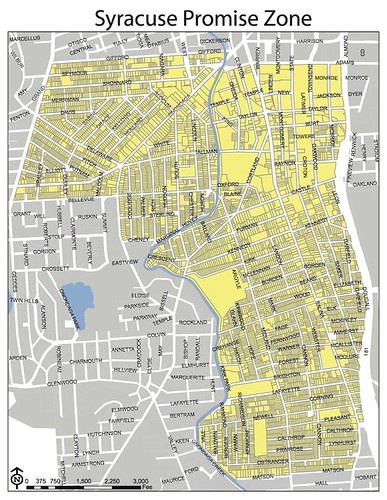 This map shows the section of Syracuse’s South and Southwest sides that would be part of the Promise Zone. | Courtesy of the Common Council

“It’s a promise of getting extra attention,” he said. “Will the designation increase funding? It’s very vague.”

While Driscoll said he is unsure of the potential long-term advantages of the distinction, he said he foresees the immediate benefit of forcing the city to inventory the activity going on in those areas to address the topics. He listed several groups he said he planned to involve in the process: the Syracuse City School District and Say Yes for educational improvements; Home HeadQuarters and the Greater Syracuse Land Bank to address affordable housing; and CenterState CEO, a Syracuse-based business leadership organization, to assist with economic development.

All of these parties would convene at the Southwest Community Center at 401 South Ave., which Driscoll refers to as the “symbolic and geographic hub” of the efforts. The Syracuse Model Neighborhood Facility, a nonprofit community resource network, is run out of the center and has already become involved with the Promise Zone application.

“The success depends on all partners coming together as more of a wraparound resource,” said Valerie Hill, director of community services for the neighborhood group. “We are here to help identify the youth and families that need help in those areas to bring them together with the community.”

Hill said the building is a “great asset” to the project in bringing people together. She said she believes education is the area with the most room for improvement.

“There’s a big gap among kids at the center going to city schools,” she said.

To address educational improvements, Pat Driscoll, director of operations for Say Yes, described the necessary planning and implementation phases of the Promise Zone. He stressed that families need to have better access to resources already in place to truly reap the benefits of the distinction.

“The focus area for education is creating a collaboration of different agencies to support educational initiatives,” Driscoll said. “We have to ensure the supports are working.”