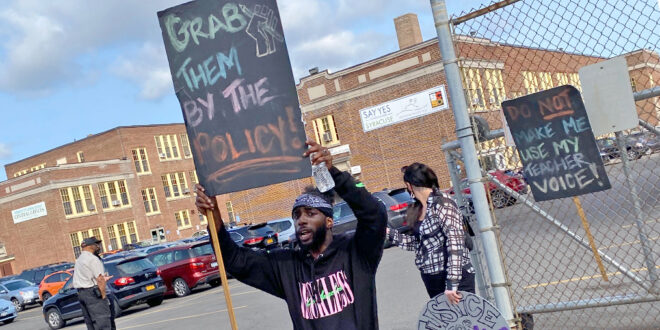 The school board voted unanimously in late August to only have virtual classes from Sept. 14 through Oct. 2, meaning students will be learning at home, from behind a screen … if they have one. In-person instruction is not scheduled to begin until early October and will only bring students back into the classroom a few days a week.

Parents, clergymen, students and teachers assembled the morning of the district’s scheduled first virtual-learning day across the street from STEAM at Dr. King to express their concerns regarding the district’s plan. They noted thousands of students in the district lack the technological means to access their education.

Joshua Michael King, a former fourth-grade teacher who is also raising his two brothers, both SCSD students, helped to organize the protest. He was so alarmed by the district’s failure to equitably provide the necessary means for each student to have equal access to education that he quit his teaching position to solely advocate for students and teachers.

During the rally, he added a message to the former teachers he’s worked with: “To all my colleagues that are inside buildings trying to figure out how to make this work, I applaud you.”

Other speakers joined King, each seeking to address a different shortcoming in the district’s remote learning model. Samantha Pierce, a mother with four students in the district, said that children with developmental disabilities often fall by the wayside in the SCSD’s normal education model. She was anxious that the online model will leave these students behind, and she was disappointed with the district’s lack of commitment to providing equal educational opportunities to all students.

“We are tired of having to fight so hard,” she said, “and we need the school district to fight at least as hard as we do every day.”

Curtis Chaplin, a local activist who helped organize the Last Chance For Change movement this summer, also spoke on the sheer lack of technology among SCSD students. Unlike surrounding suburban school districts, SCSD’s challenge is not only providing computers or similar devices for students, but providing access to WiFi. Chaplin stressed coronavirus is not the defining barrier to students, but rather, exposed the myriad barriers that have gone unaddressed for too long.

King concluded by expressing his frustration at the district’s technological shortcomings. Throughout the rally, he and other protesters were testing the reliability of the WiFi that was supposedly emanating from Dr. King Elementary School, which is a SCSD designated WiFi hotspot. After an hour of trying to sign on, not a single protester was successful, leaving them to speculate whether the students were faring any better.

The sight of administrators entering Dr. King from side entrances– ostensibly to avoid confrontation with the demonstration across the street– vexed protesters, who questioned why they were not at the district office attempting to fix the WiFi problem.

Demonstrators next headed to the district office by marching through Pioneer Homes, chanting, “We need equal rights, treat our children right,” and “Education matters.” Residents came to their windows and doorways to shout their support as well.