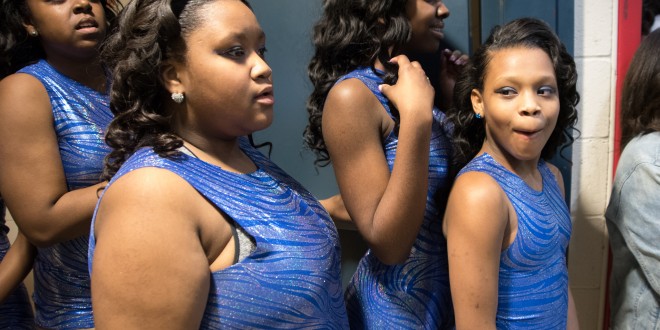 Nyasis Stenson, 16, Lemaj Greene, 14, LeAsia Pinckney, 14, Donyahe Jones, 11, members of the Cuse Divas majorette dance group, look at other performances as they wait to perform at the "Bring it to the Burg" dance competition March 5, 2016, at Obama high school in Pittsburg, Pennsylvania. (Photo by Daniel Hinton)

Outside the studio — where black curtains are drawn over the windows and the sounds of music and talking are muffled — one might not guess there are members of a hard-working majorette dance team inside, pushing themselves. 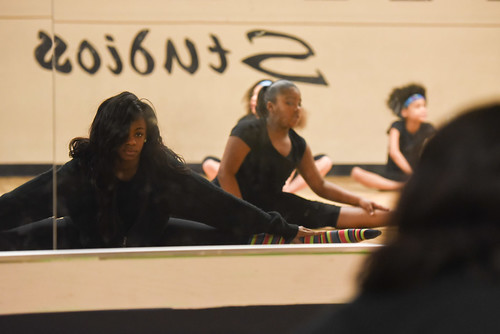 Girls ages 5 to 18 are doing crunches and push-ups, warming up for their practice. It’s mostly quiet except for the few groans of that last crunch.

It’s the week before competition, and Dejuan Hightower, 28-year-old co-owner and coach of CUSE DIVAS, expects his dancers to go hard.

Hightower brings order and quiet by saying “listen.” He and Tierr Rivera, 29, co-owner and director, expect the girls to be respectful and not to talk over one another.

The junior division, 5- to 11-year-olds, is about to start one of its routines for competition.

“Everything today needs to be full out,” Hightower says as he walks around the studio dance floor, evaluating the girls in their beginning stances.

He and Rivera started the group in October 2014 as an outlet for youth in the community. Hightower said they saw there was nothing for the kids and wanted to do something about it. He wants to ensure the girls on the team know they can do anything. 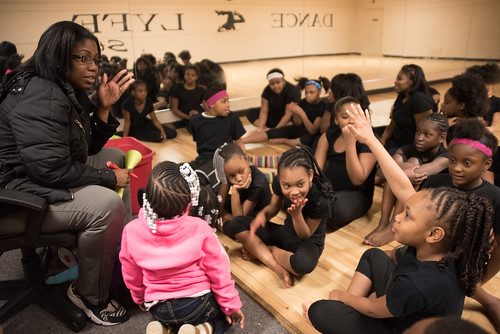 Tierr Rivera, the managing director of Dance 4 Lyfe studios, answers a question from one of the members of the Cuse Divas majorette dance group during a practice in Syracuse Feb. 25, 2016. | Photo by Daniel Hinton

“We wanted to push them and let them know that they can be whatever they want to be in life,” he said.

The team, a majorette dance competition group, has already won more than 50 trophies at competitions, including in Mississippi, Ohio, South Carolina and, most recently, Pennsylvania, where they placed first in the senior division of the field show.

“It’s been a lot, but well worth it,” Hightower said.

Each age group, including the boys dance team CUSE KINGZ, practices for an hour and a half every weeknight and sometimes Saturdays.

When they’re approaching a competition weekend, the dancers put in more hours, with everyone staying at the studio from 5:30 to 8:30 p.m., Rivera said.

Hightower does not hesitate to stop the music and review the step that needs work. He walks through the dances with the girls. 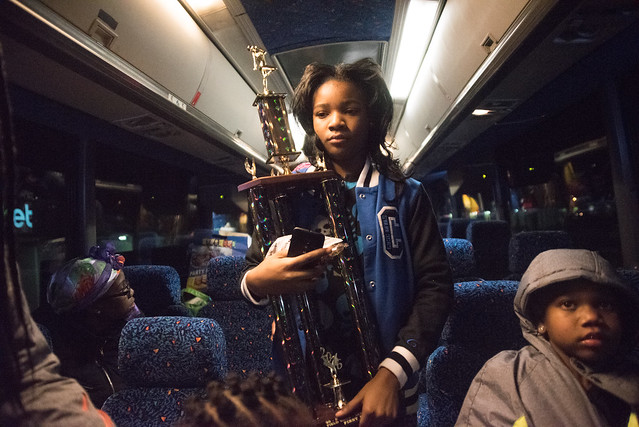 Along with pushing the girls in the studio, the owners put a high priority on education. Neither wants to see the girls compromise their studies. So they’ve instituted a rule: Anyone who is failing must sit out during practice — come to the studio, but sit and watch.

“Education is important to us,” Rivera said.

Rivera sees how this has affected others on the team, not just the member who is failing. It makes the others work harder so they don’t have to sit out, and it motivates them to help one another with homework and studying. It has happened only twice.

The girls must finish their homework before practice starts, and they can get help from the owners and other girls at the studio. Progress reports must be handed in, and occasionally the owners will do school check-ins, especially if a parent asks them. 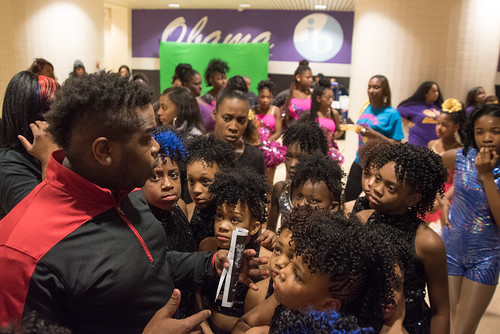 Dejuan Hightower, co-founder of Dance 4 Lyfe Studios, talks to members of the Cuse Divas majorette dance group before they performed in the “Bring it to the Burg” dance competition March 5 at Obama high school in Pittsburgh, Pennsylvania. | Photo by Daniel Hinton

Hightower and Rivera have established a family atmosphere on the team and at the studio. They ensure the girls not only have finished homework but also have eaten dinner and properly worked out.

Hightower said he wants the girls to learn how to balance school and the team and to understand that being on the dance team is a privilege, not a right.

Kenziia Rudolph, Leasia Pinckney and Princess Yeboah, all 14, are captains who joined as beginner dancers and have been on the team for about a year.

The captains are there to be role models and help keep the younger dancers in line.

“We have to make sure everybody is getting along with everybody and not split in groups,” Rudolph said.

The captains help maintain for others and themselves what Hightower and Rivera have set in motion.

“I think it’s kind of hard because you gotta make sure you’re a role model, and you gotta keep on pushing yourself,” Pinckney said.

The captains enjoy being on the team, going to competitions and helping foster bonds.

Rudolph said she loved being a role model for the kids and leading them to make sure they’re doing the right thing. Rivera said she feels they are helping the community by what they’ve done with the dance team, which already has outgrown its second studio space.

“One less older girl that’s not running the streets, that’s not getting into trouble,” Rivera said. “I just want them to be above what’s expected of them. And I want them to have that experience that some of their parents aren’t able to give them.”